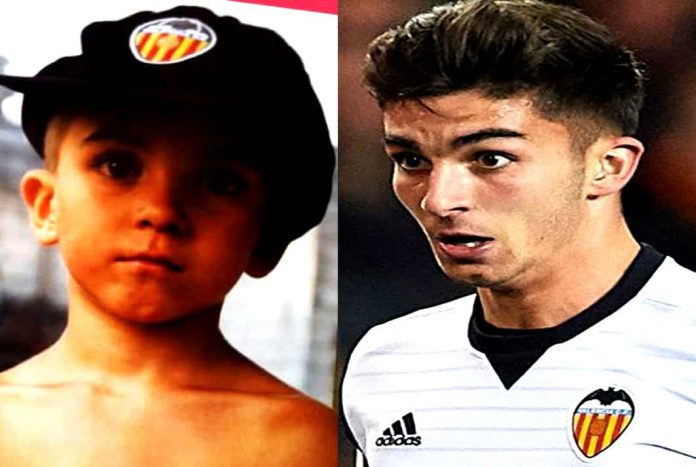 In the nutshell, this article tells you the Full History of Ferran Torres. We begin from his boyhood days, to when he became famous.

To whet your autobiography appetite, see his childhood to adult gallery — a perfect summary of Ferran Torres’ Bio.

Yes, everyone knows he is that new kid on the block- a wide star known for his work rate and penchant for unpredictability, creativity, and close control at speed.

However, only a hand few of football lovers have considered reading Ferran Torres’ Biography. Now, without further ado, let’s begin.

To begin with, Ferran Torres García was born on the 29th day of February 2000 at the municipality of Fois in Spain.

The Spanish winger is the first son and second of three children born to his mother and father.

Like his legendary countrymen, Andreas Iniesta, Xavi and Sergio Ramos, Ferran is a bonafide Spanish national.

In fact, he grew up at his birthplace in Fois alongside his older sister and childhood best friend “Arantxa” and little-known kid brother.

Growing up at Fois, Ferran was an ambitious soccer enthusiast who had a thing for watching soccer on TV and trying to imitate the skill set that he saw star players exhibit. Sometimes he got it right, other times he got it wrong.

Ferran Torres’ parents were on the receiving side when he shoots the soccer ball wrongly. They oftentimes get disturbed by the noise of smashing vases, breaking glasses and figurines.

However, nobody did anything to steer him away from his passion for football and love for his one and only beloved club – Valencia CF.

As a little child, Ferran Torres’ parents did stimulate his passion for football by taking him to Valencia CF home stadium Mestalla where he saw many games as a kid and bore witness to the rise, pitfalls and triumphs of the Spanish club.

Truth is, both his dad and mum were middle-class earners who could afford to pay for match tickets for themselves and their children.

As a child, Ferran was particularly close to one of his parents- notably his super friendly dad.

In that sporting manner, young Ferran grew up as a fan of Valencia and had dreams of playing for Los Ches as well as embracing a career that would take him far beyond the shores of Spain.

Ferran Torres’ parents, by the time he was 6 years of age happily saw to his enrollment at the youth systems of Valencia where he began an earnest career buildup in competitive football.

While Ferran was at it, he began to model his game after a number of local and national footballers including the legendary David Villa who was a star player for Valencia at the time.

As expected of a kid with ambition, Ferran had no issues with rising through the ranks of Valencia’s youth system as he was a bright prospect with the makings of traits that define wonder-kids.

As such, Ferran got the rare opportunity of making his debut for the reserves of Valencia when he was only 16 years + some days old in October 2016, a feat that set him aside as one to watch out for in the distant future.

Ferran’s good form and consistency eventually saw him achieve promotion to Valencia’s B-side ahead of the 2017–18 campaign, a development that brought his first team aspiration closer to fulfilment.

Valencia knew Ferran’s desire and didn’t waste time to enter a promising contract extension with the lad in October 2017 before promoting him to the club’s first team on 1st January 2018.

Upon securing promotion to Valencia’s first team, Ferran did well to prove his worth by earning start-ups in Copa del Ray, La Liga and Champions League matches.

It was such early key appearances that brought fame to his doorstep.

To begin with, the winger became the first player born in the 2000s from Spanish teams to score in the champions league when Valencia’s had 4-1 victory over Lille in November 2019.

Any winger as tall and handsome as Ferran could be at best with a wife or worse, without a girlfriend. Surprisingly, Ferran is single at the time of writing and has no sons or daughters out of wedlock.

The winger understands that he doesn’t need the help of a girlfriend (at least yet) to get his priorities straight especially as he is set to grab more opportunities that playing top-flight football has to offer.

Behind the scenes of Ferran’s amazing rise and skill on the ball is a supportive family. We bring you facts about Ferran Torres’ family members starting with his parents.

About Ferran Torres’ Father and Mother:

Ferran’s mom and dad have been passionate fans of Valencia before the winger was born. They did well to take him to games at the Mastella including the memorable 2008 Copa del Ray final that was won by Valencia.
Both parents make it a point of duty to attend Ferran’s games and do regularly give him lessons on the need to stay humble and behave himself.

Ferran has two siblings. They include his older sister Arantxa and a little known younger brother. Arantxa is arguably the closest person to Ferran’s heart and custodian of his childhood stories.
She knows everything about her little bro and they both share an anchor tattoo on their feet. The tattoo reminds the duo not to let anything weigh them down.

Away from Ferran Torres’ immediate family life, not much is known about his family roots as it relates to his paternal and maternal grandparents.
There are no records of Ferran’s uncles and aunts while his nephew and siblings are yet unknown at the time of writing this biography.

Did you know that Ferran Torres has a likeable persona that reflects traits of individuals whose zodiac sign is pieces? He is humble, emotionally intelligent, hard-working and passionate.

In addition, Ferran has no problems with revealing facts about his private and personal life. When the winger is not on the field of play he can be found engaging a number of activities that are known to be his interest and hobbies.

They include travelling, swimming and spending a good time with his family and friends.

Luxury speed boats are meant for cruising by big vacation spenders. The winger is a big spender.

Regarding how Ferran Torres makes and spends his money, his net worth is at an estimated sum of 1.5 million Euros at the of writing this bio.

Contributing streams to the winger’s wealth include the salaries and wages he receives for playing first-team football. In addition endorsements with brands like Adidas does a lot to boost his net worth.

As a result, Ferran is not alien to the pleasures of life that includes cruising the street of Spain with exotic cars and living in expensive houses. What’s more? Ferran spends big on vacation and parties real hard.

Football fans are likely to forget Facts, but they remember childhood stories better. This is why in this last section of Ferran Torres Biography, we provide you with little known or untold facts about the winger.

We Broke down his Salary:

Since you started viewing Ferran Torres Bio, this is what he has earned.

Did you know?… The average man in Spain who earns around €1.889 a month would need to work for at least 2 years and 1 month to earn €45,898.8 which is the amount Ferran Torres earns in a month (at the time of writing).

What is Ferran Torres’ Religion?

Ferran Torres’ Family are Catholics and a practising one at that. In fact, he takes devotion to the Virgin Mary serious and never baulks at making the sign of the cross whenever he steps into the pitch of competitive play.

As we did earlier state, Ferran has matching tattoos of an anchor with his older sister. The art serves to remind them not to give room to anything that can weigh them down. In addition, Ferran does have a little cross tattoo on his wrist.

Did you know that Ferran Torres has an overall FIFA rating of 78 at the time of writing? Notwithstanding, it would only be a matter of time before the winger achieves his full potential rating of 86 considering the energy that he puts into play.

About his Birthday and Date – 29th February:

Torres was born on the 29th day of February. As such, he only gets to celebrate his birthday once in every 4 years.
Fortunately, he did celebrate it in February 2020. In addition, his birth year 2000 was the year which Ridley Scott’s “Gladiator” hit cinemas.
Did you know that it was also the year that the popular Oprah Winfrey magazine was launched? Now you know!

FACT CHECK: Thanks for reading our Ferran Torres’ Childhood Story Plus Untold Biography Facts. At LifeBogger, we strive for accuracy and fairness. If you find something that doesn’t look right, please share it with us by commenting below. We’ll always value and respect your ideas.