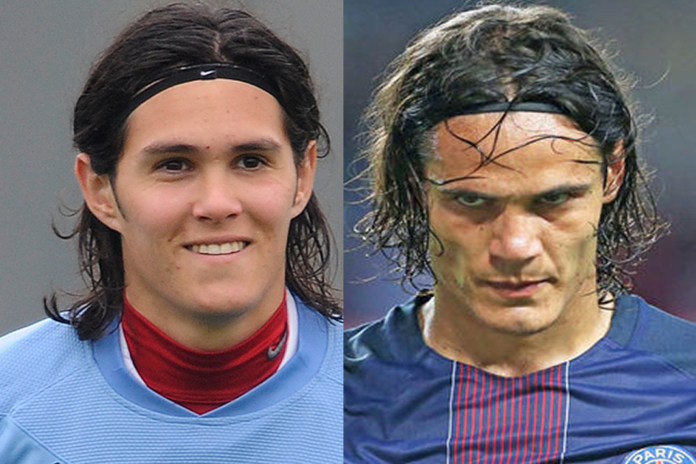 LifeBogger presents the Full Story of a Football Icon best known by the Nickname; ‘El Matador’.

Our Edinson Cavani Childhood Story plus Untold Biography Facts brings to you a full account of notable events from his childhood time to date.

The analysis involves his life story before fame, family life, and many OFF and ON-Pitch little-known facts about him.

Yes, everyone knows about his abilities but few consider Edinson Cavani’s biography story, which is quite interesting. Now, without further ado, let us begin.

Coincidentally, his national teammate Luis Suárez was born in the same city (Salto), just a month earlier in January. Edinson was born as the last child of a family of only 3 male children.

Growing up, he found love in football thanks to being encouraged by his hard-working parents who made sure that Cavani “always had food and clothing,”. He thrived in the urban surroundings and congestion of Salto.

The fruits of the tight street pitches that Cavani played in as a child were later seen in his brilliant technique and mental strength. Basically, Cavani constantly played against older peers, who would most times roughed him up.

Cavani did so at the age of 9 in 1996, bringing an end to unofficial matches with the ‘old cargoes’  as he calls them in his area.

Right from his early years, Cavani looked to be on the path to stardom. Though once he moved to Danubio, he took a while to adjust. Thankfully, he adapted and soon became one of the best youngsters in the youth academy.

He signed his first official youth contract with Danubio, Montevideo’s most successful youth academy, who produced the likes of Álvaro Recoba and Diego Forlán.

Playing professional football at a late start was tough for Cavani. However, coming from a family of footballers helped matters. His footballer dad and elder brother gave him all the needed help to kick start his career.

Edinson Cavani came up through Danubio youth system to make his debut for the first team in 2006.

Edinson Cavani built his physical prowess and determination to lead the frontline, which got him a national breakthrough. He was part of the Apertura 2006 championship-winning squad, scoring nine goals in his debut season. 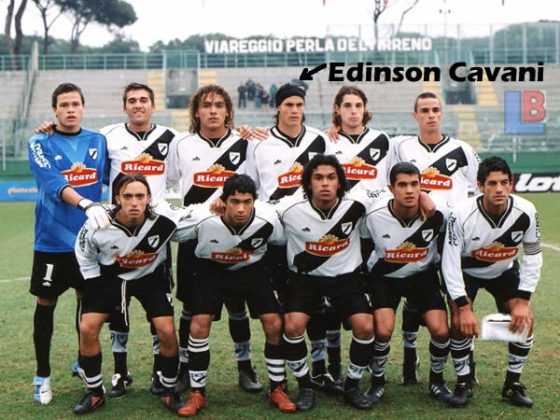 In July 2010, Cavani signed a reported five-year contract with Napoli. The rest as they often say is history.

Now let’s tell you some facts about the Uruguayan footballer’s household. Without further ado, let’s begin.

His Dad, Luis, played football at an amateur level as a young man.

Luis is a hardworking father who gave his household (3 sons and a wife) the best they could ever dream of.

He was particularly closer to his last son Edinson, who taught the antics of football and supported his career from its foundation. Luis takes huge credit for his boy’s rise.

However, paternal pride never seemed more aching as when he talks about both Edinson’s gift and his generosity.

According to Luis, “Me and Edinson used to go fishing in a beautiful lake 30km from our home. We’d take the old truck where I used to work and fish from the side. There were very big flash boats there which is owned by the super-rich.

I remember Edinson was said …’ dad, the day I triumph at football, I’m going to get you a truck and big boat like theirs.

He was 11 at the time, he had these big dreams and I would just laugh. But today, I have the biggest truck and boat in Uruguay,” he says, pointing at them.

“It’s hard to express with words the pride you feel when you see your son triumph in life, when you see him open up new paths, you see him loved by people and you see he hasn’t changed his way of being, that he remains the same humble child who maintains a low profile and lives his life simply.

Berta Gómez is the name of Edinson Cavani’s mother. The Uruguay striker’s mother has once explained how his son’s hunger cost her to give up all activities just to provide him with much motherly care throughout his career path.

His elder brother is Walter Guglielmone. He is 9 years older than Edinson Cavani, his little brother.

Just like Cavani, Walter is also a striker. He made 310 appearances and scored 109 goals for both club and country.

Edinson Cavani’s immediate older brother’s name is Christian. He is also a striker and just a year older than him.

The Edinson Cavani Family Life is indeed centered around football men and a supporting mother of the home. Quite similar to that of Alex Oxlade-Chamberlain and Henrikh Mkhitaryan.

Edinson Cavani’s love story is full of Ups and Downs and quite similar to Anthony Martial and much opposite to that of Marcus Rashford, Roberto Firmino, and Gabriel Jesus. The full story is discussed in this article.

Cavani has always been in love with his childhood sweetheart named Maria Soledad Cabris Yarrús.

They both got married and were blessed with two sons. Their first son, Bautista, was born on the 22nd of March 2011.

His second son, Lucas, was born on the 8th of March 2013. Lucas, unlike Bautista, is very fond of his dad.

Edinson Cavani however has a strong relationship with his sons. He loves to take his boys to every victory celebration.

A piece of shocking news came in 2014 when Cavani announced that he and his wife were to get a divorce, following an initial split between the two the year before. Their marriage only lasted for two years.

This was a time Cavani’s personal life went thru a rough patch. A time he really suffered from a lack of confidence on the pitch.

They separated after it was revealed he was allegedly having an affair with a 22-year-old Italian woman later identified as María Rosaria Ventrone (pictured below) from Caserta not far from Napoli where Cavani played at the time.

It was this picture that led to the split up and divorce.

His ex-wife (Maria) said the following about him before the divorce. 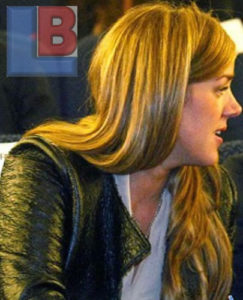 “I do not trust this man. Do you want to trust a husband who leaves his wife just a few days after the birth of their child?…

When our son Lucas was born, I learned that he was with another girl. It was a shock when I saw the nasty pic. He explained the benefits of me giving birth in Uruguay to be quieter than in Naples where we would be besieged (by the press).

He wanted to leave me there to feel freer and enjoy the fact that I would be busy building our new life. When I returned, I tried in every way to save our marriage.

I did not want to remove my children from their father, I thought we could recover. It was hopeless. Edinson became a different person and unrecognizable.”

Maria ended up winning their divorce battle in court. The court in the end ordered Cavani to pay her €25,000 monthly which is meant for herself and the kids.

Edinson Cavani – Moving on after Divorce:

After the divorce was finalized by mid of 2013, the whole attention was on Ventrone, the lady behind their marital dissolution.

At some point, it was even rumoured that Cavani was ready to formalize his relationship with his former mistress. Things didn’t go that way though. No such thing happened and things ended between them.

Edinson Cavani moved on and entered a fresh relationship with beautiful Jocelyn Burgardt.

Jocelyn Burgardt is a stunning, curvy model and Samba dancer from Uruguay. She has a  degree in Cultural Management.

She is a media sensation in both Italy to Uruguay. Sadly there isn’t much information about this magnificent creature, born and raised in Bella Union, Artiga, Uruguay.

We are still digging. He takes her everywhere including the pitch of play to celebrate wonderful moments with his club, fans, and teammates.

The Edinson Cavani Love Story is always a focus of interest for media unlike that of Danny Drink Water and Ousmane Dembele whose relationship life is still widely unknown as at the time of writing.

First thing first, he has this very humble personality. A man who gave up the number 7 shirt for CR7. Also, someone who advised a fellow brother, Rodrigo Bentancur, to join Spurs, even though he was a rival with Man United.

Sharpshooter Edinson Cavani loves hunting as a hobby. Thou it has always been football first, then hunting for Edi. He loves it, and he’s a good shot at both.

He has engaged in shooting trips severally with his dad in northern Uruguay. His hunting spree of wild boars and bush pigs did in the dead hours of night amid the hillside woods of north Uruguay.

Below is Mr Luis Cavani handling a.243 calibre rifle which he had just used for his nocturnal hunting session with his son, killing two boars, six hares, and, apparently, some protected creature we are not allowed to reveal in this blog.

According to his father, 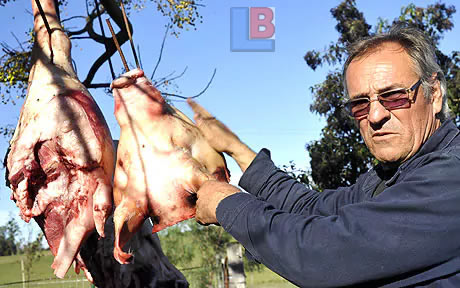 “We always did it when Edinson was a kid and we still do. We both love to spend time fishing and hunting.

Afterwards, we get only three hours of sleep at night. Edi’s never going to stop hunting in the woods!

As for fishing, he always says it calms him. This has always been a way of life for us, We love to pack our latest kills packed on sticks. Edison loves pig heads”… says Luis.

The Legend is a devoted Evangelical Christian. He has been associated with Catholicism throughout his whole life. His Christian faith is proved below.

In the pic below, Edi was videoed praying with a member of the coaching staff. This was at the end of the 2011 Copa America football tournament final against Paraguay held at the Monumental stadium in Buenos Aires on July 24, 2011.

His faith saw him through, and Uruguay won their match.

Like Batistuta, Cavani also wore his hair past his ears. Indeed, he has tried and succeeded in possessing every aspect of Batistuta’s look and style.

Cavani’s love of Batistuta made him follow the Italian league that Gabriel Batistuta played for in his first spell in Europe.

More so, it is based on the fact that as a kid, Cavani’s grandparents were said to have emigrated to Marinello which is a few kilometers from Florence where Batistuta’s Fiorentina is located.

His grandparents would most times go watch the legend play at Florentina. This is what instigated Cavani’s dream of following in Batistuta’s footsteps. Both have the same goal celebration as displayed below.

The player is referred to as “El Matador”. The nickname denotes that of a lead striker who is always capable of taking the bull by the horns, every time he steps out on the playing field! 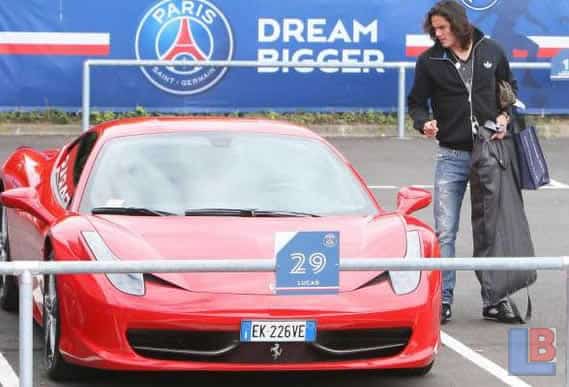 His Ferrari 458 Italia is estimated to be more than 200,000 euros. The car has a top speed of 325 km/h. Edinson is not in the box of the many footballers arrested for speeding.