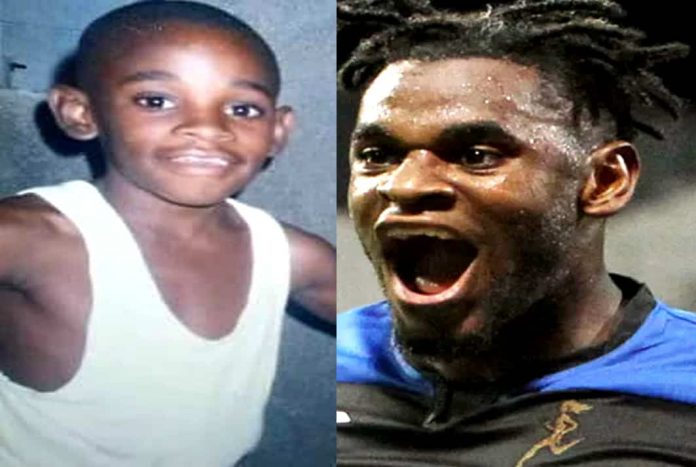 In the nutshell, this is a story of Duván Esteban Zapata’s footballer journey, from his childhood days, to when he became successful. To whet your autobiography appetite, here is his childhood to adult gallery — a perfect summary of Duvan Zapata’s Bio.

Yes, everyone knows Zapata for his speed, physicality and his great eye for scoring goals. However, only a few consider our version of Duvan Zapata’s Biography which is quite interesting. Now without further ado, let’s begin.

For Biography starters, he bears the nickname “The Big Panther“. Duván Esteban Zapata Banguero was born on the 1st day of April 1991 at Rafael Uribe Uribe clinic in Cali, Colombia.

The Colombian footballer is the second of two children born to his mother, Late Elfa Cely Banguero and to his father, Luis Oliver Zapata. Below is a rare photo of Duvan Zapata’s lovely parents.

Duvan Zapata’s Family Background: Did you know that the football magician is a Columbian national of mixed ethnicity with Afro-American family origins? In fact, Duvan Zapata’s parents raised him at the Córdoba neighbourhood of Aguablanca district, in Cali where he grew up alongside his older sister Cindy Carolina.

Duvan Zapata’s Early Life: Growing up at Córdoba, young Duvan began playing football on the narrow pedestrian street of Cali where his house was located. While the then youngster was at it, he dreamt of becoming a famous football player, not for the fame or amazing riches but to be able to afford a PlayStation!

By the time Duván was aged 11, his football talent had already become crystal clear to his parents who deemed it fit that his conventional schooling at Liceo Superior del Valle in Ciudad Córdoba should go hand in hand with a professional career buildup in football.

Thus, a 6th-grade Duván after seeking the consent of his parents was allowed to enroll in the boyhood levels of local club América de Cali in 2002. While at the local club, Duvan grew in strength, skillset and height such that he was already standing tall at 1.86m when he was aged 16 in the year 2007.

It was at América de Cali that Duvan rose through the ranks,  turned professional and even scored on his pro debut to the delight of his coach – Diego Umaña – who had earlier given him a chance to train with the club’s senior squad. Duván played for América de Cali for two more seasons (2009/2010 & 2010/2011) before he was loaned to Argentine side – Estudiantes where he also scored on his debut.

The football prodigy went on to record a tremendous increase in goals tally despite occasionally making appearances with the club’s reserve team. As such, Estudiantes purchased half of his playing rights from América de Cali just before he started attracting interests from top-flight European clubs including West Ham which was close to signing him but gave up because they could not obtain a work permit for him. The joy of Duvan Zapata’s family knew no bounds at the time Italian club, Napoli helped him secure an Italian visa to come play for them.

Duvan who was eventually bought by Italian Side Napoli, didn’t receive a decent chance to prove himself despite being one of the club’s most expensive signings at the time. In fact, Napoli’s then-coach Rafa Benitez often remarked that Duvan was important to the club but the striker’s lack of playtime proved the contrary.

Thus, it wasn’t surprising that Napoli loaned Duvan to Udinese where he suffered an unstable form due to injury. Neither was Duvan impressive on loan at Sampdoria where he was still far from fulfilling his potential. In fact, Duvan received a call to Colombia’s preliminary squad for 2018 World Cup but didn’t make the cut to the final roster for obvious reasons.

Like a phoenix that rises from its ashes, Duvan began exhibiting his full potential at Atlanta, a club that he was sold to by Sampdoria after the Italian side decided that he was no longer needed.

With Goals after goals, Duvan established himself as the top scorer of the Serie A league jointly with Cristiano Ronaldo on his debut season! He even helped Atalanta reach the 2019 Coppa Italia Final and achieve a third-place finish in Serie A. The rest, as they say, is history.

Moving on to Duvan Zapata’s family life, he is married to his girlfriend turned wife – Nana Montaño and has a lot of good things going on for him in his marital life. The couples met as far back in 2012 at Cali when Duvan was playing for Argentine side Estudiantes. Nana was a university student studying Psychology at the time. They dated for a few years afterwards and took their relationship to the next level by getting married years later.

Nana was a woman who knew perfectly how to keep her man! As such, there are no records of Duvan having other girlfriends during the period when he dated the woman that would become his wife. The couples are parents to two lovely children at the time of writing this bio. They include Dantzel (a daughter) and Dayton (a son).

Who is Duvan Zapata without family and what would he have become if his parent’s and sibling weren’t there for him from the beginning? We bring you facts about Duvan Zapata’s family members starting with his parents.

About Duvan Zapata’s father: Luis Oliver Zapata is the father of the football genius. He was born in Corinth, Columbia and raised at Tetillo. Yes, Zapata was a loving and supportive dad, he strictly raised Duvan to be an obedient and respectful kid and ensured that he balanced academics with playing football. What more? Luis never missed taking Duvan to training during his career buildup. Luis now plays an important role in tasking his only son on the need to be focused and stay humble.

About Duvan Zapata’s mother: Late Elfa Cely Banguero Duvan Zapata’s mom. She was born in Padilla, Columbia and also raised at Tetillo where she met Duvan’s dad. Like her husband Luis, Elfa was instrumental to the rise of her only son. In fact, she is credited for taking an 11-year-old Duvan for tryouts into the boyhood levels of local club América de Cali. Sadly she never lived long enough to enjoy the fruit of her labour as she collapsed and died in June 2010. Although her death was deeply felt by Duvan, he got himself together in less time and made the decision to honour the memory of his mom by staying focused on football.

About Duvan Zapata’s siblings: Do you know that Duvan has no brother but a sister who is his older sibling. The lady identified as Cindy Carolina grew up with Duvan and has always been close to him from his early life to date. It is interesting to note that they both share the same passion for football and keep communication lines open regardless of the fact that they are miles apart.

About Duvan Zapata’s relatives: Away from Duvan Zapata’s immediate life, there isn’t much known about his ancestry and family roots as it relates to his maternal and paternal grandparents. Thanks to one of Duvan Zapata’s parents, he is related to Cristian Zapata who is his cousin. Cristian plays for Serie A side Genoa, not much is known about his uncles and aunts while his nephews, nieces and cousins are yet to be identified at the time of writing this biography.

Duvan Zapata’s status as a prolific striker is complemented – and even made better – by a huge personality which is defined by traits of Aries Zodiac sign. He is humble, energetic, fun-loving, resilient, ambitious and open to revealing facts about his private and personal facts.

Whenever the striker is not training or playing football, he engages a few activities that have been overtime regarded as his interests and hobbies. They include travelling, swimming, playing video games and spending good time with his family and friends.

Regarding how Duvan Zapata’s makes and spends his money, he has an estimated net worth of $1M at the time of writing. The bulk of the striker’s wealth have sources established in the salaries and wages that he receives for playing top-flight football while endorsements contribute a significant chunk to his rising wealth.

As such, the striker affords to live a luxurious lifestyle that fans and foes envy him for. Evidence of Duvan’s good living includes his ability to drive luxurious cars as well as live inexpensive houses and apartments. 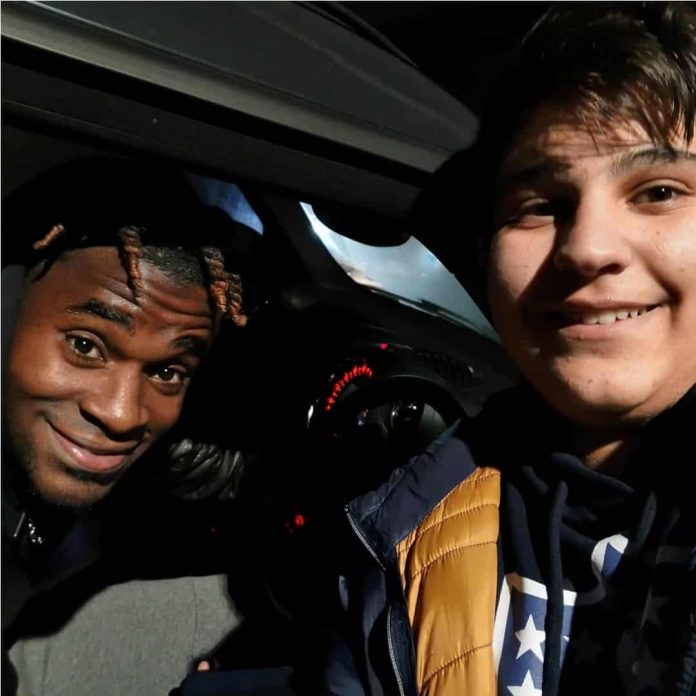 To wrap up our Duvan Zapata childhood story and biography here are little known or untold facts about the striker.

Fact #1: Salary Breakdown: As at the time of writing, the striker’s contract with Atlanta BC sees him earning a whopping salary of €4,680,000 per year. Crunching Duvan Zapata’s salary into deeper numbers, we have the following;

Since you started viewing Duvan Zapata‘s Bio, this is what he has earned.

Did you know?… It will take the average worker in Europe at least 18.5 years to earn the same as The Big Panther earns in 1 month.

Fact #2: Religion: According to reports, it is likely that Davan Zapata’s parents raised him in adherence to the catholic religious faith. Thou, the striker, not big on religion but was once spotted at a catholic church (see below). This development lends credence to the possibility of Duvan being a Christian and a practising catholic.

Fact #3: Duvan Zapata Tattoo Fact: Like Donyell Malen, Samuel Chukwueze, Luis Muriel and Krzysztof Piatek, Duvan Zapata has no body arts at the time of writing neither do fans have tattoos of him yet. He is rather focused on improving his physique, stamina and possibly height for more and effective aerial duels.

Fact #4: Duvan Zapata FIFA rating: Do you know that Duvan Zapata has an overall FIFA rating of 83 at the time of writing. Although his ratings have experienced an astronomical rise in recent times, there is no denying the fact that a rating of 87 would be attractive to FIFA career lovers that desire a near-perfect combo of skillset.

Fact #5: Duvan Zapata Pets: There are numerous strikers who have a thing for pets particularly dogs and Duvan Zapata is one of them! In fact, his dog is like an addition to his immediate family as evident in the manner which he gets it featured in family photos.

Fact #6: Duvan Zapata Smoking and Drinking Fact: Duvan Zapata is not given to taking hard drinks, neither has he been spotted smoking at the time of writing. With such a healthy habit, Duvan joins the league of football players who have not lost sight of the need to live and stay healthy.

In this final section of Duvan Zapata Biography Facts, you’ll get to see our Wiki knowledge base. Showcased below, it helps you find information about the striker in a concise and easy way.

FACT CHECK: Thanks for reading our Duvan Zapata Childhood Story Plus Untold Biography Facts. At LifeBogger, we strive for accuracy and fairness. If you find something that doesn’t look right, please share it with us by commenting below. We’ll always value and respect your ideas.