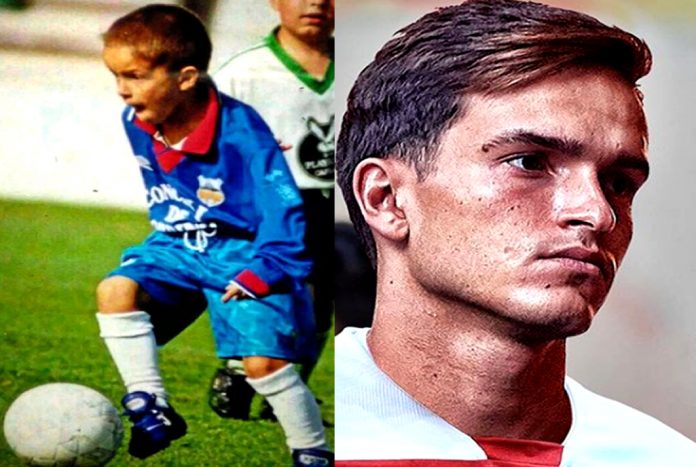 LB presents the Full Story of a Football Genius who is best known by the nickname “Filipo“. Our Denis Suarez Childhood Story plus Untold Biography Facts bring to you a full account of notable events from his childhood time to date. The analysis involves his early life, family background, life story before fame, rise to fame story, relationship and personal life etc.

Yes, everyone knows he bears a similar surname with Uruguayan star Luis Suarez. However, only a few consider Denis Suarez’s Biography which is quite interesting. Now without further ado, let’s Begin.

Starting off, his full names are Denis Suárez Fernández. Denis Suarez as he is often called was born on the 6th day of January 1994 to his parents in Salceda de Caselas, Spain.

Denis was born into a middle-class family background. His mother was a professional hairdresser while his dad was a businessman who wasn’t much around when little Denis was a child. Below is a photo of Denis Suarez’s parents. His mum’s shiny hair speaks very much of her profession. 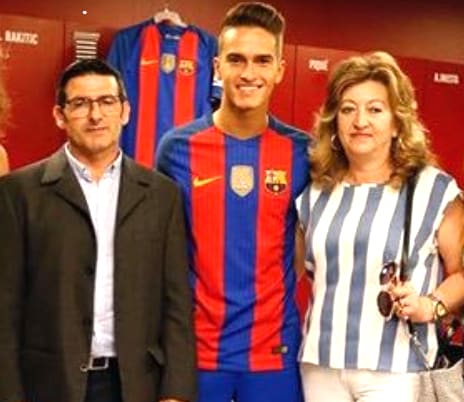 Denis Suarez’s family has their origin from the Galicia ethnic group of Spain. As seen from the map below, this ethnic group covers most of the boundary of Northern Portugal. 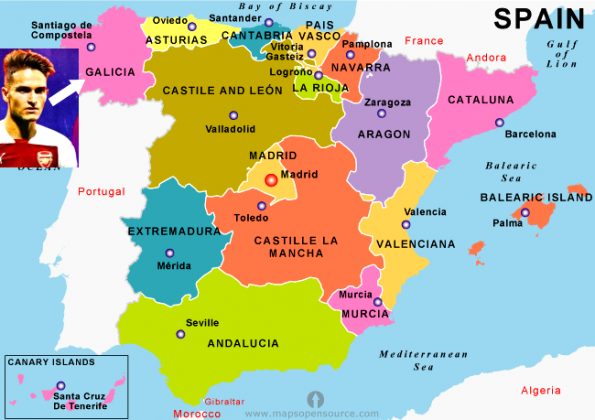 Denis didn’t grow up as the only child of his parents. He grew up alongside his sister pictured alongside their mother. In case you are wondering who the other lady is, well… it’s his ex-girlfriend. 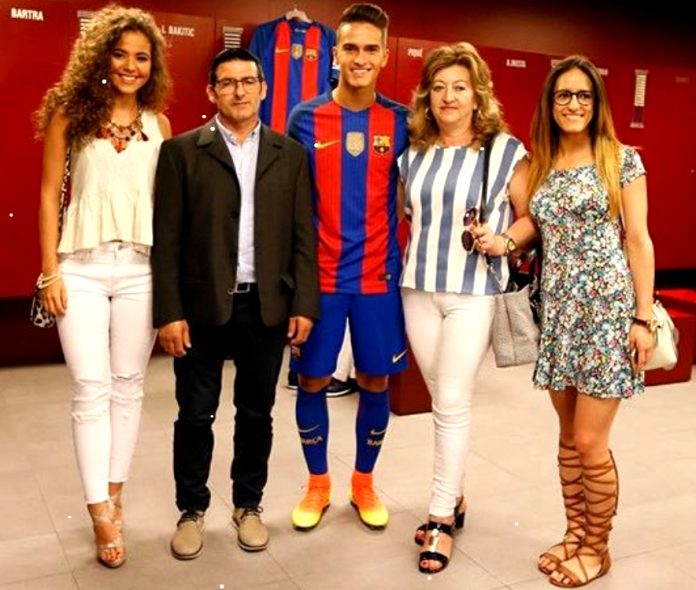 Little Denis Suarez began to play football as three years old toddler. Back then, would mold and convert his balloons, oranges into a soccer ball and then, go on to kick it day and night. Often times, little Denis would go on a rampage with his kicks which resulted in him breaking chandeliers, vases and most importantly destroying plants outside his mother’s Salon (Mirror Report).

In the absence of his away dad and seeing his mum having enough of him, Little Denis was eventually forced to join a team in other to stop him from further ruining the plants outside his mum’s salon.

Denis Suarez’s mum left her hairdressing salon in the hand of relatives to hold fort in her absence. This happened while she and her son Denis traveled a 90-minute journey to Porriño Industrial Football team in other to enroll her son for trials.

Lucky Denis Suarez passed the trials and his mum continued to make the sacrifice of traveling with him to training while her husband stayed at work all day. While at Porriño Industrial, little Denis was regarded as the best player among his age group. 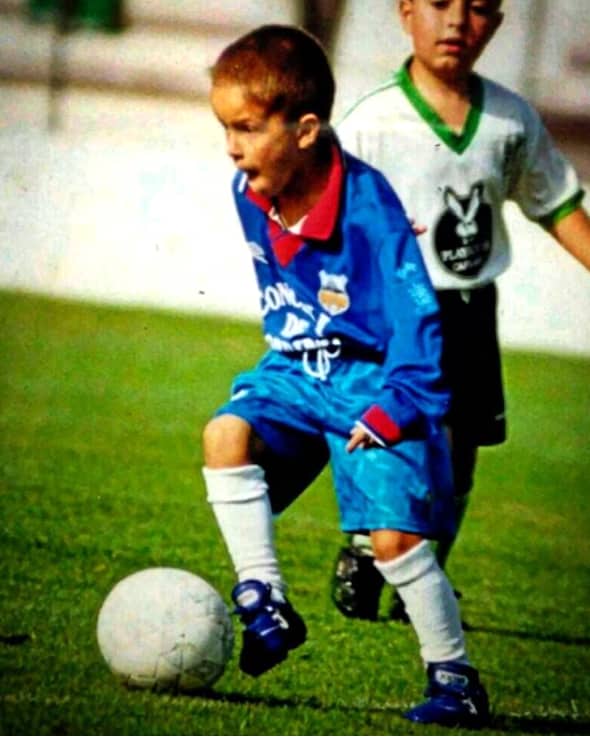 As years passed, Denis was able to fend for himself without relying on his mum. He later continued his footballing maturation process after a successful trial with Celta Vigo in 2009. 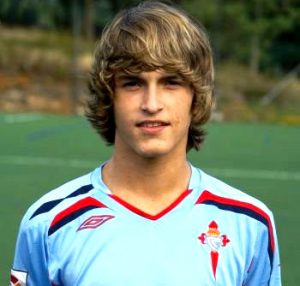 Manchester City during the time of their revamp went out in search for Europe’s most promising players for both their senior and junior team. Scouting in Spain, the club saw a genius in Denis Suarez who was at the top of his youth career in Celta. 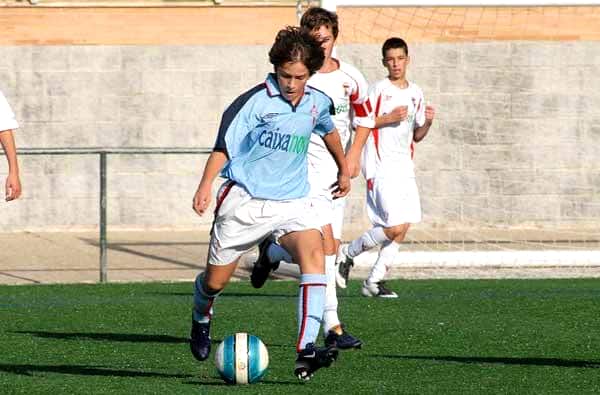 Denis Suarez was then plucked from Spain to England. At the age of 17, young Denis just like Brahim Diaz saw himself being exposed to a new English culture, training method and habit. On 21 September 2016, Díaz made his first-team debut for City which he performed to the amazement of crowds. 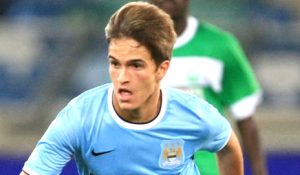 This feat earned him a professional contract five days later. Also at that time, Denis became a subject of intense transfer. Denis Suarez ended up winning the Young Player of the Year Award in 2012. He also boosted his credential by winning the memorable 2012 European Championship with his Spanish U19 teammates. 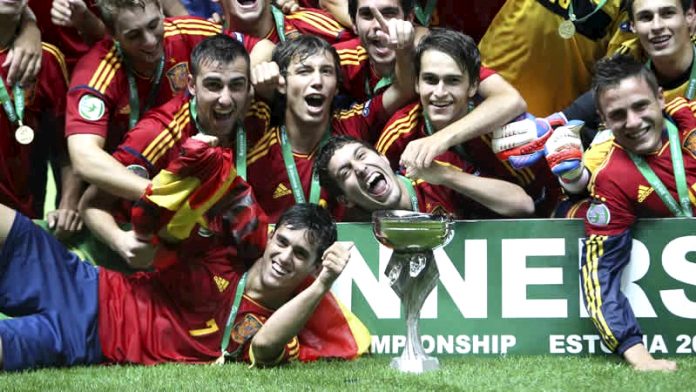 After a professional contract, Denis Suarez was assured of becoming part of the first team. As time passed, he became saddened to see himself lacking senior games. To worsen it, he was being taken to the club’s youth team. Shockingly, even at the Man City’s youth team, Denis was still denied. Speaking about the painful incident, Denis once said…

“The youth team had an English boss who liked the long ball. When I arrived, small as I am, he must have thought ‘where has this kid come from?’ and obviously, I didn’t play.'”

One sad day, after missing another game for the youth team, a frustrated Denis Suarez went to see Man City’s Football Administration Officer Marwood telling him…: ‘look, tomorrow I’m taking a flight back home because I’m not playing and I don’t wanna be here anymore.” Mirror Reports;

Even a Man City’s Spanish scout tried convincing Denis to stay but he wouldn’t listen and decided to leave the club the next day as earlier warned. Denis Suarez was accepted by Barcelona B team.

Denis Suarez after a season with Baca’s B team accepted a loan to Sevilla where he encountered Unai Emery, whom he became very close with. Unai Emery guided Denis Suarez together with his teammates into a Europa League title victory. 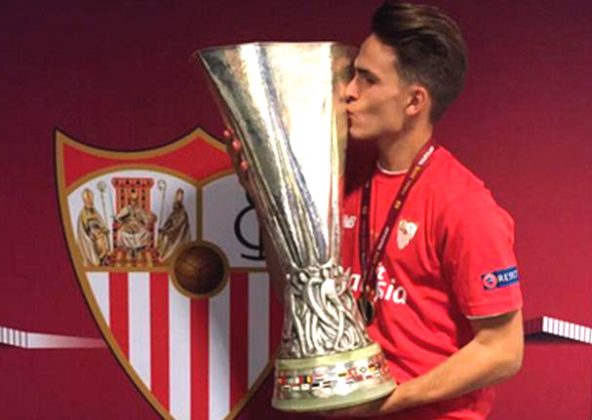 Denis after winning the Europa League with his teammates finally showing what he could deliver on the big stage. This feat earned Denis a move to Villarreal where he was part of the team with a fourth-place La Liga finish. Following such performance, FC Barcelona finally retained the man they’ve set on a successful loan.

As at the time of writing, Suarez is attracted to working with Unai Emery again. The rest, as they say, is history.

Behind every great man, there’s a woman, so does the saying goes. In this case, behind almost every successful Spanish footballer, there’s indeed a glamorous wag. The is seen in the beautiful person of Nadia Aviles who was 21 (4 years younger than her man) as at the time of writing. 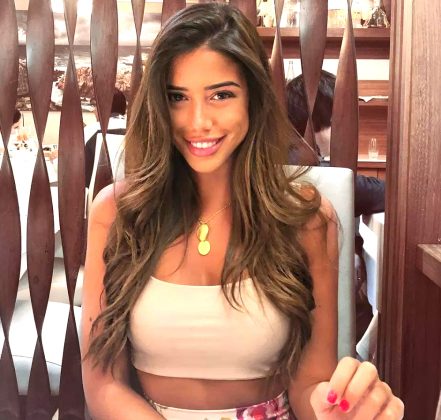 Nadia was born and raised in Barcelona. She began dating Danis Suarez just after he broke up with his long-term girlfriend Sandra Montoto who appeared in the earlier photo of Denis Suarez parents. 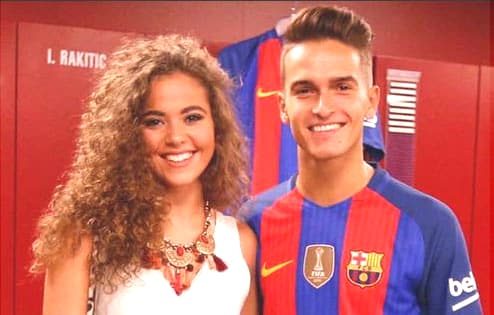 It appeared Denis’ relationship Sandra Montoto led to the birth of his son whose name is Lucas. 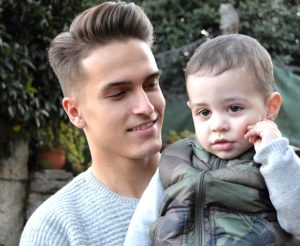 Beautiful Nadia is a model, event stewardess and influencer by profession. She boasts more than 125,000 followers on Instagram who are mostly attracted to her lip surgery (Cautro Report).

Nadia and Denis don’t get shy of appearing very loved up in their social media posts. It’s only a matter of time before a marriage proposal comes. 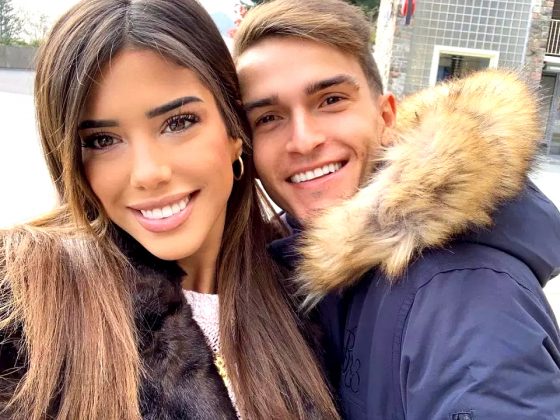 Did you Know?… Denis Suarez isn’t her first footballer boyfriend. Rumors exist that Nadia once dated Enzo Zidane- son of Zinedine Zidane in 2017. As at the time of writing, she is dedicated to supporting her boyfriend’s career. 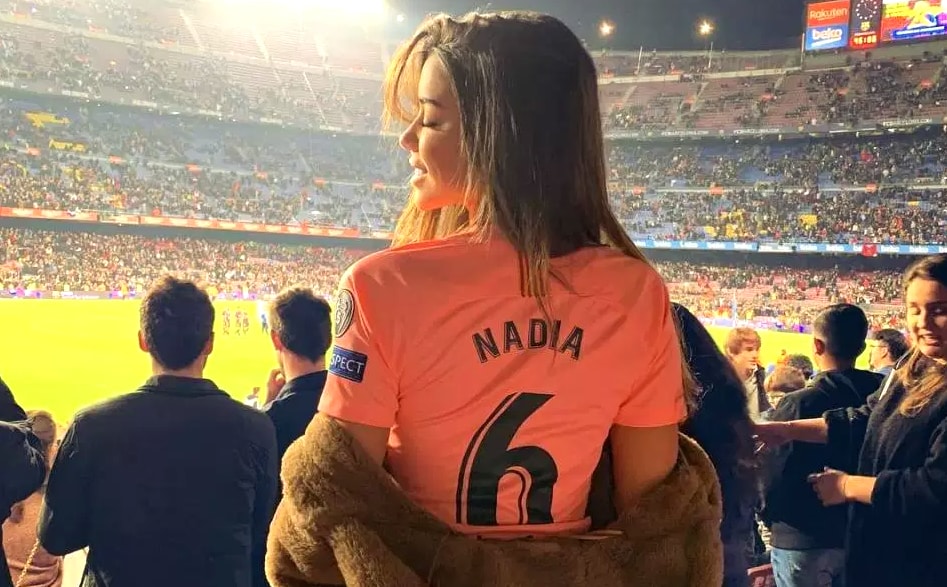 Getting to know Denis Suarez Personal life facts would assist in getting a complete picture of him. 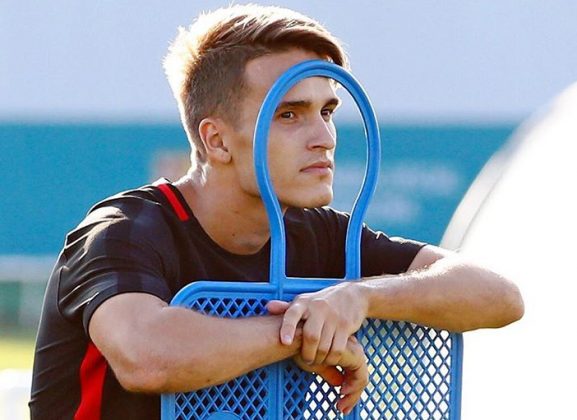 Denis is someone who hardly gets upset and one who constantly adapts to what other people want from him. This is why his close friends at Barca B gave him the nickname; “Filipo“. This nickname reflects his reluctance to do anything with an egocentric feeling.

Asides being with his girlfriend and family, only playing football fulfills him. He loves seafood, orange juice, turkey sandwich, banana BUT distaste apple pie. He does not forgive infidelity in his relationships and would prefer being a policeman or tennis star if he had not ventured into soccer. Denis is a big fan of tennis and his sporting idol is Rafael Nadal.

Denis Suarez isn’t the type of footballer who lives the Lavish Lifestyle which is easily noticeable by a handful of pretty impressing cars. Although he was once benefited an Audi car from FC Barcelona’s sponsor Audi. 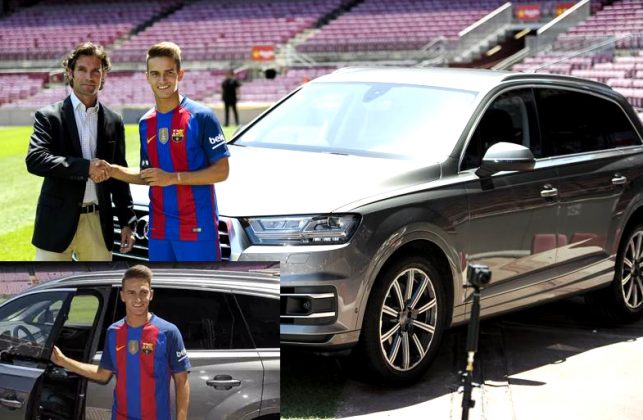 In the picture above, Suarez looked reasonably happy as he got the keys to his new Audi RS 6 Avant Performance model.

FACT CHECK: Thanks for reading our Denis Suarez Childhood Story plus Untold Biography Facts. At LifeBogger, we strive for accuracy and fairness. If you find something that doesn’t look right, please share with us by commenting below. We’ll always value and respect your ideas.