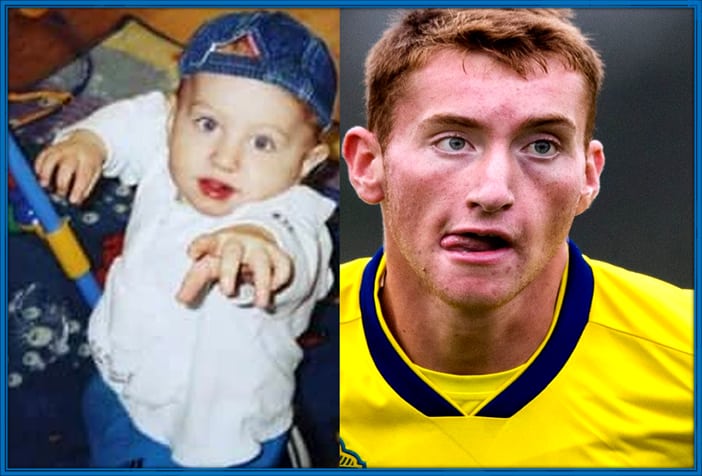 Our Biography of Dejan Kulusevski tells you Facts about his Childhood Story, Early Life, Parents, Family, Girlfriend/Wife to be, Lifestyle, Net Worth and Personal Life.

In a nutshell, we present you with a complete Life Story of the Swedish Footballer — from his early days to when he became famous.

To whet your appetite, take a look at his beginnings to fame — a clear summary of Dejan Kulusevski’s Bio.

Thanks to his multi-faceted ability, many fans have compared him to Sweden’s most revered icon, Zlatan Ibrahimovic. Even the media does label Dejan Kulusevski as the new boss of Blågult.

As his meteoric rise continues to flood the world of soccer, we realize only a few fans know the story behind his name. Without further ado, let’s begin.

For Biography Starters, he bears the nickname “Shady”. Dejan Kulusevski was born on the 25th day of April 2000 to Macedonian parents in Vallingby, Sweden.

The versatile Footballer is the youngest of two children in his family. Behold his beautiful mum (in her 40s) and cool looking Dad (in his 50s). 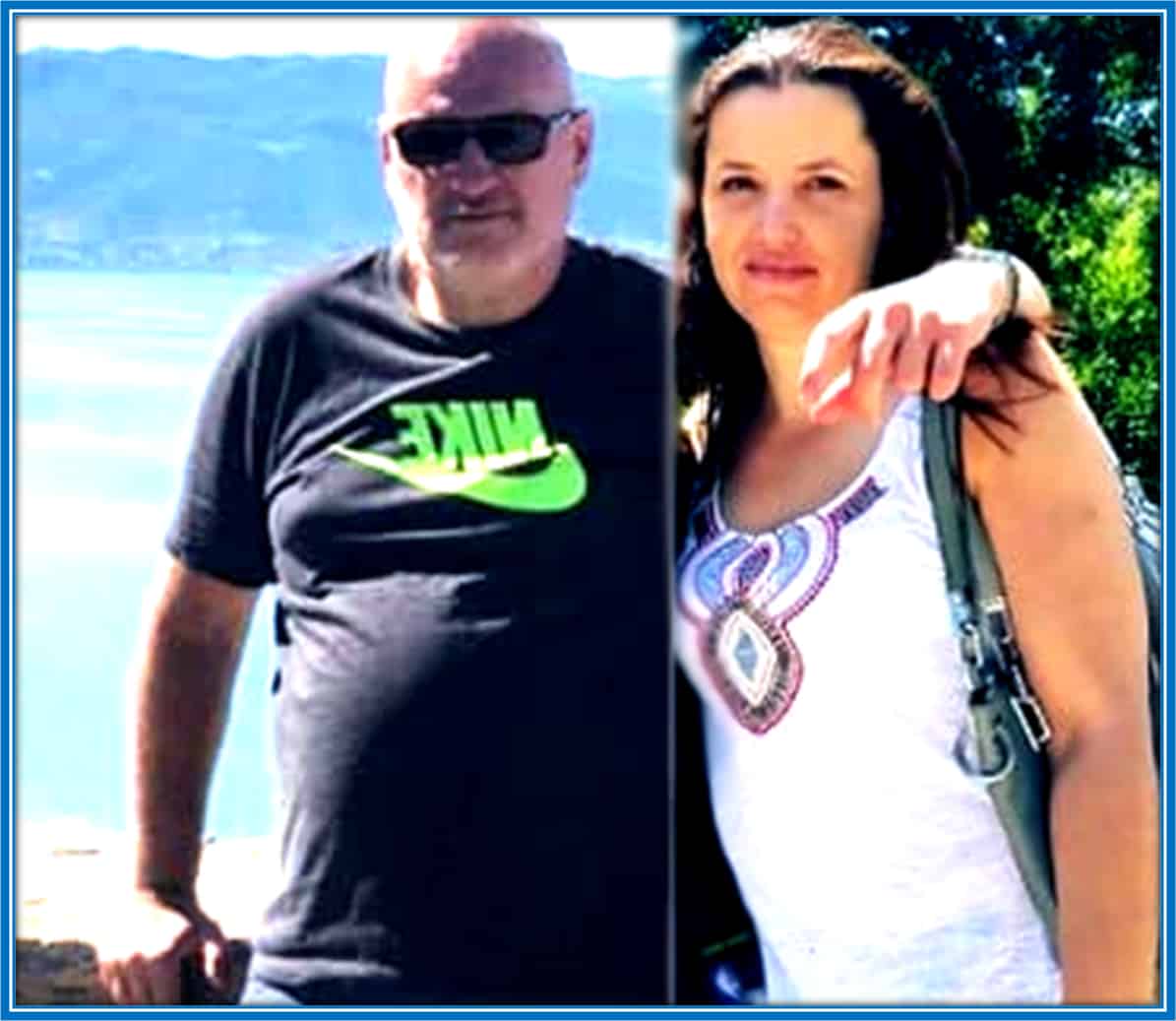 Despite being given birth to in Sweden, he grew up knowing different languages, including that of his motherland.

As the last child (the baby of the house), Dejan Kulusevski’s parents and big sister (Sandra) always made him have his way as personal needs come at his beck and call.

The Speed dribbler is from a rich Stockholm — the Swedish capital situated on 14 islands and connected by 57 bridges.

Dejan Kulusevski’s parents were the affluent type who were able to afford him the newest collections of toys including a football. The happy kid isn’t among those with a rag to rich story.

Let’s get things right; he has Macedonian roots despite Sweden being his birthplace. Both of Dejan Kulusevski’s parents are Macedonians who decided to have their son in Sweden. The Footballer grew up becoming a Polyglot thanks to the diverse ancestry.

Research shows he is fluent in five languages — that for his birth country, Slavic, Italian, English and German.

Thou wearing the black and yellow national colours, he holds the Balkan country (Macedonia) very deep in his heart.

The youngster first gained the motivation of loving football through his sister, Sandra. Interestingly, she was a fan of Ronaldinho and even had the Brazilian’s wallpaper on the wall of her room.

Back then, Sandra would tag along with her little brother to the field, watching him practice street soccer while she cheers.

Sandra’s support from the side-lines gave the six years old a reason to focus on surpassing other kids.

To get things done formally, Dejan Kulusevski’s parents approved their son having an enrolment with Macedonia’s IF Brommapojkarna youth academy in 2006. 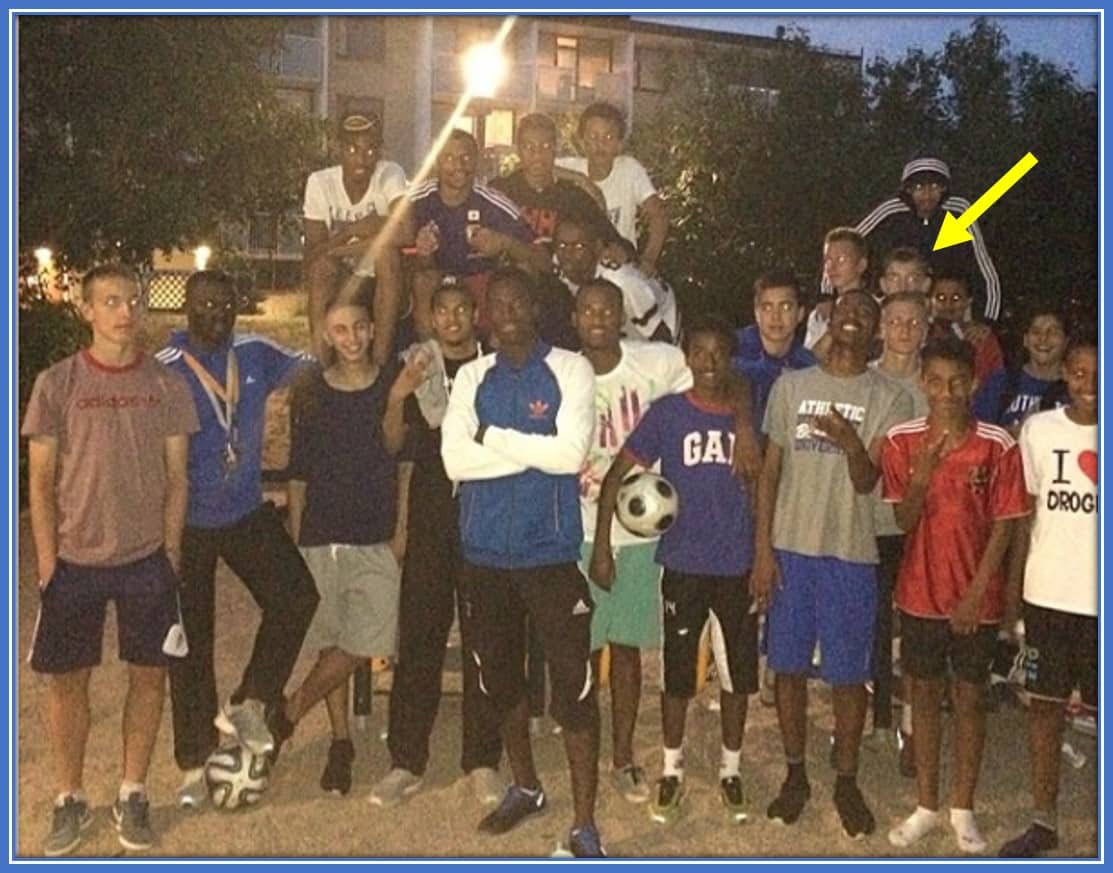 Sadly, his early days in the academy got mired with silence. Meaning, nobody appreciated his natural abilities except a few teammates and family.

Notwithstanding, he kept a clear and positive mind with the aim of excelling to a level where his skills do the talking. He once said as he grew older;

“Nothing is impossible. The impossible just takes a longer time. Everything you ever want, you can have. All you’ve got to do is to believe in yourself.”

With the support of his parents and sister, he went through ten years of youth training in Macedonia.

Thankfully, the doors to success opened as 15-year-old Kulusevski in 2015 received a call to join the Macedonian U-17 national squad.

Five matches with Macedonia was enough to convince Sweden that he was the person they have been looking for.

Hence, they gave Dejan a more favourable offer which had him leave the country of his parent’s birth for Sweden.

The news of his international call made his father proud and his mother undoubtedly happy. From the club side, the joy of his family knew no bounds as the youngster scaled through trials from Atalanta. 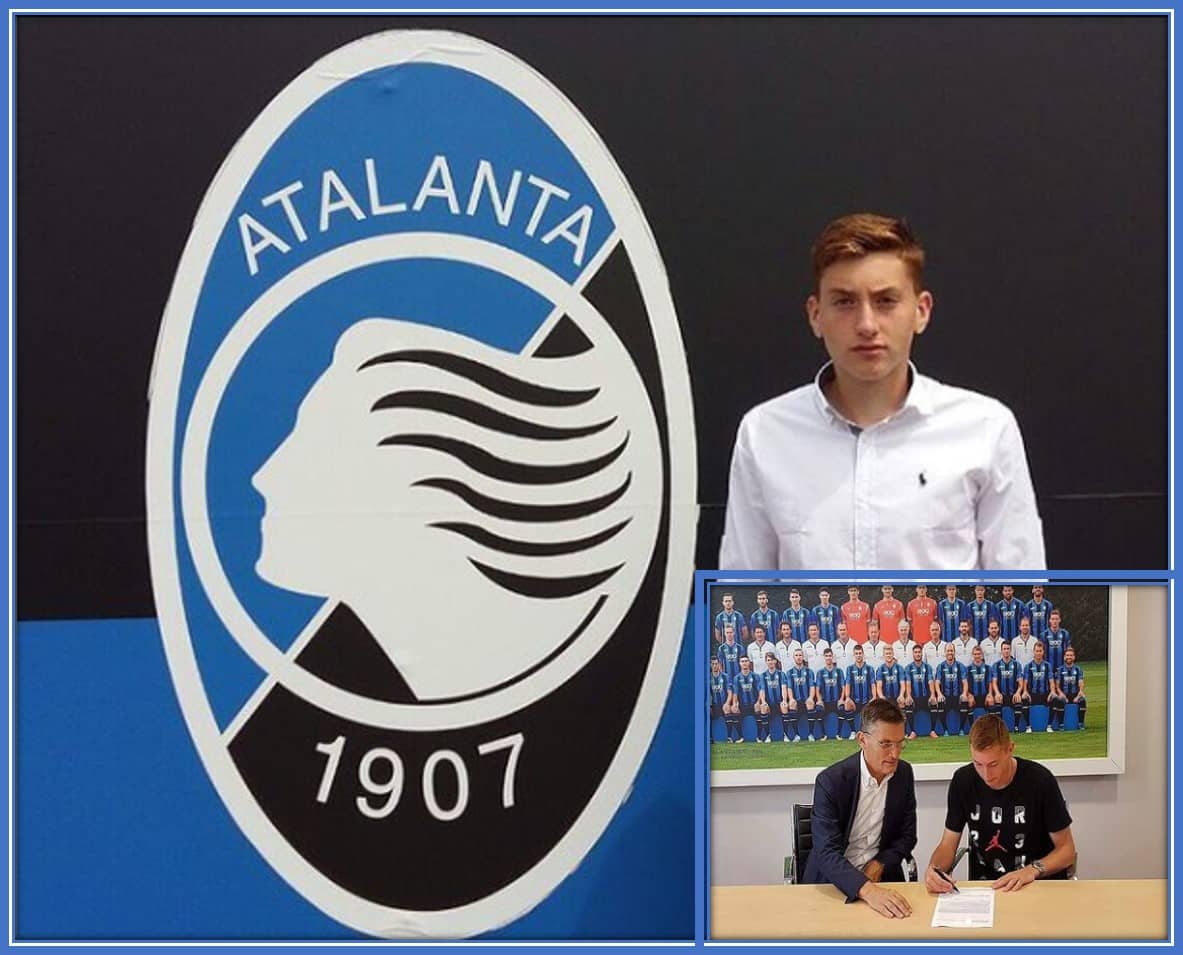 In no distant time, he began defying big odds stacked up against him. As destiny would have it, the next-big-star got blessed with acceleration, speed, stamina. This feat made the media to label him the New Zlatan.

As he continued to advance his endeavours, so also did he record massive success for his birth nation. In 2019, Kulusevski joined Sweden’s national team.

In just a few appearances, he earned himself an award of excellence. 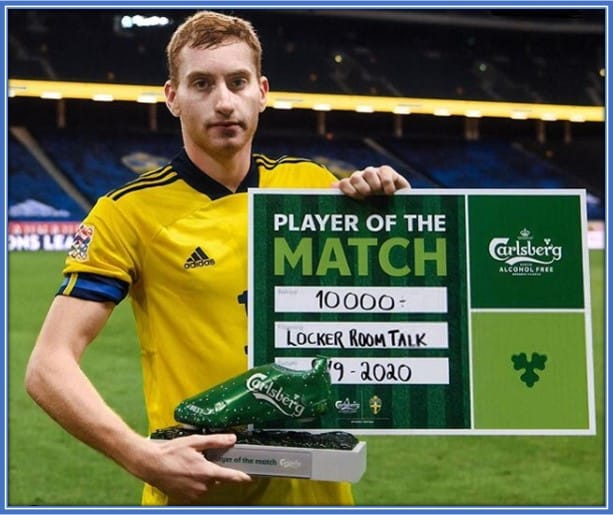 As at November 2020, he ranks among the Ten most expensive players born in 2000 or earlier by market value.

It’s only a matter of time before he becomes a global household name. As I update Dejan Kulusevski’s Biography, he alongside Rodrigo Bentancur have become fans favourite under Antonio Conte‘s Spurs. The rest, as they say, is history.

Who is Dejan Kulusevski Girlfriend and Wife to be?

The Speedster has got a distinct taste in his relationship life as compared to Freddie Ljungberg, who dated eight different ladies in the space of eight years. He has deemed it fit to stick to his one and only girlfriend who is seen here. 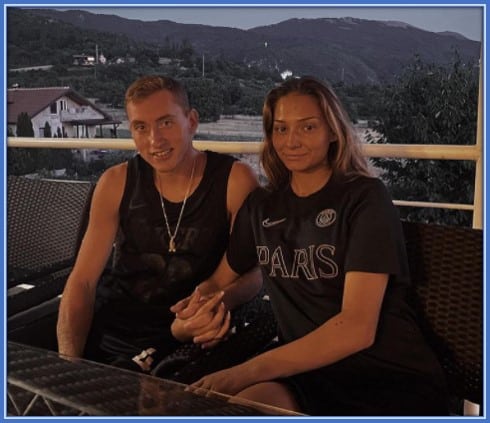 No doubts, the love-birds are likely to take their relationship to the next level of becoming husband and wife. We hope their love story never dies and that they end up tying the knot.

Kulusevski has got a unique trait that makes him value honesty above everything else. He does not shy away from hard work and finds comfort in being steadfast.

Juventus midfielder loves to spend some time-out with his friends at the pool. From his parents’ home country, there are lots of kids who love his celebration style and sees Dejan as a big brother whose footsteps is worth following.

Of course, it is no longer news that he earns a considerable amount of money at Juventus. We’ve analyzed his spending pattern and discovered that he lives an average lifestyle that suits his wealth.

The amiable winger has not seen the need to deny himself the pleasure he can afford. We’ve seen him spending his vacation days on the seaside cruising a yacht.

The truth is, he lives a life which is on a different level from his fellow countryman — Alexander Isak. 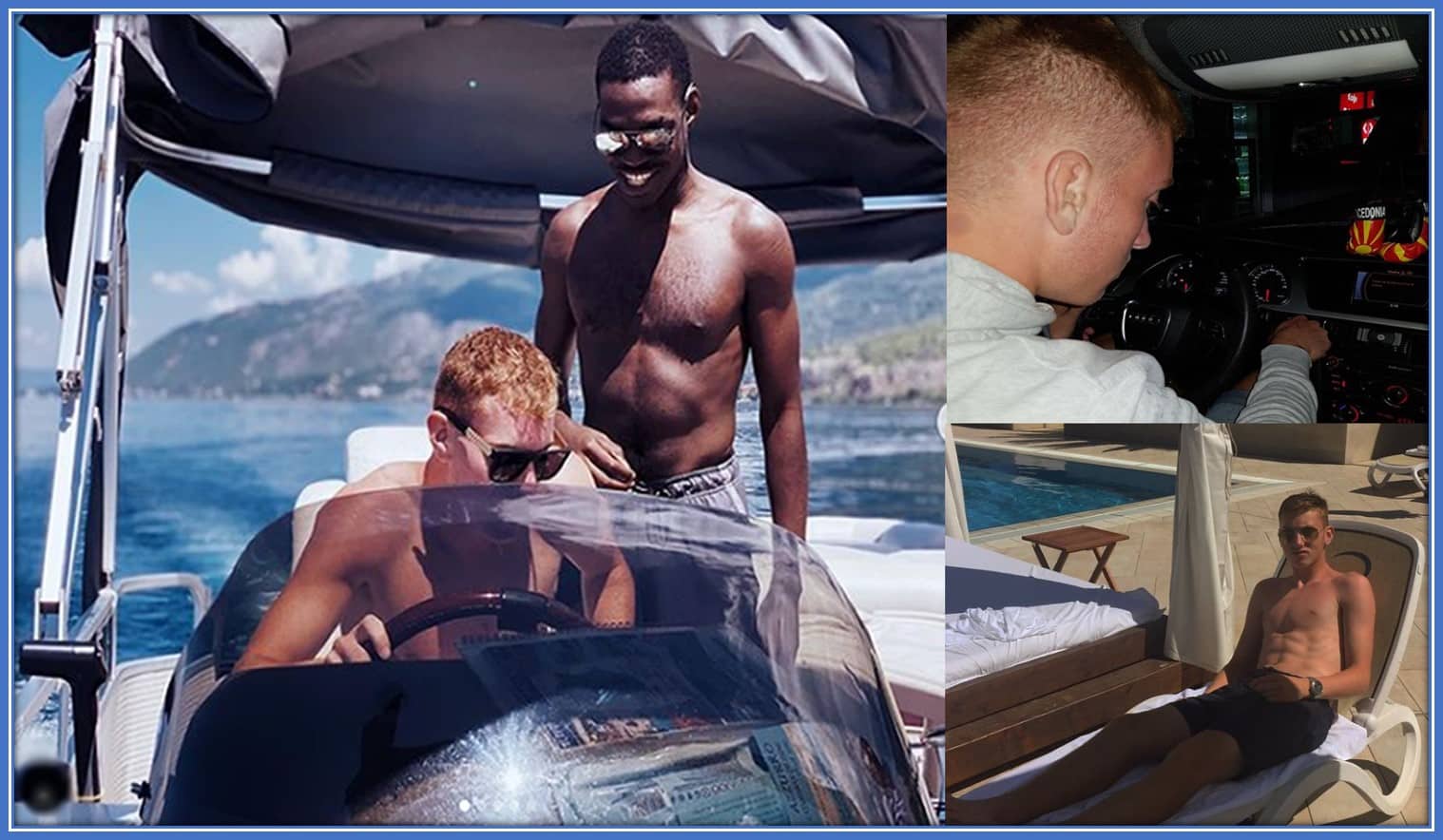 The Juventus star pockets an annual salary of €2,002,997 at Juventus and has a Net Worth of approximately €1.5 million.

Some people don’t just define their relationship with him only by what he does on the pitch. These people are his mum, sister and Dad.

In this section, we present you with facts about Dejan Kulusevski’s family, starting with the head of his home. 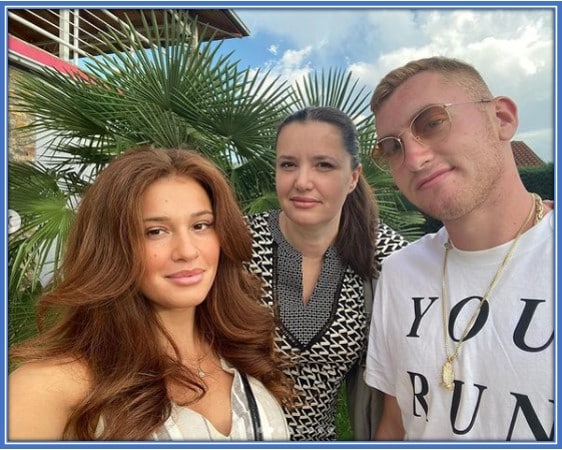 Words can not explain the Dad-son bond that exists between him and his daddy. Aside from fulfilling his paternal responsibility, Kulusevski’s father often checks upon him at his training camp even after he joined Juventus. 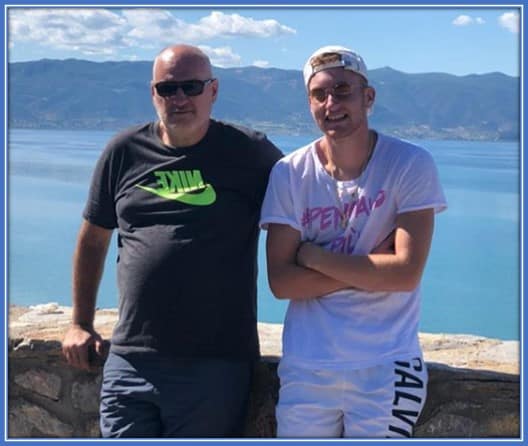 Unfortunately, upon embarking on one of his many visits in October 2020, his Kulusevski’s dad was caught up in an accident. Thankfully, he came out of his overturned jeep unhurt from the scary ordeal.

The Footballer is quite fond of spending time with his mother that you could regard him as mommy’s boy.

As the last born, it is natural to know that he finds consolation from his mother whenever his challenges grow bigger. 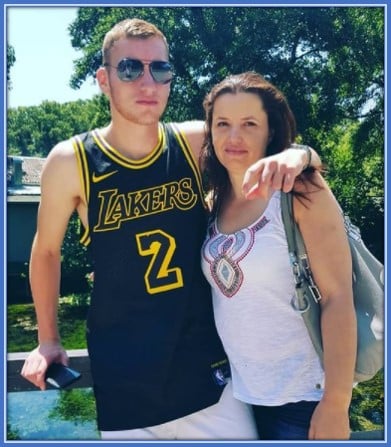 The right-winger has no brother but only one sister whom he cherishes. Just like the Hen protects her Chicks, so did his elder sister watch over him.

Sandra is beautiful and was once overprotective of her little brother right from their childhood days. 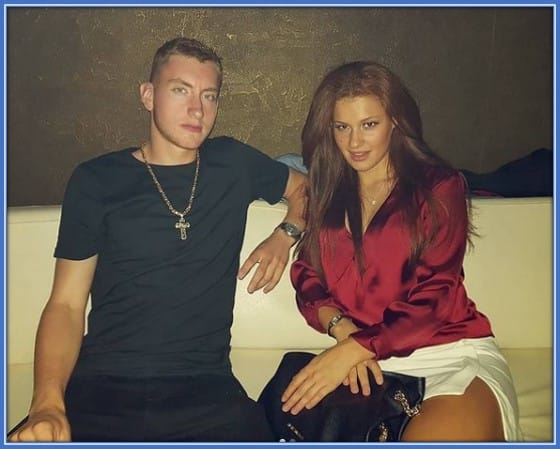 There has been no information about his grandmother and grandfather. Also, it seems like Kulusevski doesn’t have any nephews or nieces at the time of writing this Life Story. Notwithstanding, we are sure his uncles and aunts are proud of his achievements.

To round up the Life Story of the Winger, here are few truths that would help you get a full grasp of his Bio.

The average citizen from Sweden who earns €52,919 a year would need to work for 37.8 years to make his yearly salary. Here is a breakdown of his earnings.

Since you started viewing Dejan Kulusevski‘s Bio, this is what he has earned.

Like many colleagues in his trade, Kulusevski has got quite an interest in dogs. No wonder he is fond of snapping with his family dog called Nala.

The cute little creature often sticks around Kulusevski whenever he visits his family home. 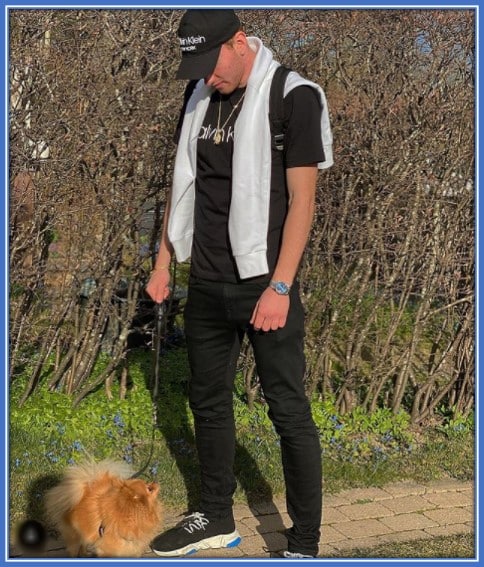 He may not look it, but the amiable ball-kicker has a profound love for his Christian faith.

Do you know that he once dressed in Santa clause attire while celebrating Christmas with some kids?

By this, we can conclude that Dejan Kulusevski’s parents did raise him according to the Christian faith. 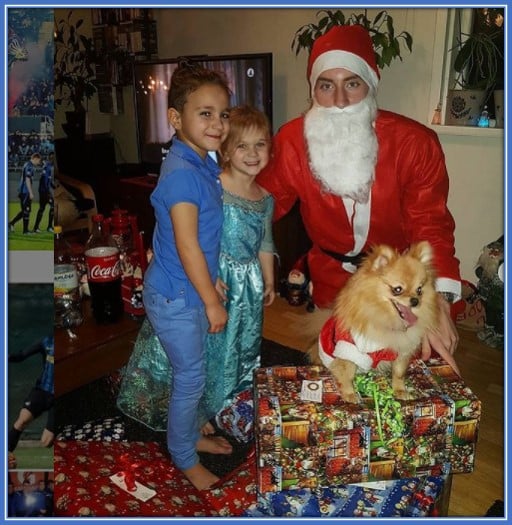 The prolific winger shares a close bond of friendship with Amad Diallo. Interestingly, Kulusevski and Diallo became friends back in the good old days when they both had contracts with Atalanta. 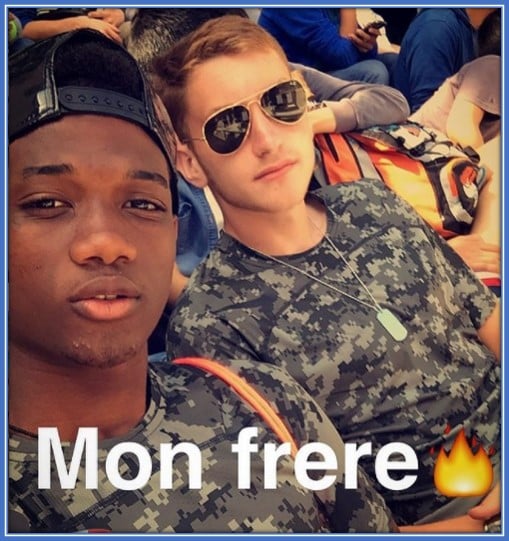 No doubts, with hard work and consistency, the prolific dribbler is likely to fulfil his potentials (rated 88).

Playing alongside legends like C Ronaldo, the midfielder/winger is proud to associate with the best in the industry. 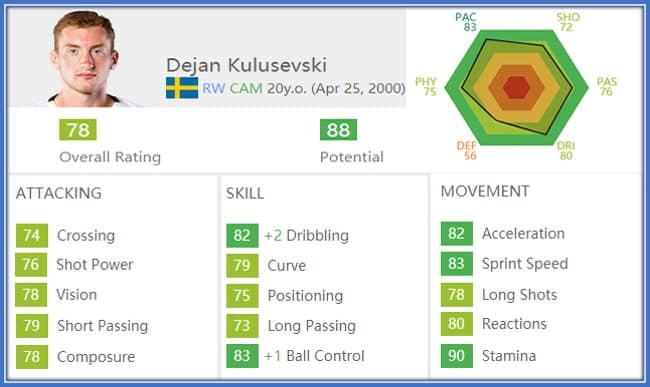 The Biography of Dejan Kulusevski helps us to understand that the act of absolute belief in possibilities is key to success. The Juventus prodigy is also of the opinion that impossibility does contain itself in the dictionary of fools.

From the onset, the parents of Dejan Kulusevski ensure he doesn’t lose sight of his visions. While his father supported him technicality, his mother did the comforting role.

Sandra, his sister, cheered him into a path of success leading to a lifelong bond between the two.

Our team strives for accuracy and fairness while delivering the article Dejan Kulusevski’s Bio. Kindly contact us if you find anything that doesn’t seem right in our content.

Otherwise, let us know in the comment section, what you think about Kulusevski. To get a glance of his Memoir, use the Wiki table.

May 2, 2022
SUSBSCRIBE TO LIFEBOGGER STORIES!