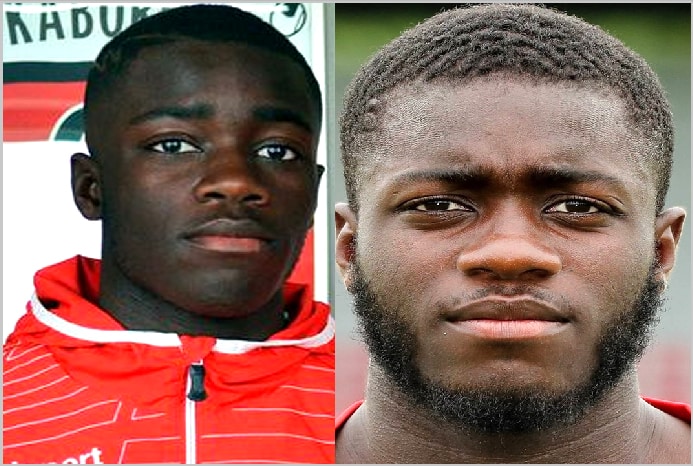 Our Biography of Dayot Upamecano portrays Facts about his Childhood Story, Early Life, Family, Parents, Girlfriend/Wife to be, Lifestyle, Cars, Net Worth and Personal Life.

In simple terms, this is a story of the Footballer’s life journey, from his bulky boyhood days, to when he became famous.

To whet your autobiography appetite, check out his boyhood to adult gallery — a perfect summary of Dayot Upamecano’s Bio.

Yes, you and I know Dayot is a defensive beast, one whom many have considered being the successor of Raphaël Varane.

However, not many football fans have read an in-depth version of Dayot Upamecano’s Biography, which we’ve prepared and is quite interesting. Now, without further ado, let’s begin.

For Biography starters, his full names are Dayotchanculle Oswald Upamecano, and his nickname is “Dayot“.

The defender was born on the 27th day of October 1998 to his parents in Evreux, a commune located in the department of Eure, the region of Normandy, France.

In case you didn’t know, his birth came just three months after the France 1998 world cup. Just after his birth, Dayot Upamecano’s parents decided to give him the name “Dayotchanculle” for a reason.

The name was given to him as a ‘souvenir‘ (SoFoot Reports), and it’s a name his great grandfather bore.

Dayot Upamecano was born as the first son and possibly the second child into a family that is known to be great football lovers.

He spent his early years growing up happily alongside his elder sister and kid brother, whom he sees as his successor.

Judging by his looks, you’ll agree with me that the defender is likely to have his family roots away from France.

As you have probably guessed, Dayot Upamecano’s family have their origin from Africa- precisely Guinea-Bissau.

Guinea-Bissau is a tropical country on West Africa’s Atlantic coast, a country known for its national parks and wildlife. A look at one of Dayot Upamecano’s parents- his cute dad, without doubt, explains his African origin.

Did you know?… Dayot Upamecano’s parents (led by his dad) gave him the name “Dayotchanculle“- which in reality, is an honorary title for the village chief on the island of Jeta Caoi which is his family’s hometown in Guinea-Bissau.

Growing up in the French Évreux neighbourhood was exciting for young Dayot. Early on, he lived and played football (futsal or five-a-side football complex) from morning to night.

He did that with his best friend, who is no other than fellow French footballer- Ousmane Dembele. Speaking about his childhood experience, Dayot once said;

“With Ousmane and others, we played football all the time. We also played futsal.

Early on, We worked on our technique, aggressiveness. We played without limits. And that helped us a lot.”

As a kid, Dayot Upamecano was not the best on the pitch. Because football was a family passion, the young lad was lucky to have his family members as both advisors and helpers.

Dayot Upamecano’s dad, for instance, made him work very hard in order to ensure he got accepted into a decent football academy.

The year 2009 was a great year for kid footballers in his neighbourhood. That year saw a new club academy named “Evreux Football Club 27” beginning operations not so far away from his family home.

Lucky Dayot and his best friend Ousmane Dembélé were among those who first attended and passed trials with the academy.

For Dayot, life at Evreux wasn’t easy at first. Thou he had his feet on the ground from a very young age.

Dayot once claimed that he worked more than others (mostly on solo-mode) while he played there. In his words;

“In Evreux, at the end of training, I still go to kick the ball alone. It worked for me and it was the key to my success.”

While at Valenciennes FC, Dayot Upamecano felt it wasn’t about being the best but having a rage in him in every game. Sometimes he was told to play in the middle, which he did well, even scoring goals.

No matter where the coach put him, he played, with all his strength and maturity. Valenciennes was indeed a very good memory for the rising defender who is pictured with his friend and academy mate.

At the age of 16, in the summer of 2015, the French defender made the most important decision of his life. He left his entire family and country behind for greener pastures abroad.

Dayot Upamecano’s parents approved their son’s decision to go play his football abroad, precisely in Austria. Thanks to his in-built maturity, it was so difficult to leave home at the tender age of fifteen.

Dayot began life abroad with Liefering, an Austrian second division club, before getting called up by Red Bull Salzburg (pictured above). Red Bull Salzburg made him more mature, helping him in many areas, including language. In his words;

“There were many foreigners like me. I had to learn the language. The educators were really great.”

At Red Bull Salzburg, Dayot knew Strength is one of few abilities that are so important in modern football. This made him to the hardcore regime of building his pack of Pack On Muscles.

At the time his much-awaited transfer to German-based RB Leipzig came, the defender had already turned into a FOOTBALL GOLIATH.

One of the characteristics fans cheered him for is the way he stretched out his long bulky legs to steal the ball. More so, his 6feet- 1inches height of muscles is, without doubt, an obstacle that can hardly be overcome by any opponent.

As observed below, the Rocky Defender is able to dominate every physical clash and on high balls, he is practically unbeatable.

Hugely transformed by Julian Nagelsmann, Dayot is considered one of the most beautiful French promises to the position of Central Defending after Raphael Varane and Aymeric Laporte. The rest, as they say, is history.

Yes!… the rocky defender only makes news for his impressive football performances. However, there is an earnest desire by both fans and the press to know about his love life. Hence the question- Dayot Upamecano’s girlfriend?…  Does he have a secret wife?… Is there a WAG?

After hours of intensive research on the web, we’ve come to the realization that Dayot Upamecano (at the time of writing) has still not made his relationship public. Who knows?… he might have a secret girlfriend but has decided not to make it public.

You know exposing relationships at an early career stage could be risky (career ruining) and un-forgiven for young football. Perhaps, Dayot Upamecano’s parents and advisors have advised him to keep his love life private.

Getting to know his personal life facts away from his on-pitch defensive duties would surely help you get a better picture of his personality.

Starting off, Dayot has the attribute of being very playful. However, when he goes on the pitch he transforms himself, becoming very serious- a beast.

He is someone who feels very comfortable with what nature offers him.

Also, on his personal life, the footballer is not big on tattoos. Finally, he is resourceful, brave, passionate, a true friend and leader.

The road to football stardom wouldn’t have been as palatable as it is without the help of family members. In this section, we’ll provide you with facts about Dayot Upamecano’s family members, starting with his parents.

First and foremost, Dayot’s father is a tiler (a person who lays tiles) by profession and also a football lover. He is being credited for infusing the game of football into his son.

For Dayot, nothing is better than travelling to Guinea-Bissau, precisely Ilha de Jeta (his family hometown), with his dad to see his grandparents and other extended family members.

First and foremost, Dayot’s mother is a hairdresser by profession. This was revealed when the defender spoke with France-Bleu, a local radio station in France.

Unlike  Everton’s Tom Davies, Dayot doesn’t boast of his mum’s profession- thus making it show in his looks. He is not into showcasing flamboyant hairstyles/haircuts even thou both players mums are hairdressers.

As far as we know, Upamecano has two siblings; a big sister and a little brother. His closeness to his siblings is similar to the way he commits himself on the pitch. Dayot once revealed on his social media account that his little brother (pictured below) is his successor. By implication, it literally means his brother is also a footballer and defender in the making.

With a Net Worth of around 2 Million euros and a Market Value of more than 30 Million euros, it is fair to say that Upamecano is a millionaire footballer.

Now here comes a question!- What does the defender do with his €50,813 salary which he earns in a week?… This section reveals it all.

Starting off, deciding between practicality on the pitch and pleasure off it isn’t a difficult choice for Upamecano. The defender loves to spend his €50,813 per week salary enjoying Desert Safari Rides on the Arabian Desert Safari located in Dubai – United Arab Emirates.

Asides his obsession for Desert Safari Rides, Dayot also loves to spend his hard-earned monies enjoying boat rides during vacation. He would rather prefer this lifestyle instead of showcasing exotic cars, big houses (mansions), etc on social media.

People forget facts, but they remember childhood stories. In this section of Dayot Upamecano’s biography, we’ll provide you with some factual knowledge you never knew about the defender.

Breaking Down his Salary:

The defender in January 2017 signed a contract with Red Bull Leipzig, one that saw him netting a whopping salary of 2.5 Million Euros per year. Crunched Dayot Upamecano’s salary into smaller numbers, we have his earnings per month, week, day, hour, minute and seconds.
READ FULL STORY:
Boubakary Soumare Childhood Story Plus Untold Biography Facts

Since you started viewing Dayot Upamecano‘s Bio, this is what he has earned.

Did you know?… The average man in Germany who earns around €3,770 a month would need to work for at least 4.6 years to earn €208,333. This is the amount Dayot began earning (in a month) when he signed for Red Bull Leipzig.

What does his FIFA rating Say?:

Footballers with huge prospects are always in demand by FIFA Career mode lovers whenever a new FIFA is released. Dayot Upamecano FIFA stats reveals he is one of those with huge prospects. Who knows?… he could even be the future world’s best defender.

Who was his Idol while growing up?:

As a child, Dayot looked at the France team where he has his role models. One particular person stands out among these role models. Not a defender like him, but no other than the legendary Zinedine Zidane. Did you know?… it was the love for Zizou that made him play as a midfielder while he was younger.

What is Dayot Upamecano’s Religion?:

We have evidence that Dayot Upamecano’s parents must have probably raised him in adherence to the Christian religious faith. The footballer is big and not shy about his religion. He wears a neckless with the sign of the crucifix, a feat which implies he might be a catholic.

More so, after each match, Dayot has the usual habit of saying- “Thank you Lord”.