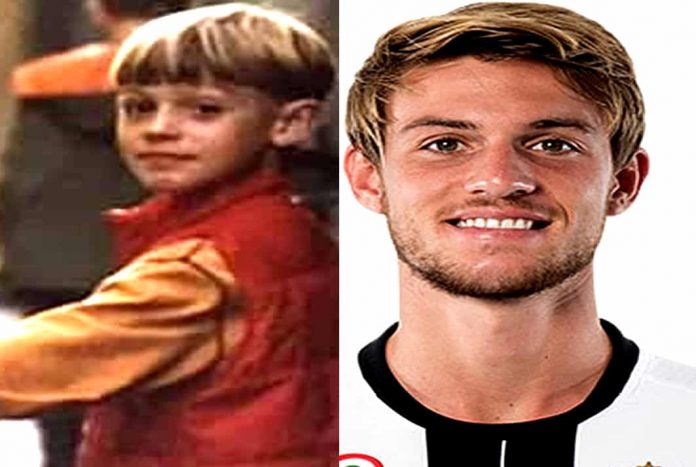 More so, the Italian’s Lifestyle, Personal Life, and other notable facts from when he was a child to when he became popular.

Yes, everyone knows he once got into the news for the wrong reasons- for being the first Serie A player to contract the deadly Coronavirus disease, also known as Covid-19.

However, only a few know the complete story of Daniele Rugani’s Biography, especially that of his Childhood, which is quite interesting. Now, without further ado, let’s begin.

For Biography starters, he is nicknamed “Daje Dani“. Daniele Rugani was born on the 29th day of July 1994 to his mother, Lia Rugani and father, Ubaldo Rugani in the city of Lucca in Central Italy.

The footballer came to the world as the second child of two children, born to his lovely parents.

Undisputedly known as an Italian national, Young Daniele grew up at the Ponte a Moriano neighbourhood in Lucca city with love from his parents and older brother identified as Simeone.

Below is a photo of one of Daniele Rugani’s parents- it’s his super dad who is seen cuddling both him and his older brother.

Growing up at Ponte a Moriano, young Rugani was a carefree and fun-loving child who had myriads of early interests ranging from playing football and tennis to loving ice cream and swimming.

Having a dad who loved sports, it was quite easy for Daniele to engage in these sporting activities.

One of Rugani’s sporting interests, particularly the one that relates to playing tennis was a sport in which the youngster did engage with some of his childhood friends on a part-time basis.

On the other hand, Rugani’s love for football went beyond friendly engagements, it was in fact, a family sport.

Did you know?…  Both of Daniele Rugani’s parents (pictured below) were die-hard fans of Juventus, a loyalty that Rugani did well to inherit.

Among all sports, it was the love for football that prevailed. Hence, it was not surprising that a very young Rugani would begin laying the foundation of his career at his local boyhood football school/club – Atletico Lucca.

At age 6 (the year 2000), the happy youngster said goodbye to his first-ever academy club in order to go face bigger challenges.

Moving on, Rugani began an earnest career buildup at the youth systems of Empoli football club. There, he spent over a decade of his youth career (2000-2011) developing his skill sets which are now part of his playing style.

By the time Rugani was of 18 years of age in the year 2012, Empoli gave him out to Juventus on a loan deal with both parties keeping tabs on how the defending prodigy made excellent appearances for the Old Lady’s Primavera (under-20) youth squad.

The young lad did well as an academy footballer. More so, the joy of Daniele Rugani’s family members knew no bounds at the time he helped his Juventus’ youth side win the Coppa Italia Primavera during his debut season (2012 – 2013).

Rugani’s performance at the tournament made Juve defy all odds in entering a co-ownership deal with Empoli for the high performing defender.

When conditions for the co-ownership deal were met, Juventus sent Rugani back to Empoli ahead of their 2013–14 Serie B campaign, giving him the opportunity to prove himself worthy of being a prospect that can be completely bought over by Juventus.

Fortunately, Rugani did well in converting the opportunity to a turning point of his career as his contributions to Empoli’s defence system saw the club finish second in Serie B and achieve automatic promotion to Serie A alongside Palermo, which came first.

Rugani, in the summer of 2015 officially returned to Juventus 2015 after spending a season gaining senior football experience with Empoli.

That marked his first senior career season by helping the team win the Serie A title. Rugani also went on to become a key defender for the club, especially after Leonardo Bonucci left for Milan in 2017.

Fast forward to the time of writing Daniele Rugani’s Biography, the defender is said to have received global attention not for his defensive capabilities but for being the first player in Serie A to contract coronavirus also known as Covid-19.

As a result, the defender has been in the thoughts and prayers of fans and the press who patiently awaits breaking news of when he would be free of the virus and return back to the field.

With his rise to fame, especially gaining global attention for the wrong reason, there has indeed been a lot of searches about the footballer. One of those involves inquiries on whom Daniele Rugani’s girlfriend might be.

After doing our own research, we’ve released that the defender has a girlfriend who is currently a finance and in no time, would be his wife.

Rugani is an enviable romantic involvement with his girlfriend turned fiancee, Michela Persico. The lovebirds – who have no son(s) or daughter(s) out of wedlock – met before 2016 at a tennis match that Michela was covering as a sports journalist.

Asides from being a sports journalist, Michela is a Tv presenter with a captivating beauty that has put an end to Rugani’s search for new girlfriends.

Like her heartthrob, she did test positive for coronavirus, but the odds are greatly in favour of the duo recovering soon.

Also, at the time of writing, there is breaking news by GiveMeSports that Daniele Rugani’s girlfriend and wife-to-be (Michela Persico) is currently pregnant even after contracting the virus.

Even in this time of great uncertainty, let’s hope both him, Michela Persico, and the baby would be healthy and free from the virus.

Amazing defenders owe the success of their journey in football to supportive families, and Rugani’s family is not an exception.

In this section, we’ll bring you facts about Daniele Rugani’s family members, starting with his parents.

Rugani’s dad, Ubaldo, is a passionate fan of Juventus as well as a cyclist who was once a two time champion of Italy amateurs.

He is – at the time of writing – a representative of fishing materials as well as a close dad to his son who makes him ever proud of being a Juventus fan.

Rugani’s mom Lia is a schoolteacher who doubles as his moral instructor. She never ceases to advise the defender to focus on his games and defy the bad stereotypes that football geniuses are known for.

What more? She is a fan of Juventus and a passionate one at that.

Daniele Rugani has just one older brother known as Simeone. Though not a footballer, the older brother has interest in football and has been spotted celebrating Rugani title wins on numerous occasions.

Away from Daniele Rugani’s immediate family, not much is known about his ancestry and family roots. Especially as it relates to his maternal and paternal grandparents.

Similarly, there are no records of the defender’s uncles, aunts and cousins. The development goes across the board for the defender’s nieces and nephews.

Did you know that Rugani embodies likeable traits that are characteristics of individuals whose zodiac sign is Leo? He is polite, elegant, modest, diligent, ambitious and open to revealing facts about his personal and private life.

Activities which Rugani engages as his interests and hobbies include cycling, fishing, playing tennis, listening to music, gaming, travelling, swimming and spending good time with his family and friends.

In this section, we’ll tell you how the defender makes and spend his money. Truth is, at the time of writing Daniele Rugani’s Biography, he has a net worth of over $39 million.

Streams of the defender’s wealth originate from the salaries and wages he receives for playing top-flight football, while endorsement contributes a great deal to his income.

With these monies, Rugani can afford to live the luxurious lifestyle of football geniuses who have no problem spending big on assets like cars and houses.

Despite his huge net worth and market value, the defender chooses to live a modest lifestyle as he is yet to be seen driving in exotic cars.

In addition, the value of the house which he lives in with his girlfriend is yet unknown.

To wrap up our Daniele Rugani childhood story and biography, here are little-known or untold facts about the defender.

On 30 March 2019, Rugani extended his contract with Juventus, keeping him at the club until June 2023.

This new contract increased his net worth, a feat that saw him pocketing a whopping salary of around €3.1 million per year. Breaking Daniele Rugani’s salary into smaller numbers, we have the following.

This is how much Daniele Rugani has earned since you began viewing this Page.

If what you see above reads (0), it means you are viewing an AMP page. Now Click HERE to see his salary increment by seconds.

Did you know?… The average worker in Italy needs to work for at least 5.9 years to earn €264,333, which is the amount Daniele Rugani earns in a month.

The defender has a good overall FIFA rating of 82. The rating, which is an aggregate of Rugani’s strengths and skillset, reveals how far the defender has come even as he is yet to achieve his potential rating of 85 points.

Rugani is tattoo free at the time of writing and might likely not have body arts for the rest of his career. As a defender, he prioritizes having a great body build – that matches his height of 6 feet 3 inches – over body beautification.

Rugani has always been big on pets, particularly dogs, from his early life to date. He can be seen below having a good time with the pets, which he always considers his close friends.

Daniele Rugani’s parents had probably raised him in adherence to the Christian religious faith of Catholicism.

Did you know?… The name “Daniele“ is a Hebrew Christian name which means “God is my Judge“. Having known that, the odds are greatly in favour of Daniele Rugani family members being Christians.

Did you know that the year 1994 is not only significant for beings Rugani’s birth year? It was the year that PlayStation did launch its first console.

Last, on Daniele Rugani’s Biography Facts, we provide you with his wiki knowledge base. The table below will assist you in finding information about him in a concise and easy way.

FACT CHECK: Thanks for reading our Daniele Rugani Childhood Story Plus Untold Biography Facts. At LifeBogger, we strive for accuracy and fairness. If you find something that doesn’t look right, please share it with us by commenting below. We’ll always value and respect your ideas.