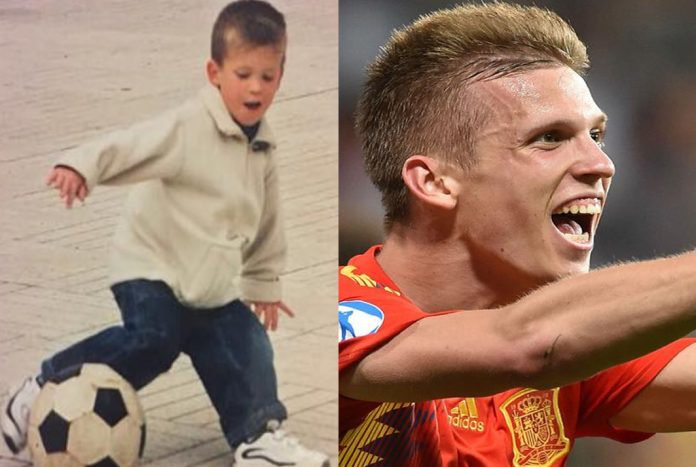 Our Dani Olmo Biography tells you Facts about his Childhood Story, Early Life, Parents, Family, Girlfriend/Wife to be, Cars, Net Worth, Lifestyle and Personal Life.

In the nutshell, this is a Life Story of the Spanish professional footballer, from his boyhood days, to when he became famous. To whet your autobiography appetite, here is his childhood to adult gallery — a perfect summary of Dani Olmo’s Bio.

Yes, everyone knows he is a quick dribbler with superb vision of the game. However, only a few consider our version of Dani Olmo’s Biography which is quite interesting. Now, without further ado, let’s begin.

For Biography starters, he bears the nickname “Olmic“. Daniel “Dani” Olmo Carvajal was born on the 7th day of May 1998 at the city of Terrassa in Spain. He was born to his little known mother and to his father – Miquel Olmo Forte (a former professional footballer turned coach). Here is one of Dani Olmo’s parents (his dad) who is well documented in this article.

The Spanish national of mixed ethnicity with Spanish and Croatian family origins was raised at his birth city in Terrassa where he grew up alongside his older brother identified as Carlos..

Growing up in a middle-class family background setting at Terrassa, Baby Olmo was a fun-loving kid who watched his brother enjoy playing football with dad. He soon became a partaker of the family’s sporting passion upon learning how to walk, while his dad and brother guided him to higher levels of fun in football.

Olmo was still very young when his dad enrolled him in local football club Terrassa FC for training. Although the then little boy was two years younger to be part of the club’s “Benjamin” squad, he was nonetheless admitted for considerable reasons.

To start with, Olmo’s father Miquel was the coach of Terrassa at the time. Above all, the football prodigy exhibited sufficient early life emotional and tactical intelligence that made up for what he lacked in age numbers.

The grounds of Terrassa FC were more than training surfaces for young Olmo. They were in fact, exhibition platforms for the youngster whose precocious ability on the ball was of interest to neighbouring clubs including RCD Espanyol. The joy of Dani Olmo’s parents especially his dad knew no bounds at the time his son passed trials with the Barcelona based club.

When the time was right, an 8-year-old Olmo joined RCD Espanyol in 2006 to begin an earnest career in football. “Earnest” because he began playing more competitive football kilometres away from his comfort zone.

It is worthwhile to note that Olmo was not an ugly duckling at RCD Espanyol, neither was he non-prosperous when he arrived Barcelona academy as a 9-year-old in 2007. In fact, he recorded a quick and impressive rise through the La Masia ranks finishing as Top Scorer in four out of his six-season with the club’s youth side.

Things began going south for the then-teenager when two Korean players arrived. The new kids – Kyeol-heui Jang and Lee Seung-woo – a winger and centre forward respectively, had big reputations as well as strong media presence surrounding them. As a result, Olmo was marginalized at the under-16 team. The development made Olmo join Dinamo Zagreb in a rather surprising move because he sensed a bleak future at Barcelona.

Dinamo Zagreb was a brave new world for Olmo who made his first-team debut with the Croatian side in February 2015 and went on to become a reliable goalscorer at the club. He was even named the best player of the Croatian First Football League for 2018 and finished at 11th place in Tuttosport’s ‘Golden Boy’ award, ahead of the likes of Josip Brekalo and Kylian Mbappé.

Fast forward to the time of writing, Olmo has achieved a meteoric rise similar to that achieved by Gabriel Barbosa, Alfredo Morelos, Lys Mousset and Rodrygo Goes. He is an established Winger / Attacking midfielder who has overtime drawn interests from English sides Chelsea and Manchester United. He is also being sought after by Barcelona who are confident of signing their one-time starlet that got away to make a name for himself in Croatia. The rest, as they say, is history.

Moving on to Dani Olmo’s love life, there have been speculations as to whether the football genius has a girlfriend or not. The speculations are continually being fueled by the fact that Olmo has left no signs that suggests if he is single or not. While many might be of the opinion that the attacking midfielder has a secret girlfriend, others believe that he is genuinely single and focused on his career.

Notwithstanding, there is no ruling out the fact that the winger might be soon identified as married to a beautiful wife, given his penchant for pulling off surprises like his surprising exit from Barcelona. Whichever way relationship status tilts for him in the future, we can authoritatively state that he has no son(s) or daughter(s) out of wedlock at the time of writing.

Whenever anyone counts his blessings, Dani Olmo’s Family especially his parents are being counted more than once. The footballer can never imagine having a better life without his family. In this section, we bring you facts about Dani Olmo’s family members beginning with his parents.

About Dani Olmo’s father: Miquel Olmo Forte is the winger’s dad. He was born on the 20th day of January 1966 and played professional football for Spanish lower league teams. The father of two has been managing teams ever since he hung his boots in 1998. He shares a close father-son relationship with Olmo and has been involved in key decisions which the winger makes about his future.

About Dani Olmo’s mother: Not much is known about Olmo’s mom other than the fact that she is of Croatian family roots and helped raised Olmo. Yes the football genius rarely talks about her, neither does he wax lyrical about his dad during interviews. Such dispositions only serve to affirm his professional nature which is a different ball game form his personal and private life.

About Dani Olmo’s siblings: Olmo is known to have just one older brother identified as Carlos. Like Olmo, Carlos began his career buildup with Terrassa FC and went on to become a professional footballer who – at the time of writing – plies his trade as a defender for Dinamo Zagreb II.

Olmo’s personality has the makings of Taurus Zodiac traits that include sensitivity, spot-on intuition, humility and stability. The traits sum up to give him the winger a cool persona which endears him to friends and fans.

Regarding how the winger makes the most out of his share of 24 hours, he engages a few activities that are considered to be his interests and hobbies. They include travelling, playing tennis, listening to music and spending quality time with friends and family.

Do you know that Dani Olmo has a rising market value of €35.00 million? However, his net worth is still under review at the time of writing this bio. No thanks to having just a few years experience in top-flight football.

Therefore, he neither spends big at the time of writing nor lives the luxurious lifestyle of accomplishment players who have exotic cars and expensive houses. However, Olmo does know how to party well and spend vacations at world resorts and parks.

The key to living a humble lifestyle is being attributed to Dani Olmo’s parents who strive day in day out to keep him grounded.

Dani Olmo’s childhood story and biography best wrap up with the following lesser or little known fact about him.

Religion: Olmo is not big on religion while there are virtually no indicators pointing to his beliefs at the time of writing. It is probably due to the fact that Dani Olmo’s parents didn’t bring their son up, making him adhere to a specific religious doctrine. Thus, it cannot be conclusively stated whether Omlo is a believer or not.

Tattoos: Body arts or tattoos are the least of Olmo worries at the time of writing. The attacking winger who has a height of 1.79 m is rather focused on improving his physique through regular exercise. Indeed he does fancy muscular build and would love to kook macho.

Smoking and Drinking: Like most humble footballers namely; Emi Buendía and Tariq Lamptey etc, Olmo is not known to smoke or drink at the time of writing. Reasons for such lifestyle borders on the fact that the football genius has not lost sight of the benefits accrued from living a healthy lifestyle.

FACT CHECK: Thanks for reading our Dani Olmo Childhood Story Plus Untold Biography Facts. At LifeBogger, we strive for accuracy and fairness. If you find something that doesn’t look right, please share it with us by commenting below. We’ll always value and respect your ideas.