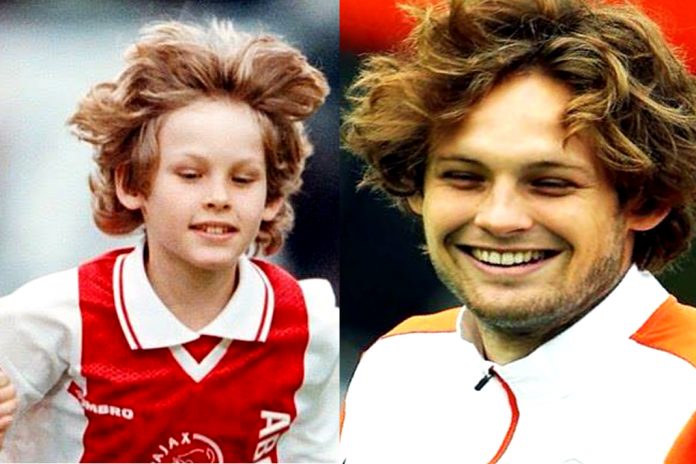 LifeBogger presents the Story of a Football Genius best known by the nickname; “Scholletje Junior“.

Our Daley Blind Childhood Story plus Untold Biography Facts brings you a full account of events from his childhood to date.

The analysis of the Dutch and Ex-Man U Footballer involves his life story before fame, family life, family connections and other off-pitch facts about him.

Yes, everyone knows about his versatility. However, only a hand few fans know much about Daley Blind’s Bio which is quite interesting. Now, without further ado, let’s Begin.

For Biography starters, Daley Blind was born on the 9th day of March 1990 in Amsterdam, Netherlands. He was born to his mother, Yvonne Blind and father Danny Blind.

Our Daley Blind childhood story is a story of a young and intelligent boy who upon birth was observed to be genetically blessed with extraordinary football talent, all thanks to his dad.

His father, Danny, placed him in a school which gave him the opportunity to play competitive soccer during sports periods.

Blind began his career in the youth academy of his hometown club, Ajax, the same club where his father Danny made his name as a professional.

Despite his dad’s influence, Daley still had a steely determination to make his dreams come true, and his ambitions were not just a passing fancy.

“My dad, who is also my best friend used to take me out on important matches as his personal mascot during his playing days.

He never bought me toys or games when I was younger, just a football. I’m entirely grateful for everything he did.

He always pushed me. Without him, I wouldn’t have this incredible journey that I’m on so far.’

Between the ages of 5 to 8 (1995-1998), Blind played for AFC (Amsterdamsche Football Club), which gave him a good foundation in soccer.

At the academy, he bonded well with youth coach Edwin Tielman, a father figure to him. In other to keep a close eye on his son, Danny decided to enrol his son at Ajax academy where he was a trainer.

Being the son of Ajax and Netherlands legend Danny Blind cannot be easy on any young footballer.

High expectations have always followed Daley Blind around, and early on in his career, it appeared he might struggle to meet them.

Through his dad’s influence, Blind started a successful career at Ajax and rose through the youth ranks, earning himself a senior place in the team. It was through this period that his dad rose to be a board member of the club.

Through strong football connections in his family, his dad later became the assistant coach of the Netherlands.

This also coincides with the time Daley Blind won the team player of the year for Ajax in 2013, hence getting a call from Louis van Gaal for national team duty.

It was just days before the 2014 World Cup that his father’s friend Louis van Gaal got his Manchester United job.

Blind Snr was the United boss’ assistant coach during the World Cup in Brazil and was sure to have had a role in his son’s move. 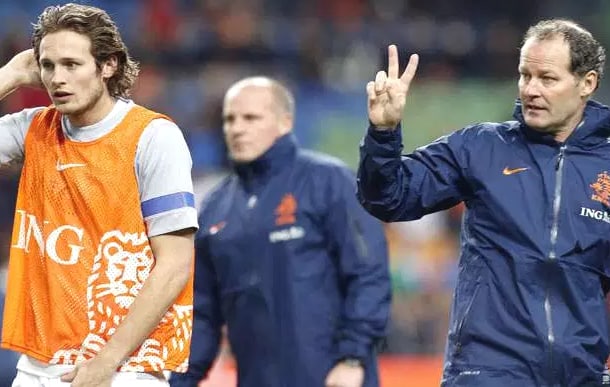 Just a year after the tournament, precisely on the 30th of August 2014, Manchester United reached an agreement to sign Blind.

Ajax stars who came after him – for example, the likes of Sven Botman, Perr Schuurs, Matthijs de Ligt, etc will always reference the works of Daley. The rest, as they say, is now history.

Football is a golden tree, a place where millions of youth have found shade and love.

Behind every great man, there is a great son and in that son exists a beautiful, glamorous lady. Blind has been in a long-term relationship with his lookalike girlfriend Candy-Rae Fleur.

Candy-Rae is a model and dancer with a strong resume which includes dancing with Robin Thicke at the MTV EMA’s.

She’s from Amsterdam and a graduate from Hermann Wesselink College (2007 graduating set). As her LinkedIn page puts it, she currently works as a broadcast media professional.

It is not known how long the pair have been together, but they look seriously loved-up in the picture below. 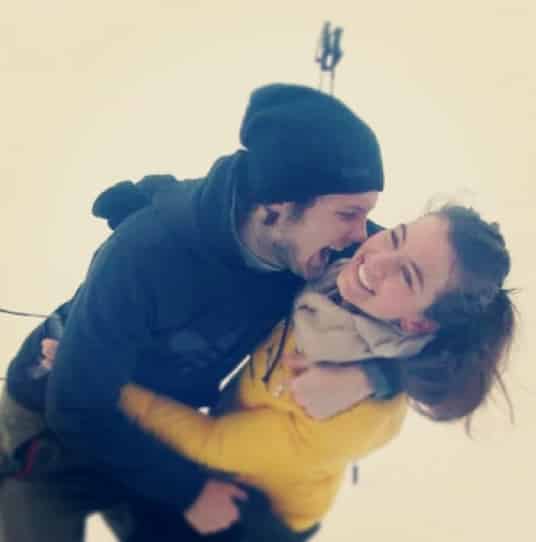 As Daley Blind puts it; “I see myself as a regular guy, and us, a normal couple.

I think it is sometimes difficult for my girlfriend Candy-Rae because dating a footballer which literary means having lots of attention.

The love of my life gives me great support, and I also try to give the same to her.”

Despite the normal way of hiding herself from the limelight, Candy-Rae Feur has once revealed her extroverted nature by bringing her dancing crew to support her boyfriend.

Having a face cap called “Team Blind” was a new way to show support for the Manchester United defender.

As pictured below, the group of beautiful blondes and brunettes were all seen with the fashion accessory “Team Blind snapback caps” which they used in grabbing the attention of fans as they walked into the stadium. 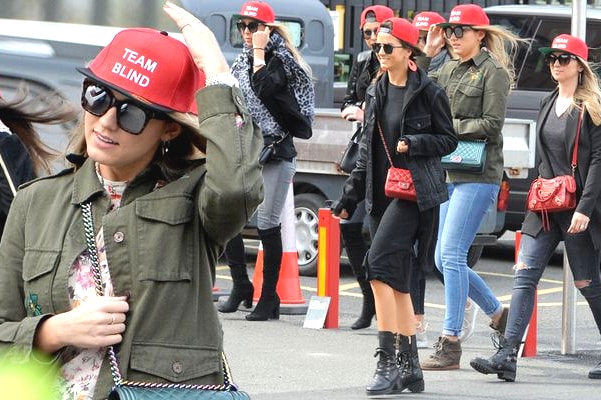 Candy-Rae loves fashion, but she won’t go all dolled up to matches. She just makes sure she wears something red and, for national support, something orange as seen below. 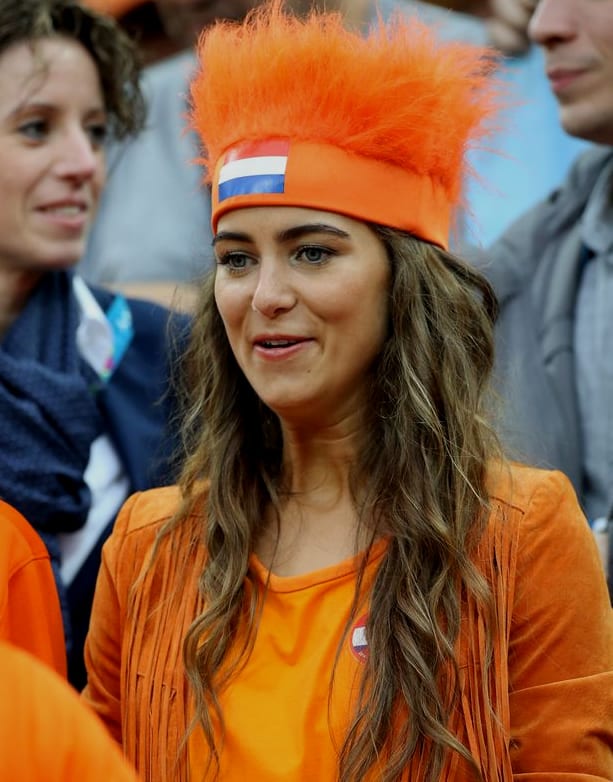 Despite being a footballer’s girlfriend, Candy Rae does not like to be referred to as a WAG. She once said:

“I am not a WAG, I don’t feel like a player’s girlfriend. It is the other way round! He is a dancer’s man!”

Fleur added: “It’s uncalled for at United, every wife or girlfriend will get photographed wherever they go.

When we were at Ajax and at times we all went out, there was never a photographer around. 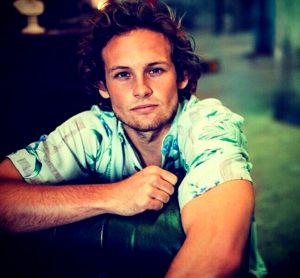 Blind is very friendly, and he often finds himself in the company of very different people. He is are selfless, always willing to help others, without hoping to get anything back.

Daley Blind’s life is characterized by empathy and expressed emotional capacity. He is very compassionate and extremely faithful to his girlfriend, Candy-Rae Fleur.

Personal Strengths: He is compassionate, artistic, intuitive, gentle, wise and very musical thanks to his girlfriend Candy-Rae Fleur.

Personal Weaknesses: He could be fearful, overly trusting, sad and has the desire to escape reality.

What Daley Blind Likes: Being alone with Candy-Rae Fleur, sleeping, music and romance with her.

What Daley Blind dislikes: People who claim they know-it-all-all, being criticized, the past coming back to haunt him and cruelty of any kind.

Daley Blind comes from a rich or upper-class family background. In the Blind house, it is football that matters most.

Yet the house is not full of football shirts as they are more females than males. Now we introduce you to members of the Daley Blind Family.

The mother of Daley Blind, Yvonne Blind is pictured below with her husband below.

Yvonne Blind is known as someone who assisted her son, Daley in moving into Manchester United.

The black page of Yvonne Blind defines a moment when she and her husband were both involved in a traffic accident in 2006.

The other person involved in the accident (the victim) had to be cut out of the car and transported to the hospital.

Yvonne’s husband stated that regret: “The fact that I have been sitting behind the wheel with alcohol is inexcusable and should never have happened.

I am deeply ashamed and realize that someone in my position should have taken responsibility. That this has not happened makes the situation all the more painful.”

Daley Blind’s grandfather hails from Hellevoetssluis. He is a well-known personality in the Zeeland Dutch province thanks to his distinguished career in the power industry.

Daley Blind’s grandmother is from Vlissingse, a municipality in South-West Netherlands. He has an uncle whom he once painfully witnessed his death by a moped accident.

Daley Blind has two amazing sisters in the names; Zola and Frenkie Blind. 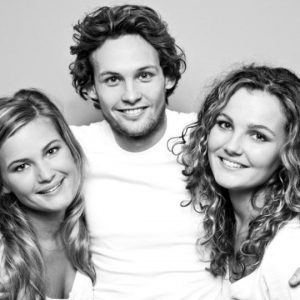 From the look at their photos, it seems Zola is older than her brother and Frenkie is much younger. Zola is also helpful to her kid brother.

Thanks to the head of the home, Soccer has remained a family affair for the Blind family. Blind starts his professional career as a right defender. 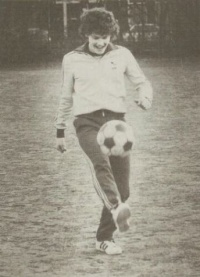 He debuted on 29 August 1979 in professional football at Sparta. In July 1986 Blind went to Ajax, thanks to technical director Johan Cruijff.

He played a total of 537 games in the Dutch league and scored 45 times. Danny had a perfect resemblance with his son Daley during his playing days.

Danny managed the Eredivisie champions, Ajax in 2005 before taking up a role with the Dutch national side, under Van Gaal in 2012.

In 2017, he was fired as the national team assistant coach due to poor results. Born in East Souburg, Danny played for Sparta Rotterdam, Ajax and the Dutch national football team.

At Ajax, he got so popular that the club board of directors granted him a job as a trainer and later made him a board member.

Danny Blind had an impressive career as a defender for the Netherlands. He is the only Dutch soccer player to have won all international club competitions recognized by UEFA and FIFA.

Chris Smalling once tweeted about his mother liking Daley Blind more than him. 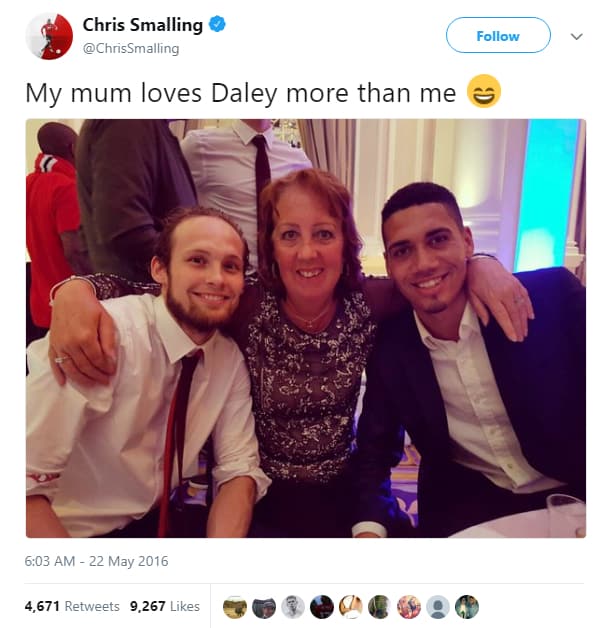 While fans attribute her likeness to Daley due to Chris Smalling’s poor performance, one particular fan’s comment caused some outrage as seen in the tweet below. 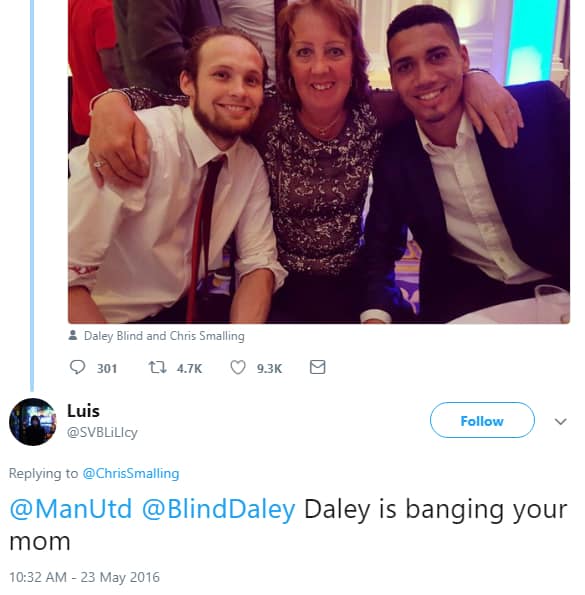 As a defensive midfielder, Blind likes to break up play and quickly set up new attacks after winning possession.

As a left-back, he seems to know exactly when to surge forward and when to stay back. Key in all of this is Blind’s tactical awareness and intelligence.

As far as his strength is concerned, it’s about taking the right action at the right time.

It could be argued that a Daley Blind is a defensive midfielder who is not so physically strong and not able to launch a good tackle, especially to powerful strikers.

Upon observing him, one would conclude that he looks a little too weak. As a full-back, his lack of pace could pose a problem.

Thanks for reading our Daley Blind Childhood Story plus untold biography facts. At LifeBogger, we strive for accuracy and fairness. If you see something that doesn’t look right in this article, please place your comment or contact us!