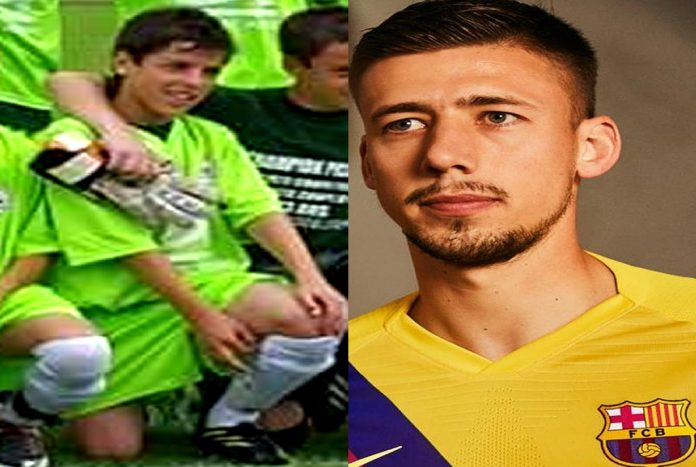 LB presents the Full Story of a Football Genius with the name “Lenglet“. Our Clement Lenglet Childhood Story Plus Untold Biography Facts brings you a full account of notable events from his childhood time to date.

Yes, everyone knows he is a long term prospect for FC Barcelona, a defender who is more than capable of handling physical attackers. However, only a few consider Clement Lenglet’s biography which is quite interesting. Now without further ado, let’s begin.

Starting off, his full names are Clement Nicolas Laurent Lenglet. Clement was born on the 17th day of June 1995 to his father Sébastien and mother whose name is unknown in the city of Beauvais, France.

Clement Lenglet’s family are Beauvaisiens and they have their origin from Beauvais. This is a city in northern France located approximately 75 kilometres from Paris. Beauvais is the home to Beauvais Cathedral, one of world’s most beautiful church cathedral with Gothic architecture (a style that flourished in Europe during the High and Late Middle Ages).

Clement Lenglet was brought up in a Christian middle-class family home. He was the first child among 3 other brothers (pictured below) born to his parents. Clement grew up alongside his two immediate younger brothers whose age difference are not very much as observed.

Judging from the photo, you’ll realize that the three brothers later had a kid brother who is known to be the baby of the Lenglet household.

Early on as a child, his dad Sebastian Lenglet family took his family away from their home city of Beauvais in order to settle in Jouy-sous-Thelle, a Commune in the Oise department in northern France. It was at Jouy-sous-Thelle Clement picked up the interest in football.

From an early age, Clement had the goal to become a professional footballer. He was different from other kids in Jouy-sous-Thelle who also had similar aspiration. What made him different was that he saw that aspiration as the beginning of a struggle. Instead of going to see his friends or sticking with PS (PlayStation), Lenglet would prefer to be in the garden with his father and uncle. They were his first trainers.

Having a former footballer for a dad, it was easy for Clement Lenglet to get all the support needed to lay his career foundation. Away from his family football garden, Clement Lenglet who was four years old at that time began competing with seven years old kids. He was given the number 10 shirt because he was more talented than others despite being the smallest.

One year later when he was age 5, Lenglet began attending trials at nearby football academies. He successfully passed trials with Montchevreuil FC, a small club located in the small French commune of Oise nearest to his family home. The close proximity was the reason why his parents allowed him to join the club.

Clement knew what he wanted right from the moment he joined Montchevreuil as revealed by one of his childhood friends, Matthieu Quesmel whom they played together at the club (2001-2007). He was among other kids who were given the ideal football values ​​needed for them to begin their career journies.

Clement Lenglet’s determination to succeed saw him joining another club named Chantilly. It’s an academy which has gained a reputation for training and identifying young talent in France. Upon joining, Lenglet observed the club to have Kevin Gamero in the star graduate in their history books.

Lenglet’s youth coach in Chantilly, Sylvain Dorard converted him to the left side upon on his arrival at the club. Two years later, he got converted, this time into a central defender. Clement Lenglet began to follow in the footsteps of Kevin Gameiro. He helped his team early on in winning his first trophy.

Since after his first trophy, Clement Lenglet began to consider making his passion to be his job. After adding his first trophy in his CV, he began to have that believe he was going to make it. Lenglet’s dad was not left out in the sacrifice of ensuring his son career remains a success. Clement once said about his dad’s involvement in his career;

“My father could sometimes make 3 trips back and forth in the week between Chantilly and my family home to take me to training, plus the matches of the weekend.”

Clement knew that to achieve success, it was necessary for him to have technical quality in his plays followed by a little luck. He also knew he needed an opportunity from recruiters from bigger clubs and most importantly, not getting hurt. Those were his watchwords which paid off.

At Chantilly, there indeed came recruiters on the sideline who watched out for the best players and Lenglet was among those watched. At the age of 15, he was already spotted by scouts from Nancy, a club whose senior team played in the French Ligue 1. Clement Lenglet was successfully acquired by the club.

Lenglet began playing senior football with Nancy as at the time the club was stuck in Ligue 2. Did you know?… He grew up through the club’s senior ranks, becoming a captain in the process. As a leader, he assisted the club in winning it’s Ligue 2 trophy.

Leading his club to win his first senior career trophy saw Lenglet earning a record of becoming the youngest player ever to be in the League 2 Best XI.  It also made him get courted by major European clubs among whom which was Sevilla.

On 4 January 2017, Lenglet moved to Sevilla FC where he continued to shine. Did you know?… He was part of the Sevilla side that kept a clean sheet in their defeat to Man United in the 2017-2018 Champions League round of 16 first leg. Clement Lenglet was also instrumental to Seville’s Europa League title push in 2017.

Did you know?… Lenglet’s performance made ESPN FC put him into their Champions League Best XI for the 2017/2018 season. This feat also caught the eye of FC Barcelona who included him as one of its priorities in their summer transfer window of 2018.

Clement Lenglet became the 22nd French player in history to wear the colors of Barça. The injuries of Vermaelen and Umtiti gave Lenglet the opportunity to lay a claim to Barca central defense position behind Gerard Pique. As at the time of writing, he is considered as a long term prospect for FC Barcelona and the French football team. The rest, as they say, is now history.

Behind the successful footballer, there exists a glamorous girlfriend in the beautiful person of Estelle. A lot of football fans are aware of the fact that Interracial dating is increasingly common among black guys dating white girlfriends. The reverse however, is the case between Estelle and Clement.

The love story of Lenglet and Estelle is one which escapes the scrutiny of the public eye simply because their relationship life is drama-free. Both lovers enjoy a solid relationship which is built on a solid footing and solely on friendship plus love for one another.

Judging from the intimate photo above, you would agree with us that a handsome player like Clement deserves an equally beautiful wag. With the way their relationship is going, it is certain that marriage could be the next formal step for the two love birds.

Thanks to racial juxtaposition, Clement and his girlfriend would in the future remain one of the most established couples of FC Barcelona and the French national team.

Getting to know Clement Lenglet’s personal life would help you get a complete picture of him. Starting off, Lenglet is someone who believes he wasn’t born a winner or conqueror but grew to become it.

Clement is a hard worker who does not go out and acts very different from his teammates. Eric Abidal, the sports director of Barcelona as at the time of writing once confessed that he rarely sees such kind of behavior from other players. Playing football is what sums up his life. Ideally, Clement is someone who thinks, eats and sleeps football.

Again on a personal note, Lenglet loves to weigh himself every day and is very careful about his hygiene as regards what he eats, says his father, Sebastien. Clement loves to eat at home and never goes to a fast-food restaurant.

Finally, Clement is someone who does not see FC Barcelona as the greatest height in his career. Rather, he sees the club as the opportunity to achieve something even greater.

Clement Lenglet’s family are at presence reaping the benefits of instilling a tough mentality into their very own. While his brothers often come visit and sometimes live with him in south-west Barcelona, Lenglet’s parents have remained more in Jouy-sous-Thelle, France.

It can be hard for footballers to deal with retirement – but Lenglet’s dad, Sebastein is among those who at least got the chance to continue living his dream through his son. While his dad has shown much support through his career, Lenglet’s mum lives a quiet low-key life.

Thanks to Clement’s success, It appears “All our family is on a cloud,” jokes Nathan Lenglet- one of his younger brothers. Without a doubt, Clement has become a role model for his brothers.

Deciding between practicality and pleasure is never a difficult choice for Clement Lenglet. Though making money is a necessary evil, but Lenglet will not care to spend much of it thanks to the ability to keep their finances in check and organized.

Not showcasing flashy cars, big mansions and exotic dressings is surely a sign that the financial aspect of his life is under control.

RELIGION: It appears Clement Lenglet is a Christian by faith. His middle name Nicolas suggests he is likely to come from a Catholic family who probably worship at the Beauvais Cathedral.

EVENTS THAT HAPPENED THE YEAR HE WAS BORN: The year (1995) when he was born saw eBay going live and the American epic war film “Brave Heart” getting released. It was also the year Indian government officially renamed the city of Bombay to Mumbai.

FACT CHECK: Thanks for reading our Clement Lenglet Childhood Story plus Untold Biography Facts. At LifeBogger, we strive for accuracy and fairness. If you find something that doesn’t look right, please share with us by commenting below. We’ll always value and respect your ideas.