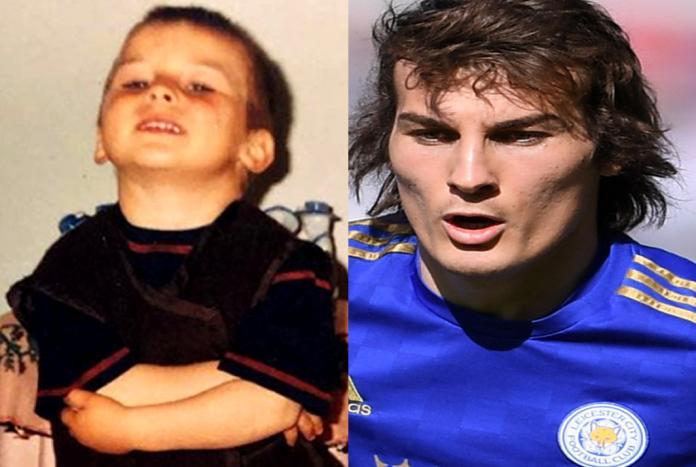 In a nutshell, this is the history of Caglar Soyuncu, the Turkish professional footballer. We begin from his early days right to the moment he became famous in the beautiful game of football.

To give you a taste of the engaging nature of Caglar Soyuncu’s Bio, here is a pictorial summary of his life.

Yes, everyone knows he is that unique, good-looking defender, one who is fearless and wonderfully made for the modern game.

However, not many football fans have read a detailed version of Caglar Soyuncu’s Biography, which is quite interesting. Now, without further ado, let’s begin.

For Biography starters, Caglar Soyuncu was born on the 23rd day of May 1996 to his parents, Mr and Mrs Ömer Söyüncü, in İzmir, Turkey.

Upon his birth, his parents, who followed Turkish family customs, made sure he bore the toughest written names with diacritic dots ever known to English football fans. That name is- “Çağlar Söyüncü“.

Ceglar Söyüncü has his family origin from the Izmir, a metropolitan Turkish city (the third most populous city in Turkey) once controlled by the Roman Empire under the famous ALEXANDER the GREAT who once owned the city.

By implication, it is fair to say that little Ceglar Söyüncü (pictured below) could have his family roots and lineage from the Great Lord of Asia- ALEXANDER The GREAT.

Growing up in a middle-class family home, Caglar Soyuncu spent most of his early life in the Menemen district of İzmir alongside his parents and other family members.

He was brought up in a family which has high regard for Islamic religion and culture.

For little Caglar, it was all about playing football. This favourite hobby became part of him, especially after his studies.

With the excitement of the game, Caglar would play football all day long, especially during holidays, without being bored.

Soon, the distinctive kid developed an interest in playing football professionally, a decision greatly supported by his parents.

After much consultation with his parents and school teachers, Soyuncu in his quest to become pro got himself enrolled with Menemen Belediyespor. This is a local football school in the Menemen district of İzmir.

Upon enrolment, he (pictured below) was deployed as a striker and not a defender which the world later knew him to be.

Menemen Belediyespor’s football academy gave Soyuncu the chance to showcase his talent. He showed it in front of Agents, Scouts, Coaches and Club managers.

For admirers, there was never much doubt that he was heading in the right direction. Just like every other kid in the academy, Soyuncu aspired to play in the İzmir Football League- the regional football league of Izmir, his Turkish city.

After six years playing with Menemen Belediyespor, Soyuncu in the year 2011 saw his professional dreams with the İzmir Football League coming to pass.

He had a successful trial with Bucaspor, a club that plays in the regional football league of his city, Izmir. At the club, young Caglar Soyuncu was dropped back to midfield. And later, a centre back which he continued with even as a professional.

The Strategy of Dropping down the Lower Leagues in order to Get Up:

For most young footballers who were once set for academy graduation (eg. John Lundstram), the best way to secure graduation or get recognized by football scouts is to go down to lower leagues.

There, the first-team selection is assured, and transfer could be easily bargained.

This became a perfect plan for Caglar Soyuncu, who dropped to Gümüşorduspor, the Turkish amateur league. There, he became treated like a king, securing his way into academy graduation.

Just after academy graduation with Gümüşorduspor, Söyüncü was acquired into the senior team of Altınordu. This club played in the second level of the Turkish football league system. This is also a club well known for projecting young players to other parts of Europe.

In the wake of the 2016/2017 season, Caglar Soyuncu walked his way into Europe, signing with the German club SC Freiburg.

It was a decision he felt was the best choice for his career and his improvement. Soyuncu arrived at the club at the right time. A time SC Freiburg had just got promoted to the German top-flight competition (Bundesliga).

At SC Freiburg, during the 2016–17 season, Caglar began to take a ruthless approach to the act of defending. Did you know?… this club once boast of great players like the Ex-German coach, Joachim Low. Also, Nico Schlotterbeck – the German modern-day defensive genius.

He endured a meteoric rise to prominence in just a season, becoming one of the hottest defensive properties in German football and Europe at large.

Çağlar Söyüncü’s rise projected him straight into the Turkish national team. This development saw him getting linked with Man City, Bayern Munich, AS Roma and Leicester. It was Leicester who finally prevailed.

On 9 August 2018, Söyüncü joined Leicester, a club looking for defensive options following continued speculation over the future of their star defender, Harry Maguire.

The departure of Maguire left many Leicester fans heartbroken, and Caglar Soyuncu became the man to heal the brokenhearted, an act which left Leicester fans asking; Who needs Harry Maguire?

Before the 2019/2010 mid-season, Caglar Soyuncu had already become a cult hero for Leicester. His doggedness in defence earned him much praise from Brendan Rodgers.

Soyuncu’s defensive powers, aggressiveness, playmaking and heading attributes played a huge role. It had a positive effect in making Leicester reach second in the first half of the 2019/2020 EPL season.

Without a doubt, the Leicester fans and we football fans are on the verge of seeing another Carles Puyol and Mat Hummels (in the making) blossoming his way into a world-class talent right in front of our very eyes.

Çağlar Söyüncü is indeed one of the best among the endless production line of central defenders coming out of Europe. The rest, as they say, is history.

Is Caglar Soyuncu Married? … Does he have a Girlfriend and Wife to be?

By winning the hearts of Leicester fans, lots of female fans have asked if he has a girlfriend or wife.

YES! There is no denying the fact that his cute looks coupled with his style of play wouldn’t place him at the top of every lady’s boyfriend’s wish list.

After so much research over the internet, It appears Çağlar Söyüncü has made a conscious effort not to reveal his girlfriend or wife (that is if he is already in a secret marriage) at the time of writing.

On the other hand, we know premier league football can be unforgiven. Especially when it comes to not mixing the game negatively with relationship matters.

While some players see their decline due to factors like age or a new team/system, other sources of decline might be non-other than a bad relationship.

For this reason, most footballers would rather avoid being in early relationships. Or start showcasing their girlfriends at certain critical stages of their careers.

Getting to know Çağlar Söyüncü’s personality would help you get a complete picture of him. Here, we’ll tell you who he is away from the person you regularly see on the pitch.

Starting off, he is a cool guy, one who loves to display humbleness, being cheerful and smiling a lot (typically not the average character of a modern-day footballer).

Also, in his personal life, Soyuncu is much of an outgoing and friendly person. Away from playing football during the holidays, you could easily find him in the company of different people.

Soyuncu mixes with people of all classes, some of whom he helps financially without getting anything back in return.

When it comes to Caglar Soyuncu’s lifestyle, he is someone who maintains a balance between spending and saving money.
Without a doubt, his net worth of 12.5 Million Euro (10.8 Million Pound) and market value of 18 Million Euro (15.5 Million Pound) surely makes him a millionaire footballer.
Being a millionaire, however, doesn’t transcend into a glamorous lifestyle. A lifestyle easily noticeable by a hand full of expensive cars as observed below.

For his lifestyle summary, we could conclude that Caglar Soyuncu is an antidote to exotic living, (at least) at the time of writing.

Starting off, Caglar Soyuncu’s Family, at the time of writing, live a private and low-key life in Turkey despite the paparazzi always being on the prowl and the numerous ways to connect with social media.

Going through his social media, Caglar hardly features his parents or family members on his profile.

While their identity remains a secret, the closest he has to family remains his best friend and national teammate, Cenk Tosun.

Despite making a conscious effort to avoid any spotlight on their private life, there exist in Caglar, a sense of duty to his brother(s), sister(s) and relatives.

The Shocking Resemblance to his former king who once ruled his city: At one point or the other, we sometimes bump into a stranger who tells us we look just like someone they know, right?… Well, we have picked out that of Çağlar Söyüncü and Alexander the Great. You be the judge!

Being the most followed sports in the entire world, it is obvious that footballers serve as inspirations to millions of their fans who look up to them, considering their idols.