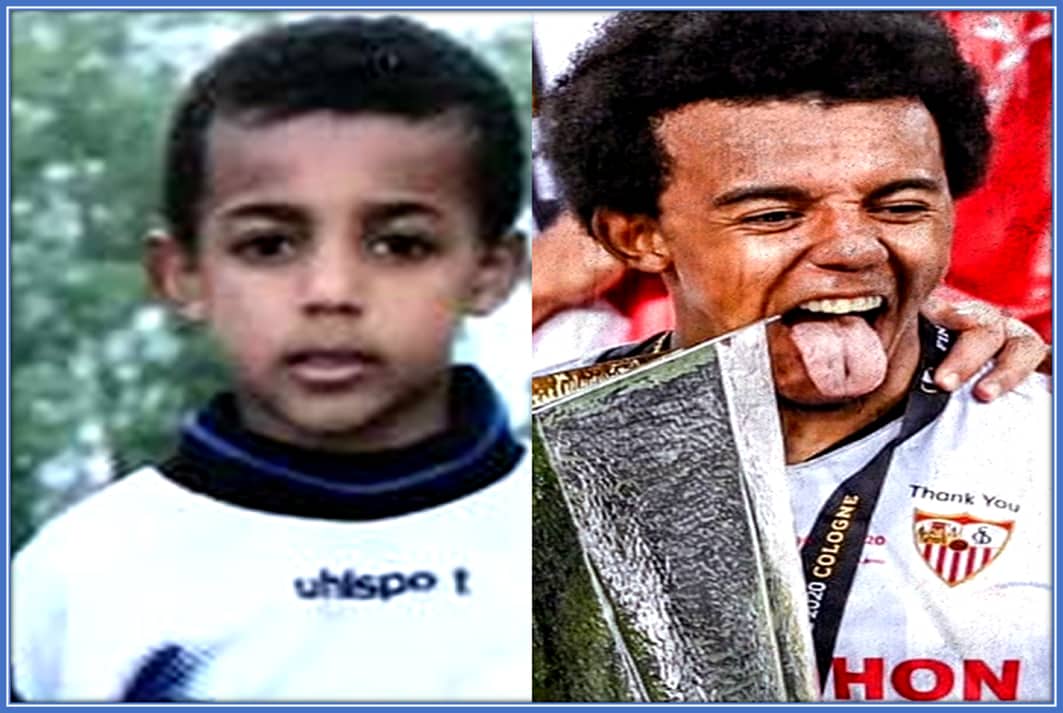 In a nutshell, we portray to you the history of the French professional footballer who is a defender. Our story begins from his early days, right until when he became famous in the game.

To whet your autobiography appetite on the engaging nature of Jules Kounde’s Bio, behold a summary of his life.

Yes, we all know la nova Joia descoberta per Sevilla is an indisputable holder. No wonder many Big European clubs beg for his signature and dream to have him in their team.

Despite the many accolades to his name, we realize that only a few soccer enthusiasts have read Jules Kounde’s Life story. We have prepared it, for the love of football. Without further ado, let’s begin.

Less than 12 months after his birth, Jules Kounde’s family had a change of heart as regards living in Paris. His mother (in particular) left the capital of France with one-year-old Jules, to a small village, 40 minutes from Bordeaux.

As a little boy, neighbors knew him to be reserved. More so, a shy boy who would always take his time to trust people attempting to get close. As luck would have it, Football became an escape – away from his introverted nature.

Thanks to the beautiful game, our boy made new childhood friends with only whom he laughed, teased, and made fun with.

Growing up alone in Landiras, with only his mum, implies the fact that a single parent raised him.

Jules enjoyed a middle-class upbringing and he never suffered lack during his childhood. Truth is, the defender isn’t the typical successful footballer with a rag-to-riches story.

Before his teenage period, Jules Kounde’s mother had always supported the choices he made. It was easy to care for him because he is her only child.

Results from Lifebogger’s research put it that Kounde’s Dad never had a critical role in his development. With that at hand, we can conclusively say his parents may have divorced or separated.

Judging by his baby-faced looks, you can tell that the French footballer is of a multiracial ethnic background.

Jules comes from a mixed ancestry and according to Wikipedia, he is of Beninese descent. What does this mean?… It denotes, that Kounde’s father is from West Africa, precisely the Republic of Benin.

Although an excellent student, Jules was so quiet and reserve. This attitude made him become a withdrawn pupil. During an interview with OnzeMondial, the central defender said the following;

The journey to stardom began at the age of five. This was when the youngster began grazing football in his village.

He started amateur football with Fraternelle de Landiras until the age of eleven. When featuring for them, Jules had difficulty in detecting his position. At first, he tried all areas until he eventually settled as a goalkeeper.

According to the rising star, it is a bit of a terrible memory. Back in the days, Jules Kounde grazed low-level football in a poor team who often get defeated in their games.

He was a kid who didn’t enjoy losing, as it often drove him crazy. Sadly, Jules, out of the anger of suffering defeat, often poured his frustration on his innocent mother.

As the situation became worse, Jules Kounde confessed (via OnzeMondial media) that his mother took action.

She rushed to visit a psychiatrist whom she begged to help address her son’s anger issues.

Unfortunately, the solution never came so quickly and young Kounde was advised to change his team. Funny enough, the Psychiatrist also advised his Mum on this;

At last, things came back to normal between mother and son. While Jules multitasked between studies and football, he changed clubs but remained close to his family home.

In 2009, the ambitious boy moved to Cérons where he stayed for 12 months. Rising above his teammates, he left for a bigger club- La Brède, which featured in a better division.

Understanding his desire to earn a living with the game, Jules abandoned his studies at a private high school.

Just after that, he pressed harder and got an opportunity for Bordeaux’s U13 trials, which he passed with flying colors.

Because of his introverted character, Jules witnessed a tough start to life at Bordeaux. Little by little, he improved, but with a slow pace.

At some point, his coach asked him to open up, talk more and learn to communicate. He compelled Kounde to be friendly, both on and off the pitch. The footballer once said;

In no time, things got better as the youngster showed massive improvement in communication and managing aggression. Out of 26 matches, he guided his team to win 24, including a title with Bordeaux’s youth.

In no time, the local native established himself as one of the best defenders in Ligue 1. This feat saw many top clubs circling around him like sharks.

After the competition, the Frenchman, with his marveled sense of anticipation and analytical capacity, continued to be the boss of defense for Sevilla.

In 2021, when he scored a splendid goal (video below) against FC Barcelona (Copa del Rey semi-final), the football world got stunned.

Without a doubt, we football fans are on the verge of having the power header blossoming his way into a World best. The rest, as we say of Jules Kounde’s Bio, is history. 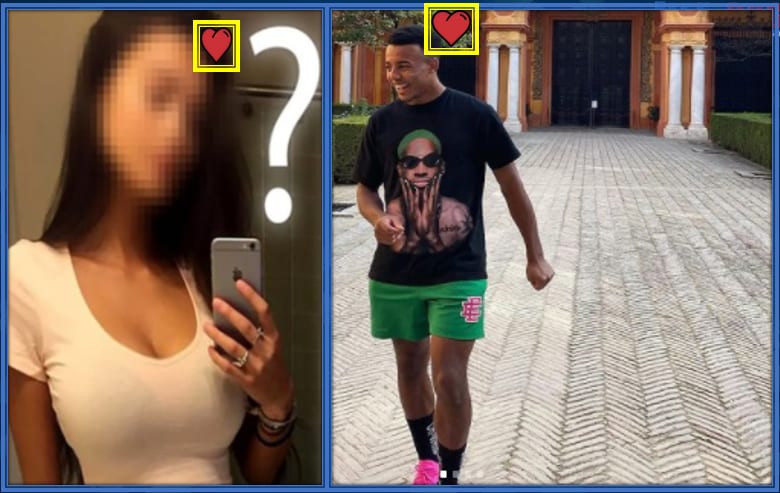 Our team has searched over and as of the start of 2021, there are still no signs of a Kounde’s WAG.

Is he single?… probably not. Does he have a Girlfriend?… probably (yes) a private affair – at least for now. Finally, there are no signs of the Landiras native having any child outside wedlock.

Away from everything football, friends and relatives in Landiras perceive him as a reserved guy, very calm and attractive. As regards hobbies, Kounde is a lover of Tennis.

He enjoyed the racket sports for a long time before admitting it was impossible to continue it with football.

In the photograph below, the footballer jokingly warned fans not to mock him for driving a Citroen hatchback.

Kounde lifestyle appears similar to that of Ngolo Kante, who loves everything about a low-budget car. The Les Bleus footballer portrays an anti-flash attitude in this act.

There is no such thing as showcasing to fans an exotic house (mansion), or things like wearing fanciful clothes, nightclubbing, keeping girlfriends and buzz, etc.

Results from research have it that throughout Jules Kounde’s childhood moment, his Dad was absent in his life. Thankfully, we got aware Jules had a conversation with him as soon as he turned 16. According to the Sportster;

Jules Kounde’s personality differs from his mother’s. He once said that he inherited most of his character traits from his father.

Thou little documentation exists about his Dad, we are sure his dark completion also comes from West African.

According to the footballer, the woman who gave birth to him is not a careerist like he is. Kounde told Onze-Mondial that his mum is his financial advisor.

Even though she doesn’t watch football, the single mother has been the type who would come view her son in nearly all of his matches. The super mum does that in both windy or rainy situations.

Jules Kounde made the statement about his mother in an interview with French outlet, Onze-Mondial. He is super proud of her, for being the only one who raised him.

At 18, the lad completed his education and now, he is a holder of a BAC. Truth is, he wouldn’t have achieved this without his mother.

For sure, his grandparents, uncles, and aunt – far away in Benin republic – must have proudly identified themselves as extended members of his family.

For them, it is definitely a thing to be super proud of. We sure hope the Jules visits Benin republic and identifies with them.

Are you aware?… where he comes from, the average man in France who earns 39,099 euros per annum would need to work for 63 years. This is how long it would take to make Jules Kounde’s annual salary with Sevilla.

In a French interview, Jules said it would be a dream NOT TO DIE but live forever. He believes that one day, a genius is going to invent a miracle serum that would help everyone stay alive.

Hmm… Do you think that is possible? Kindly share your view on this in the comment section.

We have not seen him do the cross sign whenever he enters the field. Also, pointing his fingers to the sky when he scores. However, we are aware of his middle name ‘Oliver’ to mean ‘Olive Tree’.

As a child, Jules was more of a perfectionist, one who reacted bitterly whenever his team lost games. In this regard, Football was a matter of winning OR fighting with his Mother.

As he grew older, he realized that winning, losing and teamwork are all part of the game.

The Biography of Jules Kounde teaches us one thing. That the secret of being a successful footballer is to have a dogged mentality. Jules learned that from childhood experience.

Thank you for staying with us on the Life story of one of la République’s most promising soccer jewels. At Lifebogger, we always strive for accuracy and fairness while delivering your favorite Històries futbolístiques franceses.

Kindly alert us in via our contact page if you spot something that doesn’t look nice in our Bio on Jules Kounde.

Otherwise, tell us about your perception of the footballer in our comment section. For a quick summary of Kounde’s memoir, use our Wiki table.