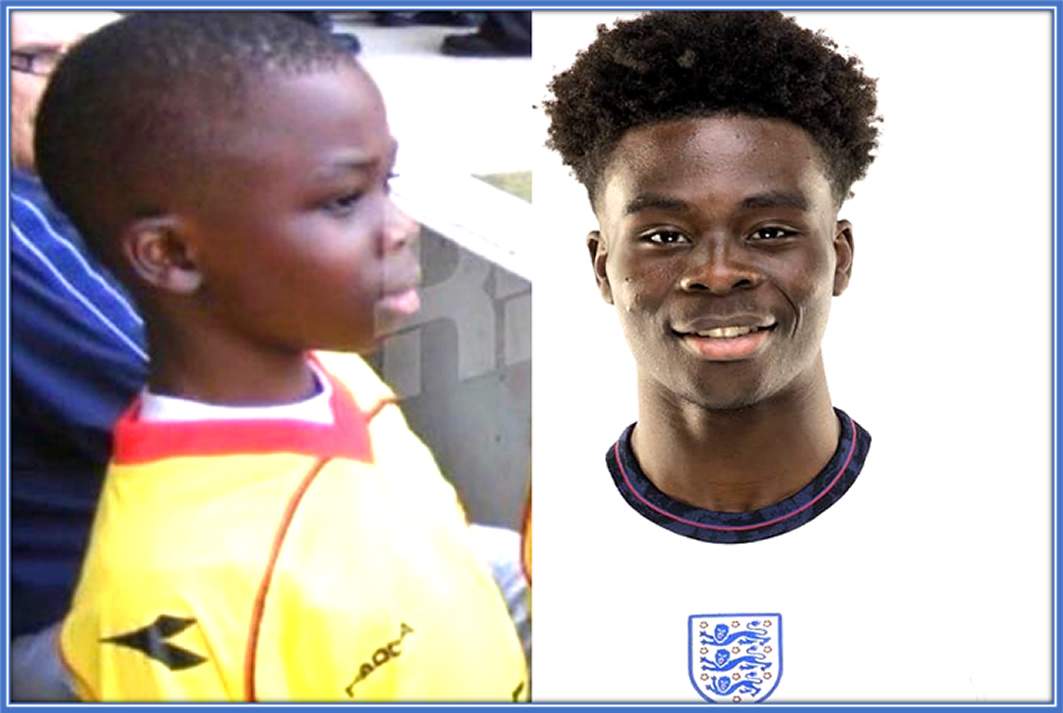 In a nutshell, we give you the history of a Football Genius best known by the nickname “Sakinho“. It begins from his early days to when he became famous with the Gunners.

To give you a taste of the engaging nature of Bukayo Saka’s Biography, here is a pictorial summary of his life journey. Without a doubt, the 2022 FIFA World Cup star has come a long way in his amazing life journey.

Yes, everyone sees him as that baby-face-looking winger with great footballing prospects. However, not many football fans have read a detailed version of Bukayo Saka’s Biography, which is quite interesting. Now, without further ado, let’s begin.

For Biography starters, Bukayo Saka was born on the 5th day of September 2001 to his Mother, Adenike Saka and Father, Yomi Saka in the city of London, United Kingdom.

Now, let’s tell you a bit about Bukayo Saka family background. Our findings reveal that Bukayo Saka’s grandfather studied in the United Kingdom. Also, his father (Yomi Saka) was born in the UK.

Bukayo Saka’s maternal grandfather was a very successful businessman who lived in one of the wealthiest areas in Lagos.

Upon his birth, his parents named him “Bukayo“, which is a unisex name that means “Adds to happiness”.

Bukayo is a name frequently used by the Yoruba tribe of southwest Nigeria. This, by implication, means that Bukayo Saka has his family origin from the Yoruba ethnic group of Nigeria.

Saka grew up in the UK capital city of London in an upper-middle-class family background.

Just like most Nigerians in London, Bukayo Saka’s family members were passionate about football.

It was their love for football and the unquenching desire to uplift their standard of living that led to the consideration of Bukayo having football education in London.

Having football-loving parents who supported Arsenal, it is only natural for young Bukayo to focus his mind on making it to the club academy.

It was Bukayo Saka’s dad who took the sole responsibility to ensure his son stay grounded and humble in his quest to secure a successful academy trial. In the words of Bukayo;

‘My dad was a massive inspiration for me. From when I was young, he always kept me grounded’

The application for Arsenal football academy was only available for truly talented footballers. Because his parents knew Bukayo had what it took, they didn’t hesitate to apply.

Thankfully, Arsenal academy called, and he proved his worth, passing their trials. At this time, the pride of his parents and family members knew no bounds.

Saka started his career with Arsenal‘s Hale End academy wasn’t that easy as it was filled with lots of sacrifices from both him and his parents. In his words;

This struggle provided Saka with lots of motivation, which helped him to work hard all the time and make sure he gave his best. Just like his teammates, Saka picked an idol.

While others went with Thierry Henry, Dennis Bergkamp, etc, he picked former Swedish and Arsenal legend Freddie Ljungberg, who was already a youth coach at the club.

As an Under-15 academy player, Freddie Ljungberg gave Bukayo Saka the best piece of advice.

He helped Saka to remain humble and to work extra hard as he believed the little boy was in no time going to be a top player.

Everything Freddie Ljungberg predicted about him came to pass. As Saka turned 17 years old, he was given a professional contract by Arsenal and promoted to the under-23 side.

Also, after a series of impressive performances, Saka was also called into the club’s senior team.

While with the senior team, he began to look for an opportunity in a competitive game to ignite his career and fight off competition.

Speaking of competition, displacing Alex Iwobi and Aaron Ramsey was more of a bigger challenge than his fellow academy mate Reiss Nelson.

The much-awaited turning point first came in the 2018/2019 Europa League Final, where Saka first left his mark with an impressive performance.

The end of the 2018/2019 season saw both Aaron Ramsey and Alex Iwobi leaving Arsenal for Juve and Everton, respectively.

This gave Bukayo the room to have lesser competition, with only one person in his cadre to compete for the left-wing position.

On 19 September 2019 saw, Bukayo Saka had an edge in the rivalry between him and Reiss Nelson.

Did you know?… On that day, he didn’t only score, he also provided two lovely assists as Arsenal won 3-0 against Eintracht Frankfurt in their opening group game of the 2019–20 UEFA Europa League. Below is a piece of video evidence.

When Bukayo Saka fulfilled his childhood dream of scoring his first Arsenal goal, he gave his dad a quick FaceTime Call.

“I couldn’t speak to him because the coaches wanted me to get in the ice bath in order to recover quickly after the game. We just put our thumbs up to each other,” He said.

Rather than crumble with an ordinary start, the left-winger went from strength to strength.

At 18 years and 125 days old, Saka became the youngest Arsenal senior player starter in  Premier League history to start a Man Utd vs Arsenal clash. He also amazed fans in the match by displacing Ashley Young.

As at the time of writing, Bukayo Saka is seen by most fans as the next beautiful promise to the Arsenal left-wing generation after Freddie Ljungberg. The rest, as they say, is now history.

Who is Bukayo Saka’s Girlfriend?

To be able to withstand the huge demands of English football, one thing is certain. Saka is already successful. Thanks to his success, most fans have enquired if Bukayo Saka has a Girlfriend or wife.

Yes! his cute baby-face looks, coupled with his style of play, would surely place him high for a girl’s boyfriend.

After several investigations, It appears Bukayo Saka is single (at the time of writing).

We know about the un-forgiven nature of top-flight English football. Saka must have preferred to focus on his career rather than looking for a girlfriend. Or someone to be his wife – at his young age.

At this moment, we can say that Saka has made a conscious effort to avoid any spotlight on his private life.

This fact makes it difficult for bloggers like us to get information about his love life and dating history. However, it is still possible that he might have a girlfriend. But prefer not to make it public, at least for now.

Getting to know Bukayo Saka Personal Life facts would help you get a better picture of his personality blend away from football affairs.

Getting to meet him, you’ll realize Bukayo Saka lives and applies a methodical approach to living an organized life.

Also, he is a very friendly and down-to-earth person who gets open to fans a lot. While in training, he pays attention to the smallest of details and ensures that nothing is left to chance.

Back in Nigeria and even in the United Kingdom, Bukayo Saka’s friends and countrymen see him as a national treasure. As someone that should be protected at all costs. See the video below.

Saka is proud of his ancestry and Nigerian roots both in good and bad times. As the breadwinner, he is glad to have forged his family’s own path toward financial independence all thanks to FOOTBALL.

His mum, dad, brothers, sisters, uncle, aunt etc, are presently reaping the benefits. Of having their very own at the helms of English football affairs.

At the moment, all of his family members and relatives have all made a conscious choice not to seek public recognition despite the numerous ways of connecting to social media.

Practicality on the pitch and pleasure off it are two different worlds for Bukayo Saka. As far as his lifestyle is concerned.

Although he believes making money in football is necessary, but his strong grounding has helped him to keep his finances in check and organized.

As at the time of writing, Bukayo Saka isn’t allowed to live large. For example, a lifestyle easily noticeable by a hand full of pretty expensive cars, mansions, etc.

In the modern football world, there are lots of flash cars. And lots of social media posts showcasing wealth and expensive lifestyles of footballers. We can say that Bukayo Saka is a refreshing antidote to living large.

He wasn’t the only Nigerians at the Academy: Arsenal FC Academy is fast becoming home to many players of Nigerian descent.

Recently from the time of writing, the academy offered scholarship deals. To four promising talents with Nigerian roots.

As observed below, his Instagram caption reads “God’s Child” and this caption is similar to that of his teammate Joe Willock. For us, there is a high possibility that Bukayo Saka’s religion is Christianity.

Thanks for reading LifeBogger’s version of Bukayo Saka Biography Facts. We strive for accuracy and fairness in our quest to deliver you United Kingdom Soccer Stories. Bukayo Saka’s Bio is contained in our English Football Stories archive.

Asides from the article of the 2022 FIFA World Cup star, we have other interesting English Soccer stories that’ll interest you. Two of such includes the Biographies of Kalvin Phillips and Emile Smith Rowe.

Good to read, informative and interesting. In the paragraph “Upon his birth” did you spell his name incorrectly – Busayo instead of Bukayo?