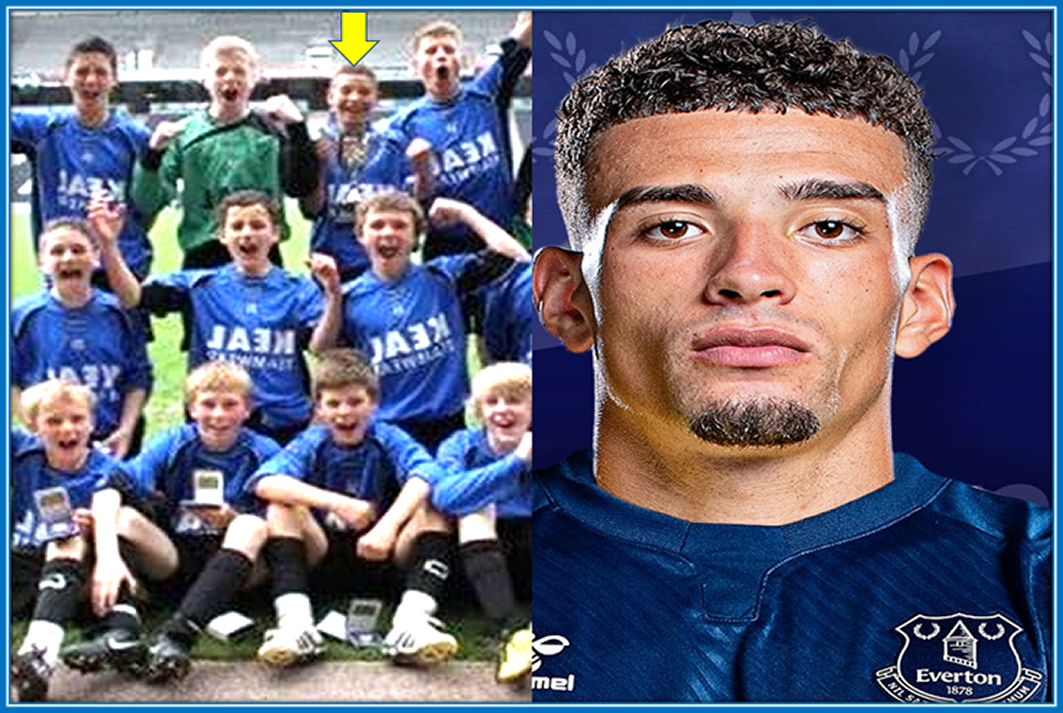 In simple terms, we present to you his life journey, from his early days, to when he became famous in the game.

To whet your autobiography appetite, here is the footballer’s boyhood to adult gallery — a perfect summary of Ben Godfrey’s Bio.

Everyone knows he is an English Defender with a solid mentality. Again, nearly everyone knows his contract of £25 million with Everton in the 2020 transfer is one of the biggest deals in the Canaries’ history.

Despite this accolade, we found a knowledge gap in Godfrey’s story. The truth is, not many football fans know Godfrey’s Life Story Biography, which is quite interesting. Without much ado, let’s begin.

For Biography starters, he bears the real names Benjamin Matthew Godfrey. Ben is just a nickname.

The English footballer was born on the 15th day of January 1998 to his parents, Mr and Mrs Alex Godfrey, in the city of York, North Yorkshire, England.

Ben Godfrey appears to be the only child of his Mum and a young/handsome Dad, whom we have pictured here.

Apparently, the rising centre-back spent most of his childhood days idolizing Thierry Henry. Yes! He’s got a profound interest in playing football since he was a little boy.

Thanks to the support of his athletic father, Ben’s delight in soccer never ended as a mere hobby.

Coming from an athletic household, it is only natural that his sports-loving parents had instilled in him a love for the beautiful game. Perhaps you didn’t know that athleticism runs pretty deep in Godfrey’s family genetics.

In fact, his father, Alex Godfrey, was a former professional rugby league player.

With his enormous earnings during his career days, the big man ensured that little Ben, his wife, and his extended household enjoyed a luxurious lifestyle.

The English national of mixed-race Ethnicity comes from the largest non-metropolitan county (North Yorkshire) in England.

Interestingly, Godfrey’s hometown is about 328.1 km far from London, where England’s most revered icon (David Beckham) was born.

Do you know?… His place of Origin is a pleasant spot for tourism. In fact, North Yorkshire is known for its Yorkshire Dales and North York Moors, which are among England’s best destinations.

Growing up in Yorkshire, the future tackler enjoyed playing soccer with his peers after school. Back then, Godfrey played as a striker until he was 12.

Thankfully, he realised he wasn’t cut out for an attacking role. Hence, he focused on making an impact from the rear.

While evolving as a teenager, Godfrey attended Archbishop Holgate’s School, which is a co-educational Church with academic status.

There, he partook in high school soccer and gained recognition from many sponsors and coaches.

With his undeniable talent, Godfrey captained the York and District U-13 squad into winning the 2011 English Schools’ FA Inter-Association Trophy.

After showcasing a great deal of proficiency in the game, several scouts set out to discuss his future with his parents.

Thankfully, Alex Godfrey and his wife reached a reasonable agreement with York City FC. Hence, they had their son enter the Minstermen youth team in 2011.

Sadly, Ben Godfrey’s early career days had lots of ups and downs. First, he complained to his mom and dad about how the system of York City was not favourable to him.

Then, his father had to go through serious stress to have him join Middlesbrough towards the end of 2011.

It was not too long before his mother suggested that their son should take some trials with other teams. Consenting to her suggestion, the defender’s dad had him tested at both Leeds United and Sheffield Wednesday.

Sadly, Godfrey was rejected by both clubs when he was only 15 years old. The entire ordeal broke him and almost made him give up on football.

However, his hope for a better future in soccer came to life as he gained a scholarship to join the U-15 team of York afterwards.

It was not too long before the tackler became York’s U-18 captain after making his professional debut at 17.

In no distant time, Ben Godfrey’s family celebrated his grand success as he passed Norwich city trials, joining them for a three-and-a-half-year contract in 2016.

With the Canaries, our boy helped the team to win the EFL Championship trophy.

While he featured for the Canaries, the defender had a one-year loan spell with the Shrewsbury Town in League One.

With his expertise as a central defender, Godfrey attracted the attention of Everton’s coach, Carlo Ancelotti.

Interestingly, Ancelotti contacted Norwich City to discuss a possible transfer of the tackler. As destiny would have, Ben Godfrey sealed a £25 million deal with Everton in 2020.

There, he formed a formidable partnership with Michael Keane (at Defence) and Anthony Gordon (at midfield). The rest, as they say of his Biography, is now history.

About Ben Godfrey’s Girlfriend and Wife to be:

There are many fans who would agree that the central defender ought not to be single after achieving so much success.

The is no denying the fact that Ben’s handsome looks, coupled with his style of play would attract ladies who will deem themselves wife materials.

At Lifebogger, we believe (on the high possibility) that Ben Godfrey already has a woman in his life but is waiting for the right moment to unveil her.

Certainly, we are sure that he would soon (or already have) introduce his girlfriend to his parents while he sought after their blessings in no distant time.

What makes the Yorkshire-born footballer thick? First and foremost, he’s got a blend of the Capricorn zodiac trait. Apparently, Godfrey is intelligent, disciplined, and also loyal to a just course. His humility precedes his reputation.

Of course, he is a fans favourite because of his personality on and off the pitch. There were times when Godfrey would sit in an ornamental scenery to enjoy the refreshing air of the surroundings. For the records, he’s got a cute smile as well.

An analysis of Everton’s 2021 payroll reveals that Ben Godfrey earned a little lower than Theo Walcott. With his annual salary of £4 million (January 2021 Stats), the prolific tackler lives a luxurious lifestyle.

He’s got a beautiful mansion and some exotic cars. Also, with all his years of experience as a soccer star, we have estimated Ben Godfrey’s Net Worth at about £3.5 million as of February 2021.

To the formidable athlete, nothing is better than going home to family and eating the good old food of his Mum.

Godfrey cherishes the memories, and time he spends with his parents. In this section, we bring you details about every member of his household.

No doubt, his dad gave him the greatest gift he ever wished for by believing in him. The centre-back’s father is Alex Godfrey, the former Rugby player whose son has carried on to live the family’s sporting dreams.

When Godfrey’s journey to stardom became extremely difficult, he had Alex on the lookout for him.

There is no word that can define the unconditional love that his mom showered him since he was a little boy.

Surprisingly, Godfrey has not mentioned his mother’s name during any of his interviews. However, her words of encouragement have seen him through trying times. We suspect Ben Godfrey’s mum is likely of white ethnicity.

As I write this Bio, there has been no information pointing to his brothers or sisters. It appears Ben Godfrey has no siblings. However, he has made a tonne of friends whom he considers his brothers.

Moving on to his ancestry, there has been no information about his grandfather and grandmother.

Of course, his entire family celebrates his success in the fierce world of football. Notwithstanding, nothing has been said about his uncles, aunts, and distant relatives.

To wrap up the tackler’s Biography, here are a few facts about him that would help you get a complete knowledge of his Life Story.

To clarify one important fact, he is not related to the British Superbike star (Ben Godfrey) who died in an accident.

Whenever his name is mentioned, there are fans who mistake him to be a relative of the motorbike pro who died at the age of 25 after a crash at Donington Park.

Salary Breakdown and Earning Per Second:

While he was featuring for Norwich, the defender often took home an annual salary of £489,000.

However, his deal with The Toffees changed his earnings to about £4 million as of 2021. Hence, we present you with a breakdown of Ben Godfrey’s Salary at the time of writing this Life Story.

Research shows that an average English man will have to work for 10 and a half years to earn what Godfrey receives in a month. Finally, we’ve strategically put up an analysis of his salary as the clock ticks.

Since you started viewing Ben Godfrey’s Bio, this is what he has earned with Everton.

Why he chose the Toffees:

After joining Mason Holgate at Everton, Godfrey disclosed the man who has helped him make such a grand decision.

According to HITC, the words of Everton’s Tom Davies were the biggest encouragement that made Ben take the big step of joining the Toffeemen. In an interview, the Godfrey once said;

“As soon as I heard the whispers about the Toffees, that was it for me. Instantly, I got the vibe that Davies really enjoys his soccer here. Also, he made me realise it would be easy to settle in.”

Yes! Ben Godfrey is also big on inking. Apparently, he does not need the approval of his father and mother before he tattoos his skin in beautiful designs, which speak about his life history.

Although his ratings show a greater prospect than that of Emile Smith, whom FIFA owes a lot. Thou both youngsters still have a long way to go.

From his FIFA Stats, he has to work on his ball control, positioning, and attacking flair to become more influential on the pitch.

Sometimes, we have to get knocked down lower than we have ever been to stand back up taller than we ever were. It was because Godfrey understood this fact that he didn’t give up on his dream when different clubs rejected him.

It behoves us to commend his parents (especially his sports-loving father, Alex) for trusting in his career decision. Indeed, their resolve to allow Godfrey to play soccer has already made their entire family proud.

Lifebogger strives for fairness and accuracy while creating the Biography of Ben Godfrey. Kindly contact us if you see something you don’t like about this Memoir.

More so, place a comment to let us know what you think about the future Three Lions star. To get a quick summary of his Bio, use our wiki table.