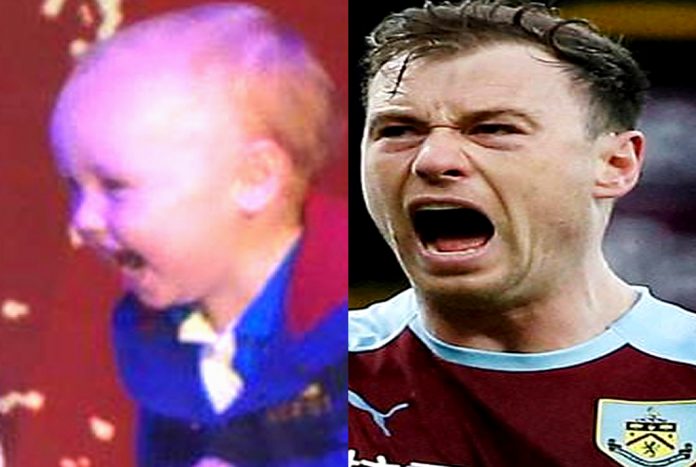 LifeBogger presents the Full Story of a Football Genius with the name “Barney“.

Our Ashley Barnes Childhood Story Plus Untold Biography Facts brings you a full account of notable events from his childhood time to date.

Yes, everyone sees Barnes as that striker who has created a burgeoning reputation for winding up opponents and scoring great goals.

However, only a few consider Ashley Barnes’ biography, which is quite interesting. Now without further ado, let’s begin.

Starting off, everyone knows him as Ashley Barnes, BUT his full names are Ashley Luke Barnes. Barnes was born on the 30th day of October 1989 in the city of Bath, United Kingdom. He was born to English parents with non-British Family roots.

Barnes has his Family origin from Austria. Did you know?… His paternal grandmother is from Klagenfurt, a city in Southern Austria.

Ashley Barnes grew up in Bath, a large city in England known for its Roman-built baths and beautiful Roman archaeological sites.

This could possibly explain the reason why Ashley Barnes’ paternal grandmother left her country of Austria to settle in the English city.

He wasn’t interested in archaeological sightseeing, just football. Ashley Barnes parents were like most families in Bath who were able to afford the newest collections of toys for their son, including a football.

Having a football-loving parent, it was only natural for Barnes to fall in love with the beautiful game. This also includes him dreaming of becoming a professional footballer.

Back then, his parents enrolled him in Writhlington School, which is located in the village of Dunkerton near Bath, England. At school, Ashley picked up an interest in playing competitive football.

Away from school, Barnes continued to play football with confidence, forming the habit of overstepping his mark and doing things out of the blue with a soccer ball. This he did to the amazement of his friends and family members.

Ashley Barnes aimed high as a child and his determination to become a professional footballer wasn’t a passing fantasy.

Putting himself into work, he decided to travel to Chelwood Drive located in Somerset county to attend football trials with Bath Arsenal Juniors.

While still a child, Barnes saw himself passing Bath Arsenal Junior’s academy trials and successfully enrolling into the club.

Bath Arsenal Juniors Football, although not affiliated to the Gunners, is a football club that has teams for children of all youth ages.

Together, both lads had their positive times before Sinclair left to join Bristol Rovers at the age of nine.

Early on, all Ashley wanted was to reach the top of English football. In his words:

“Every day I woke up, I had to pinch myself. The dream to become pro was amazing and it’s was dreamt of every day when I was younger.”

Ashley Barnes began his senior career as a prolific goalscorer with Paulton Rovers, a local club located in the English Southern League. Young Barnes pictured below was in one of the lowest leagues in the English Football League System.

This feat marked his journey from the Southern League to the very top of the English League System- The Premier League.

Each one of these loan spells was marked with having a limited time to impress his managers.

Did you know?… He excelled and broke through the lowest part of the English league system via Loan spells to the very top, all in the name of becoming a first-choice striker.

Ashley Barnes got what he wanted, that dream to become a first-choice striker for a club that would offer him a permanent deal.

Everything actually happened in the 2011–12 season when he helped Brighton return to the Championship, finishing as the leading goal scorer with 14 goals in all competition.

On 10 January 2014, Barnes’ performance saw him getting snapped up by Burnley for an undisclosed fee.

In just four years, precisely on the 3rd of March 2018, he wrote himself into the club’s history books by when he became the club’s leading scorer in the EPL since it was formed in 1992.

As at the time of writing, Barnes has earned a burgeoning reputation for winding up both big or small opponents in his goals.

He alongside Chris Wood, Dwight McNeil has made Burnley a Big club, a feat that has attracted Big Names – eg, the likes of Maxwel Cornet to become a Clarets in 2021.

Though he might not be at the level of Sergio Aguero, but for Burney fans, the memories of the precious number 10 will always be remembered. The rest, as they say, is now history.

Behind the successful English footballer, there exists a glamorous girlfriend named Zan Barnes whom little is known about.

Both Barnes and Zan are married and have been together for a long time. Together, they have a son named Flynn who was born in 2011.

Flynn might be around 2 years at the time he wore that Brighton jersey and 8 years as at the time of writing this article.

Getting to know Ashley Barnes’ personal life would help you get a complete picture of him. TheTimes made us understand that Barnes is a down-to-earth figure who is very kind to his teammates.

Ash-Cabs, as they nicknamed him, is a people’s carrier and leader who derives pleasure in helping his teammates with transportation.

It is not a typical Premier League scene to see a top footballer like Barnes doing a cab duty. Barnes, however, often rolls into Burnley’s car park at the club’s training ground with some of his club teammates in his bus. Here’s an account of the story by a fan;

When the passenger doors slideD across, I saw seven footballers emerged, one by one. Then the driver’s door opens and out gets Ashley Barnes, their leading goalscorer and designated driver.

At first, Barnes drove a smart car, but he later upgraded to a minibus as observed below. He did that because of his teammates.

This is the reason why the spiritual leader of Burnley FC is also nicknamed “Ash-Cabs”. Burnley footballers gather at a pickup point in Cheshire most mornings before their captain and No10 arrive to pick them.

Barnes has family members living mostly in Britain and Austria. While everyone expects that his immediate family would all be Burnley fans, the opposite is the case. Ashley Barnes’ son Flynn is a massive Man City fan.

Burnley striker Ashley Barnes once claimed that he was promised an extra incentive by Jurgen Klopp via SMS is he scores against Manchester City thereby spoiling their title hopes.

Thankfully, Barnes didn’t do anything that tilted the premier league title in Liverpool’s direction. If he does, he would have had one very unhappy boy waiting for him to come back home for a lashing.

For someone who once drove a Smart car into training every day, but upgraded that to a minibus, it is easy to guess that Barnes lives a simple life.

In the modern football world of exotic cars and social media inclusion, Barnes, like Ngolo Kante, is a refreshing antidote.

Crunching that into earnings per time, it means Ashley Barnes earns £5,632 per day and £235 per hour, £3.91 per minute, and £0.07 per second. Despite earning this much, Barnes is religious about managing his monies.

GOT BOOKED FOR KISSING ON THE PITCH: This event happened on the 13th of April, 2019.

It was the day Ashley Barnes got booked in what football fans refer to as the “most strangest of situations“. See what he did below.

Did you know?… The referee booked him for kissing a defender named Joe Bennett during a match against Cardiff City.

Both players had an altercation in the first-half stoppage time which almost led to a fight. Instead of raising his head towards Bennett, Barnes decided to show his affection by giving him a kiss.

On 9 March 2013, Barnes received a red card in stoppage time against Bolton in what was also regarded as a very strange tackle. He had a successful attempt at tripping up the match referee.

This was considered a serious offence by the English FA, who handed him a seven-match ban.

To the excitement of his fans, Barnes returned from the ban on 20 April, scoring two goals in a 6–1 win over Blackpool. He was named the man of the match.

THE TOUGHEST DEFENDER HE HAS EVER COME UP AGAINST:

It’s no other person than Virgil van Dijk, the only defender he claimed has remained oblivious to all of his tricks.

“Virgil van Dijk is by far the toughest one I have come up against in my career. He is the only one I haven’t got the edge over yet. He is way too strong and powerful. Virgil is a machine,” said Barnes.

FACT CHECK: Thanks for reading our Ashley Barnes Childhood Story plus Untold Biography Facts. At LifeBogger, we strive for accuracy and fairness.