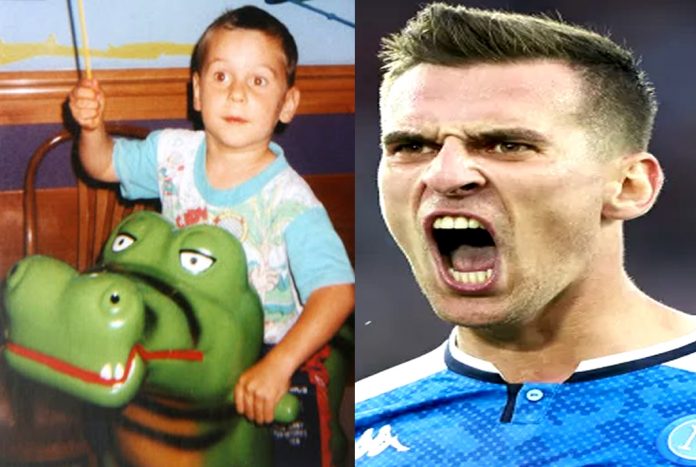 Our Biography of Arkadiusz Milik tells you Facts about his Childhood Story, Early Life, Family, Parents, Girlfriend/Wife to be, Lifestyle, Net Worth and Personal Life.

In a nutshell, we portray the history of the Polish professional footballer. Lifebogger begins from his early days, to when he became famous.

To whet your autobiography appetite on the engaging nature of Arkadiusz Milik’s Biography, we give you this gallery of his Early Life and Rise. It is no doubt a perfect summary of the Polish striker’s Life Story.

Oh Yes! everyone knows he scores and creates goals. This has made him a darling to managers with the latest being André Villas-Boas in his Marseille’s 2021 winter transfer interest.

Despite the accolade, only a few know his Life Story – which is quite interesting. Now without further ado, let’s begin.

For Biography starters, he bears the nickname “Aro.“ Arkadiusz Krystian “Arek” Milik was born on the 28th day of February 1994 in the city of Tychy in Silesia, Poland. He is the second of two children born of the union between his little known mother and father.

The Polish national who is of white ethnicity with European family origins was raised at his birth city in Tychy where he grew up alongside his only brother and sibling called – Lukasz Milik.

Growing up at Block “N” neighbourhood in Tychy, young Milik was three years old when he began playing football with friends and neighbours on a square around the corner of his parental home.

It suffices to note that life was good for the young football enthusiast who had a father figure in his life up until his 5th year birthday.

Milik’s father left the family not long after the football prodigy was aged 6 and thus began his plummet to a wayward lifestyle.

The tender aged boy began keeping the company of bad boys. They taught Arkadiusz Milik the act of smoking, shoplifting and engage in other petty thievery and return home very late in the night.

Disturbed by the sharp change in the direction of her son’s moral compass, Milik’s mom sought the help of her neighbour – Slawek “Moki” Mogilan to help bring Milik back to his senses.

Moki, who was then a football player of Rozwój Katowice football club with coaching ambitions, took Milik under his guidance as well as became a friend and even father to the young lad.

It was Moki who also saw Milik’s prospects in football and went on to facilitate his training or career buildup in the youth systems of Rozwój Katowice.

While at Rozwój Katowice youth systems, Milik slowly rose through the ranks and stood out among other players for his strong left-footed ability on the ball.

In addition, he received much passes and assists because his teammates trusted him – more than any other player – to do something very useful with the ball. 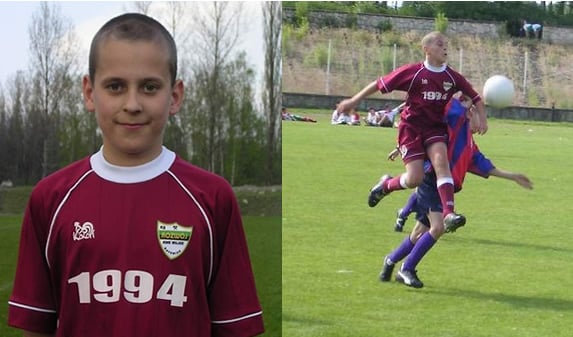 Milik was eventually introduced to Rozwój Katowice reserve team during the 2009–10 season and not long after, made a spectacular III Liga debut for the club by contributing two goals to their 4–0 victory over KS Krasiejów.

At the end of the season, Milik had big clubs seeking his signature including Tottenham and Reading. However, he opted to play for Polish Club Górnik Zabrze where he became a consistent goal scorer.

It was with rising reputation and fine performances that Milik earned a move to Bundesliga powerhouse Bayer Leverkusen in 2012.

However, he became fraught with the challenge of lesser playing opportunities at the German club which eventually loaned him to FC Augsburg.

Although FC Augsburg was a struggling team at the time of Milik’s arrival, he was nonetheless happy at the club because it satisfied his need for more playtime.

Milik repaid FC Augsburg’s kindness by helping the club finish the 2013–2014 season in 8th position, a feat that had not been recorded by the German side for a very long time.

In 2014, Bayer Leverkusen loaned Milik to Ajax where he greatly impressed and made the Dutch giants offer him a permanent deal. At the peak of his success at Ajax, Milik became one of the top goalscorers in Eredivisie before he joined Italian club – Napoli.

Fast forward to the time of writing Milik is a versatile and well-rounded left-footed forward that is indispensable to Napoli and his polish national team.

What more? he keeps getting better by the year and has earned a comparison to his great compatriot – Robert Lewandowski. The rest as they is history.

Arkadiusz Milik Girlfriend/Wife to be:

Away from Milik’s engaging career life, he invests quality time in his enviable love life. This is very much evident in the playmaker’s 7 years of happy relationship with his girlfriend Jessica Ziolek.

The lovebirds who met and began dating in 2013 have been the cynosure of eyes in Italian football for reasons not far from their perfect match.

Jessica is a model and fashion blogger with a great following on Instagram. Like her boyfriend, Jessica is not known to have had son(s) or daughter(s) out of wedlock.

The lovebirds are very much loved by Italian fans who can’t wait to see them become husband and wife in the nearest future.

It takes a loving and supportive family to raise a football genius and Milik is fortunate to have been blessed by one. We bring you facts about the playmaker’s family background as well as outline facts about his ancestry.

Milik remembers nothing about his father because he was still very young when the little known dad left home.

However, Milik loved ones recall that the one-time father figure once took him to a watch a Falcon Tychy match when he was aged one. The playmaker was also informed that his dad had drinking problems which catalyzed his exit from the family.

Although not much is known about Milik’s mom, she is credited for handing him over to the care of Slawek “Moki” Mogilan who curbed his excesses and guided him through an honourable path in football.

It goes without saying that the forward shared a close bond with his mom as she played supportive roles during his development at Rozwój Katowice.

Arkadiusz Milik has no sister but an older brother identified as Lukasz Milik. Lukasz was a supporting pillar to Milik during his early as he helped watched over his interests.

The older brother is – at the time of writing – an employee of Górnik Zabrze where he performs coaching functions and inspires youngsters to be like Milik.

Away from Milik’s immediate family life, not much is known about his maternal grandparents as well as paternal grandfather and grandmother.

Similarly, there are no records of the playmakers’ uncles, aunts and cousins, while his nieces and nephews are yet to be made known at the time of writing this biography.

It’s no gainsay that Arkadiusz Milik is the perfect embodiment of Pisces as traits of his personality mirror the persona exhibited by spectacular individuals who are guided by the Zodiac sign.

He is emotionally in tune, motivated, resilient, nice and has no problems with revealing details about his private and personal life.

Speaks of Milik’s interests and hobbies, he loves travelling, driving speed boats and swimming. Also, keeping up with basketball games and spending time with his friends and family.

Arkadiusz Milik’s estimated net worth of $3.8 million Million dollars. As well as his huge salary and wages – at the time of writing – speaks well of things.

Like the lucrative potentials of football. And it explains why top earners of the sport spend big to live a luxurious lifestyle.

Assets that scream luxury around the tactical striker include his luxury mansion in Naples. Also, Campania as well as an exotic fleet of cars produced by brands like Audi, Mercedes among others.

Before we call it a wrap on Arkadiusz Milik’s childhood story, here are lesser-known facts. They are tailored to help you know more about him.

Milik’s religion is yet unknown at the time of writing. He hasn’t given pointing indicators to his faith either through interviews or via his three most popular social media handles.

Tattoos are the least of Milik’s worries at the time of writing. He is rather focused on improving his physique through regular exercise.

Indeed, a muscular build on his fair height of 1.86 m would make defenders scared of tackling him.

Do you know that Arkadiusz Milik has a restaurant called Food & Ball? it is located at in the Libero shopping mall in Katowice, Poland.

The top-rated restaurant does not only introduce patrons to the world of Culinary passion but gives them sporting emotions.