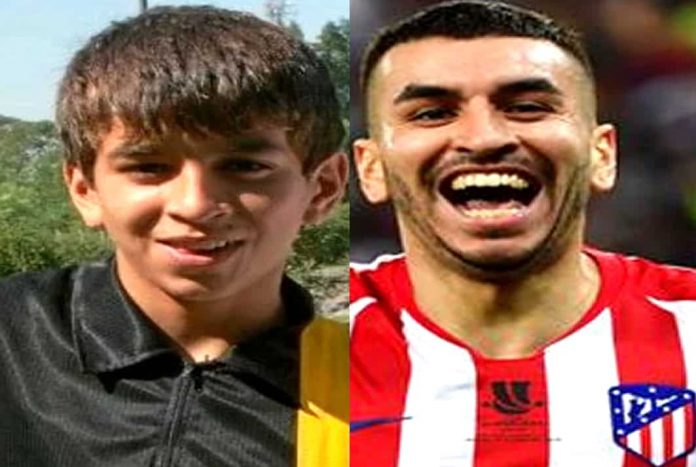 Our Biography of Angel Correa tells you Facts about his Childhood story, Early Life. We’ll tell you about Angel Correa’s Parents, Family, Wife, Children, Lifestyle, Net worth and his Personal life.

In the nutshell, this is a story of the Argentine footballer’s journey. We begin from his boyhood days, to when he became famous.

To whet your autobiography appetite, here is his childhood to adult gallery. Without a doubt, this brings us a perfect introduction to Angel Correa’s Biography.

Yes, everyone knows about his attacking positional role- that good skill, pace and low centre of gravity.

However, not many football fans have read this version of Angel Correa’s Biography, which is quite interesting. Now, without further ado, let’s begin.

For Biography starters, he bears the nickname “Angelito“.

Ángel Martín Correa Martínez was born on the 9th day of March 1995 in the city of Rosario in Argentina where stars like Lionel Messi, Mauro Icardi and Angel Di Maria also hail from.

Correa is one among many children born to his little known mother and to his father whom little is known about. Below is a rare photo of one of Angel Correa’s parents- his mum.

Notwithstanding, it is evident that he is an Argentine national of mixed ethnicity with little known family origins.

Did you know that young Correa was raised in the Las Flores neighbourhood of Rosario where he grew up alongside siblings whom not much is known about?

Growing up in a lower-class family background in the Los Flores neighbourhood, Correa lived an early life of abject poverty in the neighbourhood where there was a high possibility that he could either end up as a drug addict or convict.

However, Correa was able to find an escape from the harsh realities surrounding him by getting immersed in street football and having career-building engagements with his then local boyhood clubs – Alianza sport and Tiro.

By the time Correa was aged 12, he was hit by an even harsher reality when he lost his supportive Dad followed by two brothers.

Although the pain was too much for Correa to bear, he did what he knew how to do best; finding solace in the way of football.

“Whenever I step into the pitch of play, I forget all of the sad realities that have befallen me and I just enjoy playing,”

Fortunately, Correa was not just good at finding escape with football but had excellent skills on the ball, a development which saw to his enrollment into the youth systems of San Lorenzo in 2007 after he was discovered by one of the club’s scouts.

It was with the Argentine side that Correa spent 4 years honing his skill set and training for a career that would take him beyond the continent of South America.

His rise through the club’s ranks was meteoric, culminating in 2013 when he made his professional debut for the club nicknamed the Ciclón.

A year later, Correa agreed to a transfer deal with the then La Liga holders Atlético Madrid. Sadly it was discovered that he had a heart tumour while undertaking medicals to complete his move to the Spanish side.

Yes, the tumour was successfully removed via surgery. It came at a cost that saw Correa miss out on the semi-final and final of the Copa Libertadores with San Lorenzo.

Those were matches that he had always hoped of playing because he did much to help his team get to the final stages.

When Correa eventually made full recovery, he officially joined Atlético Madrid on 13th December 2014 and worked his way up to become one of the club’s most reliable forwards in just a few years.

He is not also found lacking in his international career with Argentine’s national team where he is often compared to his compatriot Sergio Agüero even when his playing style is more similar to Carlos Tevez. The rest, as they say, is history.

Moving on to Correa’s love life, there is not much known about the forwards dating history because he hasn’t revealed much about happenings in that department.

As such, it cannot be conclusively stated that whether he had girlfriends in time past nor has a wife at the time of writing.

However, according to WTFoot, there exists a mystery partner named Sabrina Di Marzo who is rumoured to be Angel Correa Girlfriend and mother of his daughter.

As stated earlier, Angel is a parent to a lovely daughter Lolita who is born to him by either his girlfriend or wife.

His Instagram account is studded by photos of Lolita, who is growing really fast and happy. What more? the beautiful girl loves spending time with her dad who also enjoys her company.

It is said that geniuses leave home to seek fortune and return home to share it with their family.

The same can be said of Angel Correa, who is his family breadwinner. We bring you facts about Correa’s family members beginning with his parents.

Correa lost his little known dad to the cold hands of death when he was only aged 12.

Though the forward has not revealed what caused his dad’s death, he credits the deceased for giving him his happiest childhood memory by accompanying him to training.

Do you know that Correa’s little known mom is one of the numerous caring moms who proved that parenting is all about sacrifice? She helped raise the forward and his siblings after her husband died.

In fact, Correa’s mom doesn’t eat until she has ensured that her children had gotten their fill.

She is particularly proud of Correa who assumed the responsibilities of a breadwinner from the age of 12 by giving his Per Diem for the family’s upkeep.

The forward has numerous siblings, numbering 10. He lost two alongside his dad very long ago, while not much is known about the rest who are believed to be boys.

This is due to the fact that Correa has always talked about providing for his mother and brothers without mentioning sisters during interviews. Below is the closest unit of Angel Correa’s family we’ve found.

Away from Angel Correa’s family life, there is not much known about his ancestry and family roots.

This is particularly as it relates to his paternal and maternal grandparents while his uncles, aunts, cousins, nieces and nephews are yet to be identified at the time of writing this bio.

Like all humans, Angel Correa’s has personality traits that define who he really is outside the pitch of play.

The traits which are shared by individual guided by Pisces Zodiac sign includes the forward’s sensitive dispositions, emotionally driven nature and spot-on intuition.

Correa who hardly reveal facts about his private and personal facts engages in a few activities that pass for his interests and hobbies.

They include playing video games, travelling and spending a good time with his family and friends.

Speak of Angel Correa’s money-making endeavours and spending habits, he earns a lot in salaries, wages, and winning bonuses for playing top-flight football while endorsements  play a vital role in the steady rise of his wealth,

Thus, the forward who has an estimated net worth of over $3.50 million at the time of writing this bio.

He has what it takes to live a luxurious lifestyle like top earners of the sport who include Cristiano Ronaldo, Neymar Jr and Paul Pogba.

To bring an end to our Angel Correa childhood story and biography, here are little known or untold facts about the forward.

As of September 2018, the Argentine’s contract with Atlético Madrid saw him netting a whopping salary of 3.5 Million Euros per year. Crunching Angel Correa’s salary into numbers, he earns the following.

Since you started viewing Angel Correa‘s Bio, this is what he has earned.

Did you know?… It will take the average worker in Europe at least 8.6 years to earn the same as Angel earns in 1 month.

Angel Correa’s parents raised him in adherence to Christianity religious belief. The footballer is a practising catholic like most people born in Rosario in Argentina.

In fact, he had an encounter with Jorge Mario Bergoglio in Argentina before he became Pope Francis.

Correa is evidently big on tattoos and has body arts on his neck, chest, arms and legs. There is no end in sight to how many more arts he can get given that there is still space for more.

Angel Correa’s overall FIFA ratings stand at over 82 at the time of writing this bio.

Although the ratings are improvements of previous years, fans can’t wait to see him attain an overall rating of 87 with a view to securing his services for FIFA career gameplay.

In this final section of Angel Correa’s Biography Facts, you’ll get to see his Wiki knowledge base. Pictured below, it helps you find information about Angelito in a concise and easy way.

FACT CHECK: Thanks for reading our Angel Correa Childhood Story Plus Untold Biography Facts. At LifeBogger, we strive for accuracy and fairness.