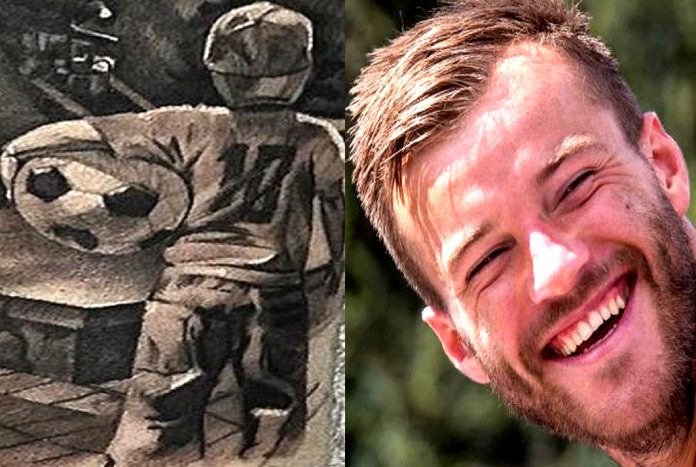 Our Biography of Andriy Yarmolenko tells you Facts about his Childhood Story, Early Life, Parents, Family, Girlfriend/wife-to-be, Lifestyle, Net Worth and Personal Life.

In a nutshell, we give you the history of a Football Genius best known by the nickname “The New Sheva”. Our story begins from Andriy Yarmolenko’s early days right to the moment when he became famous.

To give you a taste of the engaging nature of Andriy Yarmolenko’s Bio, here is a pictorial summary of his life.

Yes, everyone sees Yarmolenko as a footballer with an eye for scoring goals. However, only a few consider Andriy Yarmolenko’s Biography, which is quite interesting. Now, without further ado, let’s begin.

For Biography starters, Andriy Yarmolenko was born on the 23rd day of October 1989 to his mother, Valentyna Yarmolenko, and father, Mykola Yarmolenko in the Russian port city of Saint Petersburg.

He is the first child out of two kids born to his lovely happy-like parents pictured below.

Both of Andriy Yarmolenko’s parents are Ukrainians. They decided to have their kids in the Russian city of Saint Petersburg.

All members of Andriy Yarmolenko’s family have their origin from Kulykivka Raion, Chernihiv Oblast, Northern Ukraine. Now let’s tell you why his parents relocated to Russia.

After the marriage between his parents, Andriy’s mum was offered a lucrative job in the Russian port city of Saint Petersburg.

She decided to leave her newly married husband in Ukraine to settle in Russia. Shortly after Andriy was born in Russia, his dad relocated from Ukraine to fully join his mum.

Andriy Yarmolenko grew up in a middle-class family background where we could assume that his mum is the family breadwinner thanks to her job in Russia.

Thou at some point while little Yarmolenko was still a boy, his parents made a u-turn on their residence.

For some unknown reasons, the family moved back to their native land- the city of Chernihiv, North Ukraine at a time little Andriy was just a boy.

Football education began in Chernihiv, the city in Ukraine was where Yarmolenko grew up. Back then, Ukrainian and AC Milan legend Andriy Shevchenko was the footballer everyone idolized.

For Yarmolenko, it was about following the footsteps of his idol who as at then was playing and breaking records at Dynamo Kyiv.

As a little boy, Andriy Yarmolenko wasn’t interested in the newest collections of toys. All he wanted was a football. Having a football legend (Andriy) as his namesake, it is only natural for the little boy to fall in love with the beautiful game.

At the time of writing, the best memory of Yarmolenko’s childhood is being kept as a tattoo on his hands.

Below is an image of Andriy Yarmolenko’s tattoo which pictures him as a boy with a soccer ball gazing at a gun carriage.

Yarmolenko was the kind of child who would take the soccer ball anywhere he goes. To his parents, there was never much doubt that he was heading in the right direction, as seen in his continuous quest to overstep his marks. When he got called up for his first football trial, the joy of his parents knew no bounds.

Yunist Chernihiv a local club in his city, accepted Yarmolenko into its academy roster after a successful trial with them in the year 2002.

A very ambitious Yarmolenko who was so eager to succeed fought his way to three other youth clubs namely; Desna Chernihiv, Lokomotyv and Vidradnyi Kyiv between the years of 2002 to 2004.

In the year 2004, Yarmolenko made a decision to return to Chernihiv, the club he started his youth career because of his inability to endure the physical demands of training from the previous clubs.

He stayed with Yunist Chernihiv for an additional 2 seasons, which saw him graduating from its academy before moving to another club (Desna Chernihiv) to begin his senior career.

While at Desna Chernihiv, young Andriy began to see the possibilities of playing his football in Europe. For him, there was only one way out. That is; following the career path of his idol- Andriy Shevchenko.

Due to the huge expectations placed on trials with Dynamo Kyiv, a patient Yarmolenko decided to step down his career by joining the club’s youth team named- Dynamo-2 Kyiv. With less pressure, he worked his way into the club’s senior team.

On 11 May 2008, Yarmolenko’s dreams of debuting for the Dynamo senior team came to pass.

While used as a left and centre-forward, he went on to score 99 goals, a feat which saw him being nicknamed the “new Andriy Shevchenko / New Sheva” by journalists.

As at 2017 several top European clubs began to put pressure on the star man thanks to his qualities of good physique, shot and speed.

Borussia Dortmund prevailed among the list of top clubs begging on their knees for his signature. Yarmolenko didn’t stay at the club for long as mouth-watering offers came which he couldn’t resist.

Fast forward to On 11 July 2019, Yarmolenko currently enjoys his football at Westham FC where he has formed a formidable partnership with his teammates especially Mark Noble- the club’s spiritual leader who feeds him with passes as he cuts through the right to score goals.

Thou he might not have reached the heights set by Ukrainian legend Andriy Shevchenko, but Yarmolenko is, without doubt, a vital part of the endless production line of amazing attacking players to have come out of Ukraine. The rest, as they say, is now history.

As the saying goes; behind a successful man, there is a woman. In this case, behind every successful footballer, there is indeed a glamorous girlfriend or Wag.

As regards success, the year 2011, when Yarmolenko won the Ukrainian Premier League player of the Year, would never be forgotten.

This was the year Yarmolenko got married to his then-girlfriend who goes by name- Inna.

Did you know?… The wife of Yarmolenko is a specialist in foreign affairs and also a director of The American Charity Fund. This fact reveals that she is sound and well-educated.

Together, both husband and wife are blessed with two cute sons who go by the names Ivan and Danylo.

Ivan who is the eldest son was born on the 22nd day of May 2013. Below is a photo of both sons as they enjoy quality time at a park.

As a parent, Andriy Yarmolenko owes it to himself, the duty to laying the groundwork for his succession while his children.

It might be hard for him to deal with retirement when the time comes, hence the need to continue living his dreams through either one of his sons.

Getting to know Andriy Yarmolenko’s personal life away from the pitch of play would help you get a complete picture of his person.

Off the pitch, Yarmolenko is very friendly, eccentric, energetic and can easily adapt to all sort of energies that surround him. Fans who know him outside football would really enjoy his company.

Early on, it was about relocating to Russia to search for a better living. Today, Valentyna and Mykola pictured below have forged their own path toward financial independence through their son.

While Andriy Yarmolenko’s dad Mykola keeps away from the media, the same is not true of his wife and daughter. Below is a photo of Valentyna under the clear skies with her only daughter.

Birthday moments are happy moments for the Yarmolenko family. Below is a photo of the Ukrainian forward with his kid sister on her birthday.

His devotion to making sure his only sibling is comfortable is similar to the commitment he puts in on the pitch.

Judging from his social media handle, it appears Andriy Yarmolenko is a wise footballer who does save some money for a rainy day.

There are no signs of heavy spending and living a glamorous lifestyle as observed by a handful of pretty impressive cars and mansions.

In a match in October 2015, Andriy Yarmolenko committed a dangerous challenge. One that almost broke the leg of an opponent named Taras Stepanenko.

The two reconciled after the game and exchanged jerseys. But afterward, Yarmolenko threw Stepanenko’s shirt on the ground. He did that while he thanked Dynamo fans.

Again, in another match, Yarmolenko kicked Stepanenko after the Shakhtar player kissed his badge and celebrated harshly in front of Dynamo fans during his side’s 3-0 win.

Their feud led to a mass brawl between the teams and at some point, it was as if the entire Ukrainian national squad was at war.

Why Ukranian squad? it is because the bulk of Euro 2016 was dependent on players from Dynamo and Shakhtar Donetsk.

The scandal threatened to disrupt the country’s Euro 2016 plans. Because of timely intervention, both players pictured below had to make peace. Putting their country first before themselves.

His Untold Number of Honours: Perhaps you might have taken notice of Yarmolenko during his stay in Dortmund or Westham.

Kindly stay tuned for more European Footballers’ Stories from LifeBogger. Surely, that of Sami Khedira, Shkodran Mustafi and Ivan Perisic would interest you.