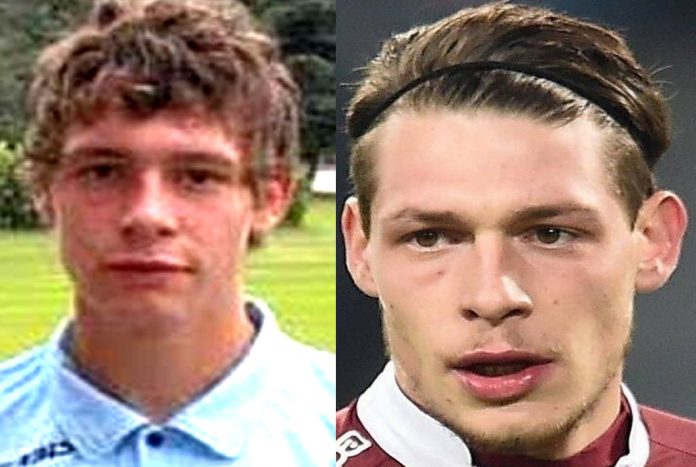 LifeBogger presents the Full Story of a Goal Poacher best known by the Nickname; ‘Rooster‘.

Our version of Andrea Belotti’s Childhood Story, including his Biography Facts, brings you a full account of notable events from his boyhood days to when he became famous.

The analysis of the Italian Goal Scoring Machine involves his life story before fame, family background, relationship life, and many other OFF-pitch facts about him.

Similar to Gianluca Scamacca, everyone knows he is a symbol of the modern-day forward. However, only a hand few consider Andrea Belotti’s Bio, which is quite interesting. Now, without further ado, let’s begin.

For Biography starters, Andrea Belotti was born on the 20th day of December 1993. His birthplace is Calcinate, an Italian village of about 6,000 souls in the province of Bergamo.

As at the time of his birth, his mum worked as someone who irons at a shirt company. Belotti’s father was a builder who would go out at 7 am and return at 7 pm with his knees wrecked.

Andrea Belotti grew up with his younger brother, Matteo, who is a chef and a well-known restaurant owner in Italy.

At the time of writing, both of his parents are retired and currently enjoying the dividends of their son’s footballing success. Speaking about his parents’ retirement, he once said;

“I took a while to convince and mum and dad to retire because I didn’t want to offend them”.

Belotti was raised in a Catholic family background. He spent most of his early days as an altar boy at the church of San Pancrazio di Gorlago, the village of his childhood.

Belotti had a relentless attitude to succeed right from the very start. He began to cultivate his passion for football in the oratory of Gorlago. It was an attitude shaped by his family which has affected his background.

Belotti’s second step as a footballer came with Grumellese, a club at the lower reaches of the Italian league system.

As a young footballer, he idolized Andrey Shevchenko. While playing for his Grumellese, young Belotti accepted trials for Atalanta and AlbinoLeffe.

He failed the first and finds an agreement to play in the youth sector of the second where he got as moulded as a centre-forward.

Asides from efforts from the club, Belotti’s parents, notably his dad, embedded in him some strict work ethics. As Belotti puts it;

My father told me: ‘If you don’t leave the pitch absolutely exhausted, it means you haven’t given it your all,’

Through determination, Belotti led his team to win the youth title “Trofeo Dossen“. See the photo below.

Winning the youth title got him elevated to the club’s senior side, which, at that time, played in the Italian Serie C.

Belotti came into AlbinoLeffe‘s senior side with a mindset to strive hard to achieve his goals. He was able to transform his thoughts into concrete actions on the pitch.

While other young stars got settled in the third division, Belotti also dreamt to see himself at the Italian upper leagues. Actualizing this dream meant making lots of sacrifices. He once said;

“It was tough when I was still a teen and saw my friends all go out clubbing.

I had to go to bed early almost in tears because I had to play the next day. Learning the hard way paid off for me.” 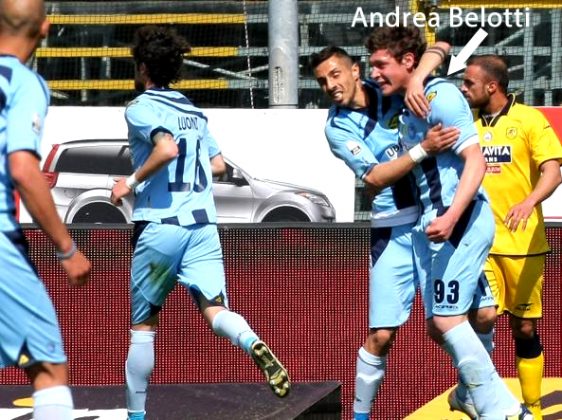 In the first season of his senior career, Belotti became the most used player. Also in that same year, his dreams to play at a higher Italian division came to pass BUT with a price.

In a bid to get himself up from the Italian league system, Belotti had to take a pay cut. According to him,

“When I moved to Palermo, I agreed to cut my wages by €400,000 because they couldn’t spend too much on someone coming from the third division. I was using that money as an investment, a bet on myself.

At Palermo, he played alongside Paulo Dybala. In two seasons, Belotti led his team to win promotion to Serie A.

This was also a time he also won the heart of his future wife, Giorgia Duro. In other not to take a rush to top European clubs, Belotti agreed on a move to Torino.

At Torino, Belotti became known for his strong aerial duels, standout acceleration, tactical intelligence. More so, his work rate and eye for goal became visible to the world. He alongside Gleison Bremer are considered Legends for The Maroons.

Behind every successful Italian footballer, there’s a glamorous wife, wag or girlfriend.

Without a doubt, Andrea Belotti’s striking abilities, as well as his lifestyle off the pitch, will help you build up a complete picture of him.

Belotti is currently married to Giorgia Duro as of the time of writing. 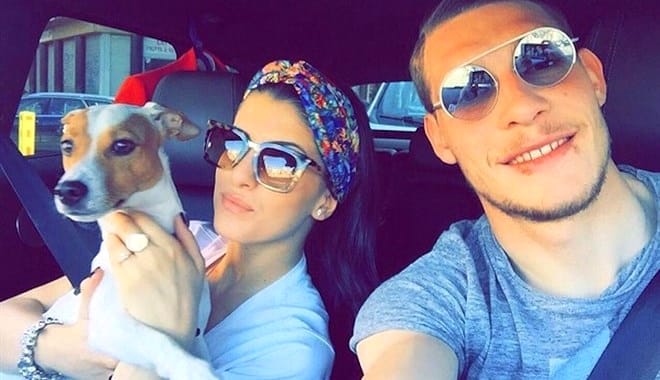 Both Belotti and Giorgia are lovers of their Jack Russel dog named Angi, who is like a son to both of them. As Belotti puts it;

I proposed to her by putting the ring on the nose of our dog, Angi.

The couple got married in June 2017 in Palermo, Giorgia’s hometown. It was an armoured ceremony in Palermo attended by many VIPs including his close friend, Ciro Immobile. 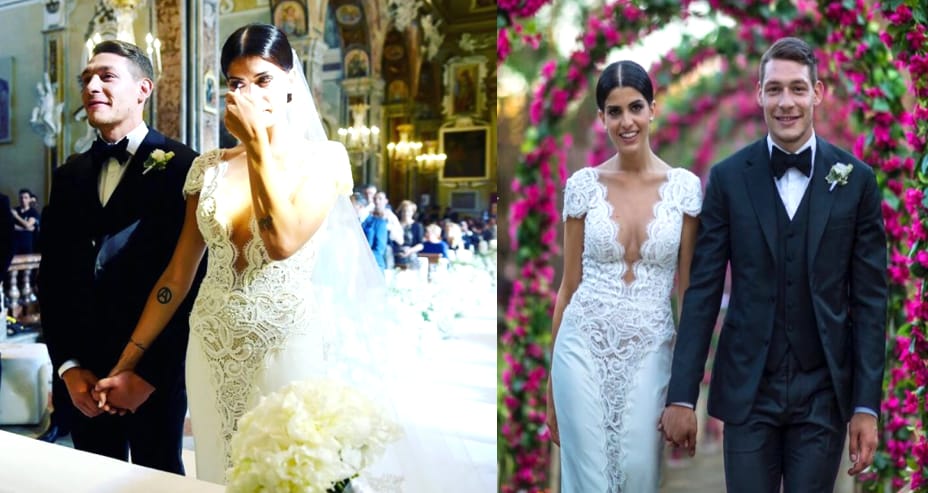 On their wedding day, Belotti chose to give Giorgia some wonderful words of love. In his words;

“DEAR GIORGIA, MY LOVE, I AM HERE WITH MY HEART IN MY HANDS. I TREMBLE, WE HAVE CROWNED A DREAM. WE WANTED IT STRONGLY AND TOGETHER WE BELIEVE IN IT. I LOVE YOU.

I WOULD SLEEP ALL YOUR LIFE BY YOUR SIDE. FOREVER. THE “YES” BEFORE GOD IS THE PROMISE THAT IS WORTH MORE THAN ANY GOAL I score. Now LET’S HAVE A FAMILY “.

For everyone who witnessed it or saw photos, both couples had a captivating wedding.

However, photos that came on their wedding night revealed sparking controversies that loomed in the Italian press for days. See below. 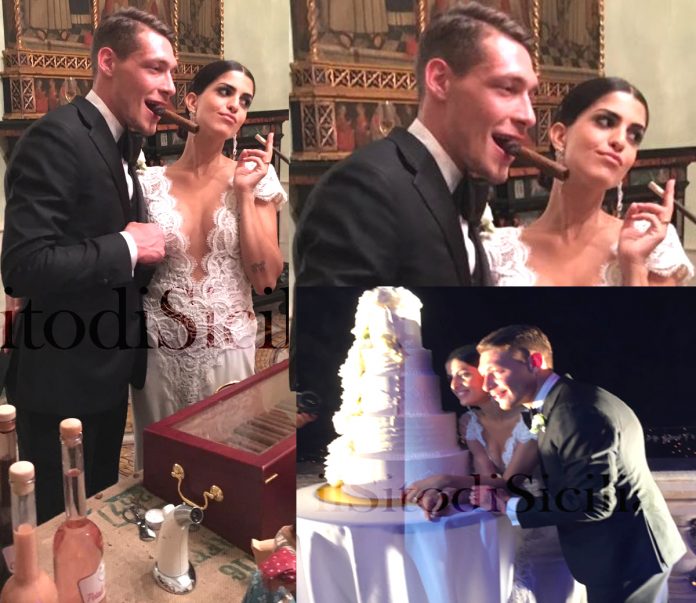 Belotti’s wife Giorgia Duro currently boasts an online fan base of more than 56k followers on Instagram thanks to a string of red-hot bikini snaps and olive skin which is seen below.

Belotti has been known for his trademark celebration, which entails placing a hand above his head to mimic a rooster.

Because of this, he has been nicknamed ‘Il Gallo’ – which literally means “The Rooster“. 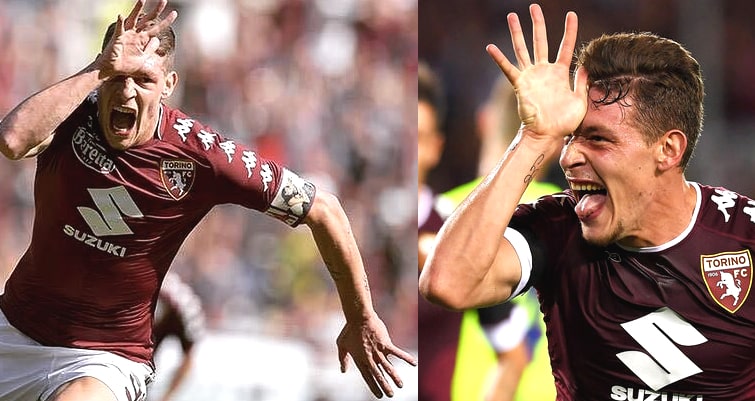 This nickname was given to him thanks to his rooster’s com gestures. According to Belotti;

“The first time I did the rooster’s comb gesture was because I promised it to my friend Yuri Gallo.

My aunt then told me that when I was a kid, I’d come to the farm to gather eggs, but instead would just chase the chickens around.”

On a more personal note, Belotti is generous, idealistic and has a great sense of humour. He has a motto tattooed on his arms which is inspired by Michael Jordan’s quote, which says;

Belotti is curious, energetic and has an open mind and philosophical view. He is able to transform their thoughts into concrete actions and they will do anything to achieve his career goals.

He hopes to join his brother in owning more restaurants after retirement.

Belotti throughout his youth career years studied so many strikers. As a young boy, his wish was to have the following;