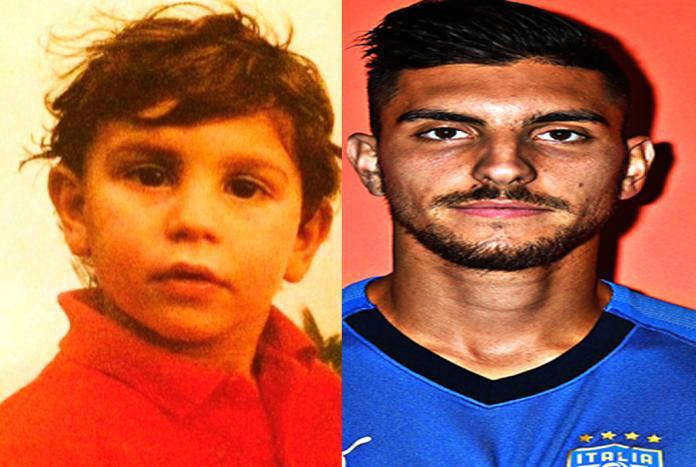 In a nutshell, this is a summarized history of the Football Genius known with the nickname “Montellino“. We begin from his early days, to when he became famous in the Serie A. To give you a taste of the engaging nature of Lorenzo Pellegrini’s Bio, here is a gallery of his life trajectory.

Yes, everyone knows he is one of Italy’s fast-rising football star, a football prodigy from a tactical standpoint. However, only a hand few of football fans consider our version of Lorenzo Pellegrini’s Biography which is quite interesting. Now without further ado, let’s begin.

Lorenzo Pellegrini was born on the 19th day of June 1996 to his parents, Mr and Mrs Antonio Tonino Pellegrini, in the great city of Rome. The Italian national has his family roots from the Romani ethnic group and was raised as the only male and second-born child to his lovely parents pictured below.

Lorenzo Pellegrini hails from a middle-class family background operated by his dad who once earned an average income as an amateur footballer (now retired but never tired). The Italian has his family origin from Rome, a city known for its more than 280 fountains, 900 churches and most importantly, the Great St Peter’s Basilica, known as the world’s largest church ever built by man.

Just like many other kids, growing up in Rome created some great sense of pride and a feeling of responsibility for Pellegrini. He lived & breathed the two main things that define the city, that is- Religion (Roman Catholic Church Headquarters) and Football.

In the area of football, early on as a child, Pellegrini would sit in front of the TV, from start to finish, never getting distracted as he watches his beloved AS Roma play- the club his entire family members supported. Asides living with his dad and mum, Pellegrini spent most of his early years around his big sister who goes by the name Gemella Pellegrini.

The struggle to become a professional footballer sometimes comes with massive pressure and while some footballers are able to manage it, others simply are not, hence seeing their career fade away into mediocrity. This is the case of Lorenzo Pellegrini’s father, Tonino.

The Early Quest for Football Education: When Lorenzo Pellegrini was aged 3 and a half years old, his dad began coaching him on how to play football. Soon, an ambitions Tonino realized he was a father with emotions, hence cannot train his child. This prompted the Italian to make a decision on searching for a football school for his son.

The first step taken by Tonino was to enrol Lorenzo Pellegrini (aged 5 and a half) in his first soccer school known as Almas Roma. This was a football school where children from all family background- rich, average or poor could register.

While Lorenzo Pellegrini was at Almas Roma, his dad ‘Tonino’ was so dedicated to checking up on him, almost remaining jobless in the act. This prompted the football school to consider employing him in one of its department.

While the school suspended football activities in order to re-develop its playing fields in Trigoria, little Pellegrini, who couldn’t wait for the project to be completed left the school to join Longarina, another football school. While playing there, he also played football at the Francisco Totti sports centre. The decision to play with the Roma Legend’s football centre paid its dividends as he got the opportunity to attend trials with the prestigious AS Roma youth academy.

At the age of 11, Lorenzo Pellegrini’s passion for the game saw him passing trials and getting enrolled into the academy unit of his hometown football club, AS Roma. After the successful enrolment, the young Italian was deployed as an attacker thanks to being the tallest kid in the block. Later on, he was redeployed to midfield by Vincenzo Montella due to his technical skills and versatility. This decision paid off as it made Pellegrini standout from the rest of his teammates.

Early on with the academy, Lorenzo was regarded as physically strong, agile, dynamic and a hard-working midfielder with tremendous ball control and ability to make attacking runs.

Just like his fellow teammates, Pellegrini kept an eye on his dreams of progressing through the academy ranks to the first team. When it comes to choosing an idol to learn from, the Italian’s first choice was Ronaldinho followed by the two legends of Roman distinctions; Francesco Totti and Daniele De Rossi.

The Heart Condition: In the year 2012 at the age of 16, Lorenzo Pellegrini was looking forward to his debut. Little did he know his professional dreams were about to be cut short by a heart condition. Did you know?… In one of his fitness + medical checkups, Lorenzo Pellegrini’s diagnosed stated he was suffering from Cardiac Arrhythmia. The doctor stated that there was a malfunctioning of his heart’s electrical system, which happens during intensive field plays.

Lorenzo Pellegrini’s heart condition threatened his career, first making his football to be suspended, a situation which frustrated his family. His sufferings were similar to fellow Italian footballer- Federico Benerdeschi who also had a heart condition during his youth career.

Any young footballer who has passed through a similar situation would know only well the deep emotional trauma it can cause. Strong-willed Lorenzo Pellegrini never gave up as he fought the disease for four months, defeating it and giving football a set date to return.

After fighting off the ailment, Lorenzo returned to football with a different idea in mind. After securing AS Roma academy graduation, he decided to travel 422 kilometres north of Italy to Sassuolo where he continued his footballing maturation process. At the club, his confidence starts to grow thanks to a fruitful spell.

Rather than crumble after his heart condition, the midfielder went from strength to strength, achieving a meteoric rise in Sassuolo. During the 2016–17 season, Pellegrini became the youngest player to score 10 goals in a single Serie A campaign. His performances with Sassuolo convinced AS Roma to trigger a buy-back-clause on him which saw his return back to his family club with the number 7 jersey resting on his shoulders.

With Fransisco Totti and Daniele De Rossi departing the Stadio Olimpico, AS Roma was in desperate need of a new hero. That new hero came in the local boy Lorenzo Pellegrini after he began to repay the fans for their support.

With his characteristics of stamina, ball control, movement, flair, and ability to make attacking runs from behind, Lorenzo helped AS Roma in many big wins such as the famous FC Barcelona Champions league triumph. Among those tracking the young Italian prodigy at the time of writing are ​rumoured to be Manchester United, Arsenal, Tottenham, as well as Antonio Conte’s Inter.

Even thou Serie A’s ‘decline’ has been well documented, the country’s fans are excited to see Pellegrini along with other exciting breeds of Italian talents- the likes of;  Federico Chiesa, Nicolo Zaniolo, Moise Kean, Nicolo Barella, Sandro Tonali, Gianluigi Donnarumma and Patrick Cutrone among others who could make a huge impact on world football. The rest, as they say, is now history.

Along with massive hype comes the questions lots of fans much have asked about the Italian football genius. Fans have asked if Lorenzo Pellegrini has a girlfriend or wife?. Yes!, there is no denying the fact that his handsome looks coupled with the style of play wouldn’t position him at the top of every lady’s wish list.

Behind the successful and handsome footballer, there’s been a glamorous girlfriend who goes by the name Veronica Martinelli. Both began their relationship on the playground as childhood besties before developing feeling for one another.

The pair met for the first time through a mutual friend when Pellegrini was in the AS Roma academy. Both lovers went on to make their relationship public around December 2012 via Instagram. The fact that they’ve been dating for a while left fans with no doubt that a wedding could be the next formal step, and YES they were right!. Pellegrini got married to Veronica Martinelli in 2018 with close family members and friends attending the occasion.

Their marriage marked a new chapter in their lives as things began to feel differently from a positive point of view. After their marriage, both lovers didn’t waste any time as they began the quest to have a baby. As a good/loving husband, Lorenzo was there to provide emotional support to Veronica through during the time of her pregnancy until childbirth. Lorenzo became a proud father of a baby girl named Camilla on the 15th of August, 2019.

Without a doubt, Lorenzo and Veronica have remained one of the most established couples in AS Roma. One of the couple’s favourite getaways for the summer is the Spanish island and waters of Ibiza among others Islands. As observed below, both lovers ooze confidence in every one of her summer snap.

Getting to know Lorenzo Pellegrini personal life away from football would help you get a better picture of his personality. Away from football, Lorenzo is sociable, communicative and always ready for fun with his friends. As observed below, he has an abundance of social contacts and loves to associate without putting any professional ego to anyone’s detriment. Never a dull moment with him!!

More so on his personal life, Lorenzo Pellegrini is so full of nature with lots of seaside adventures billed to his name. The Italian has fallen in love with fishing, which is a great hobby asides football. The fish leisurely man loves fishing on all kinds of species.

For Lorenzo Pellegrini, Family means everything and the most important thing in the world. Each time he goes to the field, he feels like he is representing his entire family. Now let’s tell you a bit about his family members.

About Lorenzo Pellegrini’s Dad: His full names are Antonio Tonino Pellegrini and he is nicknamed ‘Tonino’. The proud father pictured below recently celebrated his 60th birthday. This by implication means he had his son Lorenzo in his late 30’s.

About Lorenzo Pellegrini’s Mum: Great mothers have produced great sons and the mother of Lorenzo isn’t an exception. The devoted mother, unlike her husband, keeps a much lower profile and has made a conscious effort to avoid any sort of spotlight on her. Even her name seems to be void of the public.

Deciding between practicality and pleasure is at the time of writing, not a difficult choice for Lorenzo. As observed previously, the Italian surely knows how to enjoy himself with his family and friends. However, Pellegrini is an antidote to lavish spending and living a flamboyant lifestyle, one easily noticeable by a handful of pretty expensive cars and mansions.

About his Nickname: Did you know?… Pellegrini’s nickname is ‘Montellino‘ which means ‘Little Montella‘. The name came because of his way of celebrating Goals. Lorenzo Pellegrini does ‘the flying airplane celebration‘, an act similar to that of former AS Roma legend- Vincenzo Montella.

The Year he was Born:  We’re taking a trip down memory lane by rewinding to 1996, the following unforgettable happened that year Pelegrini was born. Starting off, 1996 brought together these five ladies known as Spice Girls.

Also in 1996, The Nintendo 64 was launched, post-school afternoons were spent by many playing hours of Super Mario and finally, Tupac Shakur was killed (7 weeks after Lorenzo Pellegrini was born) in a drive-by shooting in Las Vegas.

FACT CHECK: Thanks for reading our Lorenzo Pellegrini Childhood Story Plus Untold Biography Facts. At LifeBogger, we strive for accuracy and fairness. If you find something that doesn’t look right, please share it with us by commenting below. We’ll always value and respect your ideas.