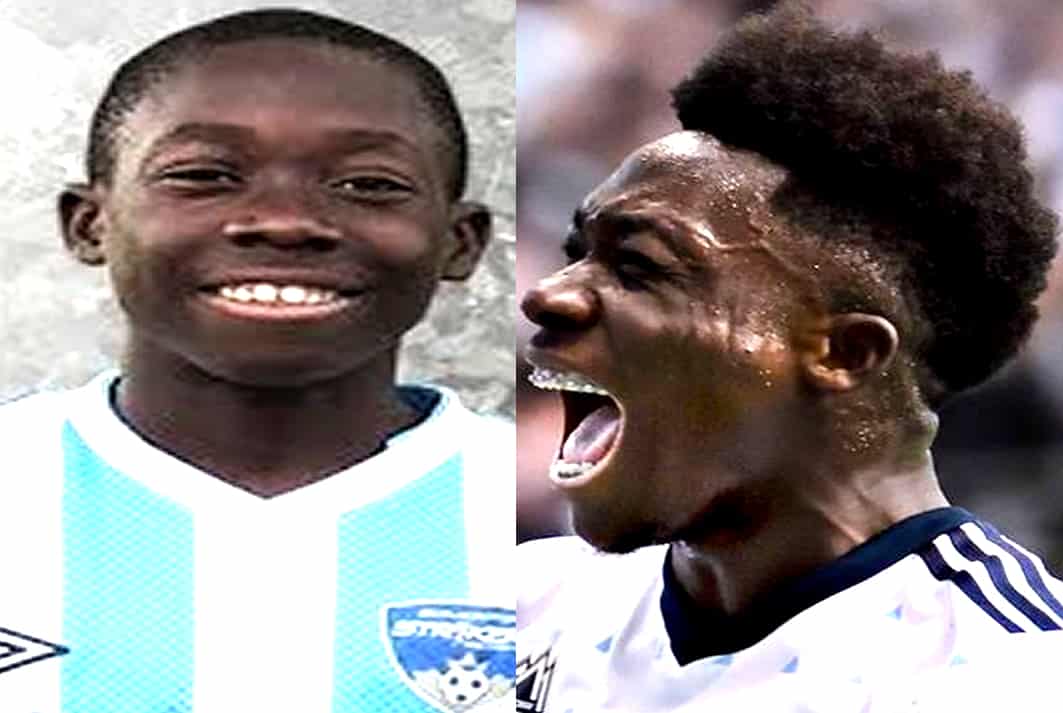 Starting off, he is nicknamed “Chef D“. We give you full coverage of Alphonso Davies Childhood Story, Biography, Family Facts, Parents, Early Life, Lifestyle, Personal Life and other notable events right from when he was a child to when he became popular.

Yes, you and I know he is one of the most gifted soccer players to have come out of the MLS. However, only a hand few of fans consider our version of Alphonso Davies’ Biography which is quite interesting. Now without further ado, let’s begin.

Alphonso Boyle Davies was born on the 2nd day of November 2000 to his mother, Victoria Davies, and father, Debeah Davies, at the popular Buduburam refugee camp in Ghana. He is the first child and son out of three children born to Victoria and Debeah.

Yes, you heard us right!, Alphonso was born in a Ghanian refugee camp, meaning, he is miles away from being a Ghanian national. Truth be told!, he was originally meant to be a Librarian national. and Did you know?… Alphonso Davies’ parents fled from Liberia (the west African country) in 1999, after the second Liberian civil war broke out.

Not just his parents, but most of Alphonso’s Davies’ family members traveled hundred of Miles across West Africa until they eventually found sanctuary at the Buduburam refugee camp near Accra in Ghana where he was born. It was at the camp that young Alphonso spent the first four years of his life growing up in a land alien to his family origins.

Speak of Alphonso Davies’ family origins, his parents without a doubt, are Liberians from a poor family background. Debeah and Victoria were young couples when the second Liberian War broke out, a development that left them with the options of participating in the war or fleeing. Fortunately, they choose the latter and now, both (pictured below) live to appreciate their choice of life rather than the possible annihilation of their family tree.

“It was pretty hard to live in Liberia at the time of war because surviving means you have to carry guns to fight. We had no interest in that,”

recalls Alphonso Davies’ father. On his mum’s part, she also recalls crossing over dead bodies to get food for her family members. Indeed, such was not the kind of environment they would want to have their children grow up at.

Alphonso Davies’ family embraced a migration offer to Canada as part of a resettlement program at the time he was five years of age. They arrived in the country in 2005 and initially settled at Windsor in Ontario.

A year later, the family moved to the city of Edmonton in Alberta. It was in the city that life really got started for Alphonso, who grew up as a happy kid alongside his younger sister Ruth and little known brother.

In fact, the grass fields of Northmount Elementary at Edmonton is where Alphonso Davies first learned how to play football as a childhood sport. This was where his football destiny began.

Thanks to Melissa Guzzo – Alphonso’s grade 6 teacher and sports coach at Mother Theresa Catholic school – the football prodigy was enrolled in an after-school initiative for inner-city kids called “The Free Footie Programme“.

True to its name, Free Footie was free as it helped Alphonso Davies’ parents who were not able to raise football fees for other football academies. The initiative also assisted other inner-city kids who could not afford registration fees or transportation to explore their interests in football. Alphonso later on, went on to join local club Nicholas Academy. This was followed by a significant 8-year early career with Edmonton Strikers.

In 2015, Alphonso Davies’ parents agreed to a career turning, an offer that would take their first son away from them to play in Vancouver. By our measurement, it is was approximately 1,159.5 km away (by road) from family home in Edmonton. Debeah and Victoria gave Alphonso their blessings and sent him forth to join the Vancouver Whitecaps youth set-up.

The then 14-year-old impressed at the club, such that he became the first youngest player to sign a USL contract at 15 years, 3 months in 2016. What more?… Alphonso earned a promotion to Vancouver Whitecaps FC’s first team in 2016, made his MLS debut that same year and had subsequent impressive appearances.

At the peak of Alphonso’s career with Vancouver Whitecaps FC, he was named the club’s Player of the Year 2018 and also received the whitecaps’ Goal of the Year award. Thereafter, he bode farewell to the club by scoring two goals in their 2–1 victory over the Portland Timbers. At this time, the young prodigy could feel his destiny calling him from Europe.

Months later in January 2019, Alphonso began a new season playing for German giants Bayern Munich. He was signed to the club for a record £9.84m fee in 2018. Ever since the 19-year-old joined the club, he has been rubbing shoulders with superstars – like Robert Lewandowski, Philippe Coutinho, David Alaba – and has even won his first Bundesliga title with the club. The rest, as they say, is history.

Who is Alphonso Davies’ Girlfriend?… Does he have a Wife and Kid(s)?

Away from the field of play, Alphonso makes news for his relationship with Canadian born girlfriend Jordyn Huitema. Not much is known about when the lovebirds began dating. However, they have been together long enough to be seen as Canadian Power Soccer couples by the press. This is because Jordyn plays professional football for French Division 1 Féminine club Paris Saint-Germain and the Canada national team.

Alphonso regularly flies into Paris to spend good time with his girlfriend Jordyn before returning to Bayern Munich. They invest enough attention in their budding career, a development that explains while they don’t have son(s) or daughter(s) outside wedlock. Notwithstanding, there’s no ruling out the fact that they could take their relationship to another level (marriage) in no time.

Alphonso Davies owes his success in football to his amazing family. Sit back and relax as we bring you facts about his family members in this section. We start by helping you get more facts about Alphonso Davies’ parents.

About Alphonso Davies Father and Mother:

The winger’s parents are Debeah and Victoria respectively. In 2005 Debeah and Victoria made the life-changing decision of migrating to Canada from Ghana without knowing anything about the place or having relatives there. They only believed that the move would help afford baby Alphonso a bright future.

It goes without saying that the decision paid off more than they could have imagined. In fact, the winger notes that he finds it easy to motivate himself whenever he looks back at the life-changing decisions that his ever-supportive parents made regarding his future.

About Alphonso Davies Sibling and Relatives:

Alphonso has two younger siblings who he is far older than. They include his younger sister Ruth and a little known younger brother. The siblings were born in Canada. As such, they didn’t have to follow the procedure of obtaining Canadian citizenship as Alphonso did.

Though the winger has not given the press to know more about his siblings. Neither has he spoken about his family roots and ancestry as it relates to his maternal and paternal grandparents. Similarly, Alphonso’s uncles, aunts, cousins, nephew and nieces are largely unknown at the time of writing this bio.

Who is Alphonso Davies?… Do you know that he embodies personality traits that are exhibited by individuals guided by Scorpio Zodiac Sign? Truth is, Chef D (his nickname) is passionate, intuitive, outstanding and has no difficulty saying exactly what he wants to say.

Added to traits of Alphonso’s persona is his penchant for not revealing much about his personal and private life.

The winger’s interest and hobbies include dancing, playing video games and spending good time with his family and friends. He is also good at cooking, a hobby which gave rise to his nickname “Chef D“.

Regarding how Alphonso Davies makes and spend his money, he has an estimated net worth of $1 million at the time of writing this biography. Streams of the winger’s wealth originate from the wages and salaries he receives from playing top-flight football.

The winger also racks up significant income from endorsements. As such there are no questions regarding how he can afford to acquire luxury assets like exotic cars and expensive houses.

To end our Alphonso Davies childhood story and biography, here are little known or untold facts about the winger.

Fact #1– His Salary Breakdown per Seconds:

Since his breakthrough in January 2019, lots of fans have pondered on how much Davies Alphonse earns?…. That 2019, Chef D’s contract saw him pocketing a whopping salary of 1.2 Million Euros per year. More surprising below is Alphonso Davies’ salary breakdown per year, month, day, hour, minute and seconds.

This is how much has Alphonso Davies earned since you began viewing this Page.

Alphonso has just two years experience playing top-flight football, a development which explains why he has a low FIFA rating of 73. It is a known fact that time heals and improves. The case would not be any different for the winger as he has the potential to exceed 90, even becoming the FIFA’s best footballer.

Players who smoke and drink irresponsibly have a thing for dark lips and frequent run-ins with the law. Alphonso is the perfect opposite of both outcomes.

What is the point of having Tattoos when one is proudly dark? Except body arts are drawn with white lines, Alphonso would not be needing any to complement his height of 5 feet 11 inches.

Fact #5- What is Alphonso Davies’ Religion:

Do you remember Mother Theresa Catholic school?… Yes, it’s a Catholic school in Edmonton, Canada. We’ve used that to imply that Alphonso Davies’ parents had possibly raised their son to follow the Christian religions faith. Although, the youngster has not been specifically outright with his bearing on matters of faith. But, our odds are in favour of Alphonso being a Christian because he has a sister named Ruth while his mom bears the name – Victoria.

FACT CHECK: Thanks for reading our Alphonso Davies Childhood Story Plus Untold Biography Facts. At LifeBogger, we strive for accuracy and fairness. If you find something that doesn’t look right, please share it with us by commenting below. We’ll always value and respect your ideas.

I am so so please and thankful to God so mush for this wonderful and successful struggles for these Liberian parents for what they did in the past for the benefit of today success
Alphanso the sky is your limit my brother, you will even do more than that
Let the Lord be with you in your project!!!!!!!!!
We Liberins are all with you as we once did in the past for the only World best in Liberia and today He’s President for our Country.

I pray you achieve a highest potential in footbal
(I.e to became a balon d’or winner).
Ghana is your home

I am trilled by this biography of Alphonso, and as a Liberian, I am even more proud for the fact that he just won the Champions League final with his German club. Liberia is proud of you, Alphonso!!!! Soar high and you will make the very biggest difference one day

I just watched your performances during the Champion League final with PSG. You are such a good player.

I am very glad as Liberian to see my Liberian brother playing this kind of football, I wish him Best wishes. All the Liberians extend thanks apperciation to you brother Alphanso Davies, despite you naturalizing yourself to Canada, we still love as Liberian.please come home and do the little things that matter for the country.