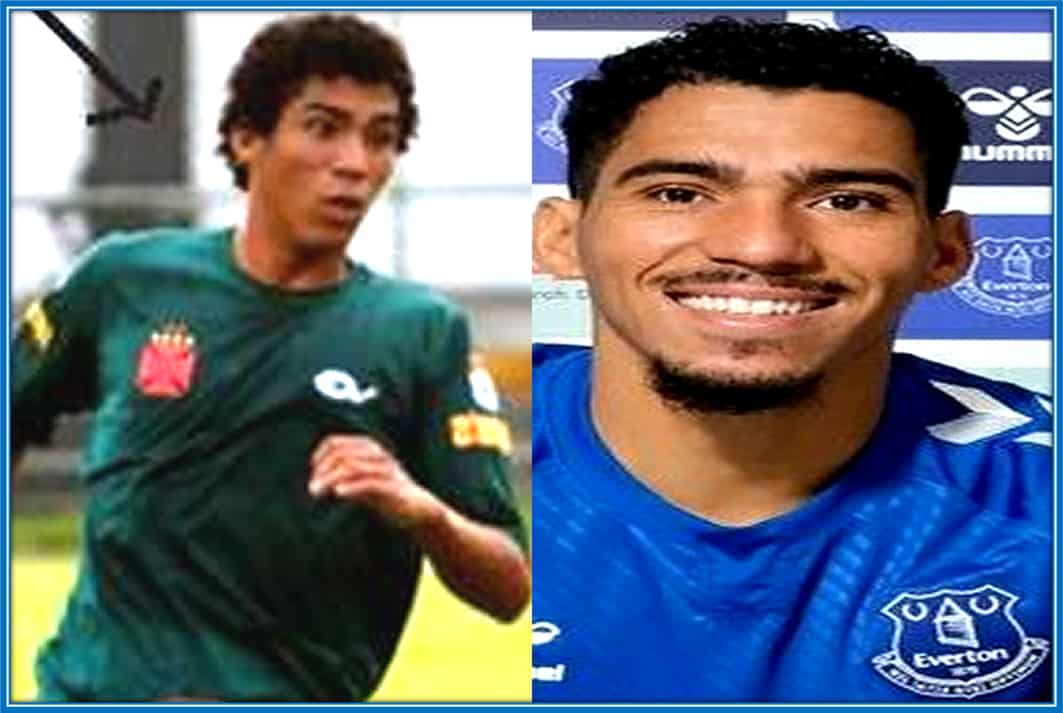 In the nutshell, this is a story of the Brazilian, from his boyhood days, to when he became famous.

To whet your autobiography appetite, here is his childhood to adult gallery — a perfect introduction of Allan’s Bio.

Yes, football fans appreciate what Allan has provide Everton with under Carlo Ancelotti. Despite the accolade, only a few know Allan’s Life story. Without further ado, let’s begin.

Starting off, his full names are Allan Marques Loureiro. Allan was born 8th day of January 1991 to his parents, Mr and Mrs Loureiro, in the popular football city of Rio de Janeiro, Brazil.

In the earliest days of his life, Allan became attracted to football after seeing so much dedication of his fellow countrymen to the game. His interest in soccer did not warrant him full approval to play.

Most time, his mom played the role of an ‘overprotective-mother’ and restrict him from going to the streets to play football.

Therefore, Allan, who developed a kin interest in soccer, could not play football as much as he wanted.

Although his mom tried to restrain him from football in his earliest days, she soon permitted him to play with his peer as he grew older.

To tell you the truth, nobody can subdue the love of football that gushes through most families in the streets of Brazil.

Hence, we could safely deduce that Allan’s football prowess is relative to his Family Background.

You may have probably known that a person’s ethnicity or Family Root can be traced from his full name.

Bearing this in mind, Allan’s maternal and paternal family names Marques and Loureiro respectively are of Brazilian heritage.

Some years ago, contradictions came as regards Allan’s country of origin.

According to BleacherReport, there was once the discussion of the footballer abandoning Brazil for Italy. Could it be he has family roots traced to the European country?

As a little boy, Allan showed more concern for soccer than anything else. He could hardly spend a day or two without playing football.

Back then, his dream of becoming a revered player solidifies. There was nothing that could change Allan’s mind from delving into football.

Hence, his parents had no option than to help him join Madureira Esporte Clube (a Brazilian football team based in the city of Rio de Janeiro).

Holding up to his determination of becoming a revered player, Allan paid attention to every lesson taught to him at the Madureira.

After a few years of rigorous football training, Allan turned out to become an exceptional junior player. In fact, his skills and agility in several match appearances for Madureira attracted many professional clubs.

By the time Allan Loureiro clocked 17 years, a Uruguayan club – Deportivo Maldonado – signed him for an undisclosed contract fee.

Thus, he began his professional career with his new club. The upcoming player did not spend much time at Maldonado as they loaned him to a Brazil-based club, Vasco da Gama.

Moving to Vasco da Gama seems to create a better opportunity for Allan’s professional career. As a matter of fact, he got more playing time in their youth team.

Fortunately, Allan was promoted to Vasco da Gama’s first team after making a lot of grand accomplishments at the club’s junior team.

Do you know?… After helping Vasco da Gama to win the Serie B, young Allan, unfortunately, suffered from a serious injury.

Just when he was gaining prominence did the unfortunate limiting force of football – Injury – catch up with him. Sadly, he could not make a good number of appearances for his club because of the injury.

Like his fellow countrymen (Neymar and Felipe Anderson) who have been in his shoes before, Allan strived hard to recover from his injury.

Hence, he trained constantly with his club’s junior team to regain fitness after recovery.

Interestingly, Allan’s training was not laid to waste. As a matter of fact, he made a remarkable performance upon his return to the first team of Vasco da Gama.

Thanks to his unmatched skills, Allan could easily send the balling rolling at the back of the net. Hence, he helped his team win the 2011 Serie A tournament.

Fortunately, Allan was going to meet a skilled player like Bruno Fernandes as he sealed a new deal with the Italian club, Udinese, in June 2012.

At the club, he became an unrivalled midfielder who was compared to the likes of Paul Pogba.

A few years later, he signed a €10 million transfer deal with Napoli and put up a great performance against iconic players like Immobile, Dzeko, and Paulo Dybala in the Serie A.

Fast forward to the time of writing Alan’s Biography, he has signed to the English club – Everton.

Thanks to Carlo Ancelotti, who loves his football pattern, Allan reached a three-year deal of £21.7m with Everton.

Soon he is going to be displaying a world-class skill while playing alongside James Rodriguez, who was also signed into the English club in 2020.

Who is Allan Loureiro’s Girlfriend/Wife?

As an established player, a good number of people have always inquired about Allan Loureiro’s wife or girlfriend.

To tell you the truth, Allan has a wife who is exquisite and could be described as everyman’s dream woman.

In case you don’t know, Allan’s wife (pictured below) is Thais Valentim.

Just like his former teammates (Kalidou Koulibaly and Lorenzo Insigne), Allan and his wife worked together to survive the uproar that emanated from Napoli’s first squad mutiny in November 2019.

Like what is attainable in soap opera dramas, Allan usually shows off his pretty wife on his Instagram handle.

Furthermore, his marriage with Thais has resulted in the birth of an undisclosed number of children.

However, the Brazilian has shared one of his son’s photos when he celebrated his eight years birthday in Naples, Italy.

Even after his rise to fame, Allan’s Family has been left behind the scene of his success.

Could it be that most people show less concern about him or is it because he is underrated by many? Find out more about every member of Allan Loureiro’s household, starting with his parents.

About Allan Loureiro’s Mother and Father:

Believe it or not, Allan’s mom and dad have influenced his sense of morality.

Interestingly, his mom, Rosana has often cheered on him each time he goes out to the pitch to play football. On the other hand, not much information is known about Allan’s dad.

Her prayers and goodwill have always been with the Brazilian. See below, how Rosana celebrates with her son after he and his teammates won the Copa America competition.

About Allan Loureiro Siblings and Relatives:

Owing to his secretive nature, Allan Loureiro has hardly talked about his brothers and sisters with the media.

Truth is, the Brazilian only pays attention to football-related matters whenever he talks in a press conference. No wonder there has been no information pointing to the identities of his paternal grandparents.

Following his move to Everton, Allan’s fans hope that he would loosen up a bit and reveal some interesting details about his maternal grandfather and grandmother.

If the Brazilian player gets to attain more recognition, we would probably get to see many people acclaim themselves as his uncles, aunts, nephews, or nieces. Only the future holds the answers to our curiosity.

For those of you who think Allan is only concerned about football, you’ve got your theories all wrong.

Aside from his football endeavors, the Brazilian always spend most of his time with his beautiful wife. While he is at it, he often takes some snapshots to reminisce about the wonderful time spent with the love of his life.

Funny enough, Allan Loureiro’s characteristic goes contrary to his zodiac traits – Capricorn. Having lived a secretive life, the young Brazilian is down to earth and kind.

On one occasion, when his fans compared him to Arturo Vidal, he felt delighted and said;

“Vidal? It is true that we are a bit similar, we have similar styles of play, I must continue to work hard, I’m happy that people are pleased with how I’m playing.”

The annual earnings of the less popular but yet influential midfielder would shock you. Do you know?… Allan receives an annual salary worth about €4 million at Napoli.

Notwithstanding, his transfer deal of €28.00m to Everton has definitely shot up his Net Worth in 2020. The table below gives you a full breakdown of Allan’s salary at the time of writing this Biography.

Contrary to the pictures of your imagination about Allan’s lifestyle, the Brazilian has no interest in displaying luxury. Indeed, we can not dispute the ultimate reality that Allan owns expensive houses and maybe many exotic cars.

However, his humility and reserved personality have restricted him from displaying his assets on the internet.

Funny enough, the Everton player has been sighted driving a compact car. Look at the picture below and try to deduce what brand of car he is cruising.

In other to give you a complete package of our Allan Loureiro’s Life Story, here are a few facts that would help you get a complete grasp of his Biography.

His 16 Pence Earnings Per Seconds:

We’ve strategically put up an analysis of Allan’s salary as the clock ticks. Find out for yourself how much the Brazilian has earned (Everton Salary Stats) since you came here.

This is what Allan Loureiro has earned in Everton since you began viewing this Page.

Do you know?… The Everton midfielder is interested in tattooing his body. Just like Zlatan Ibrahimovic, Allan has inked a lot of tattoos on his body. Below is a picture that shows some of Allan Loureiro’s tattoos.

As an exceptional midfielder, Allan has showcased a lot of astonishing skills, a feat to behold. On the pitch, he usually plays as a central or defensive midfielder.

In most circumstances, the flow of the game may warrant him to switch into attacking from the midfield.

There is more to his playing pattern than what meets the eyes. Of course, he is strong and agile. Hence, he takes advantage of his stamina to tackle and intercept the ball easily.

Below is a picture of Allan’s tackles against the iconic Neymar Jr. in a match between Napoli and P.S.G.

Although many football fans do not always sing the praise of the Brazilian player, he is an icon to behold on the pitch.

Even Fifa has approved of his football prowess to the extent of giving him an overall rating of 84. Take a good look at his Fifa stats in the picture below.

The Biography of Allan Loureiro teaches us that absolute composure and dedication to our endeavours will yield results.

Even though many people talk little about Allan, he has helped prestigious teams attain a great height of success during his career life with them.

No wonder he holds the honour of being a technically-gifted destroyer who once bossed Paul Pogba.

Finally, the entire team of Lifebogger appreciates you for your time spent in reading Allan Loureiro’s Life Story.

Kindly share your opinion about Allan’s football style of play in the comment box below. Also, contact us if you find anything that doesn’t seem right in the Bio.