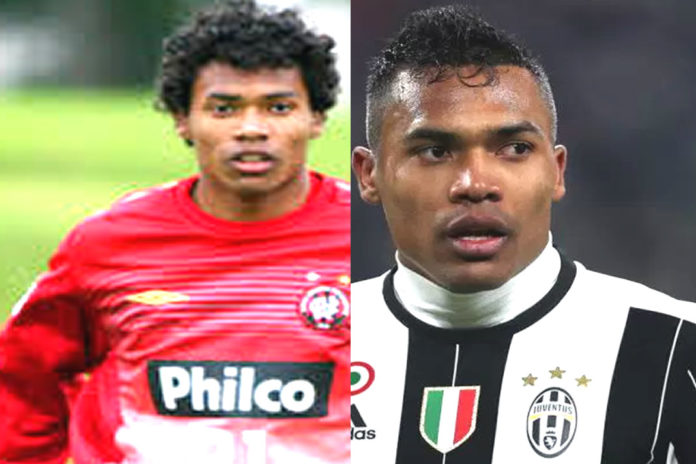 LifeBogger presents the Full Story of a Football Genius who is best known by the Nickname; ‘The Next Roberto Carlos’.

Our version of Alex Sandro’s Childhood Story plus Biography Fact brings to you a full account of notable events from his childhood time right until his moment of fame.

The Analysis of the Brazilian footballer involves his life story before fame, relationship life, family life, and many OFF-Pitch little-known facts about him.

Yes, everyone knows about his Juventus Exploits, but not many fans have read Alex Sandro’s Biography, which is quite interesting. Now, without further ado, let’s Begin.

For his Biography starters, Alex Sandro Lobo Silva was born on the 26th day of January 1991 in Catanduva, São Paulo, Brazil. He was born to his mother, Mrs Lobo, and father, Mr Reinaldo Ramos da Silva.

Alex Sandro grew up in the Bom Pastor neighbourhood in Catanduva, located in the backcountry of São Paulo State, 400 kilometres from the capital of Brazil.

The Baller grew up helping his parents cultivate and process sugarcane – which his family’s hometown is known for. Even while doing this, he played football with fellow kids in the streets.

After rising up the ranks in his neighbourhood football,  Young Alex began to play at his hometown club CELT, the club run by Catanduva municipality. His side took part in all youth tournaments in São Paulo State.

Alex Sandro at all times was considered the best player on his team. This prompted a move to seek a better club for him.

He finished his youth career in Atletico Parananense between 2006 and 2008 and ending a professional career with the club in 2010.

Sandro needed the right club to market him off to Europe. He decided to apply for a loan request for Santos.

Which playing there as one of their best players, Porto’s scouts spotted him thereby making his dream of coming to Europe come to pass.

After playing for 4 seasons, he made another progressive move in his career. This time, it’s from Porto to one of the best marketable clubs in Europe, Juventus.

As at time of writing, Antonio Conte awaits his signature and news on Alex Sandro’s transfer to Chelsea FC.

This section of Sandro’s Bio tells you about his Love Life. Starting off, have you met Natalia Regina? She is the stunning wife of Brazilian soccer player Alex Sandro.

Unfortunately, there isn’t much about Natalia Regina; like her stud, she was born and raised in Brazil. Natalia gave birth to their first child and daughter Alexia on October 8, 2016.

Sandro Lobo Silva has the following attributes to his personality.

What Alex Sandro likes: Fun with friends, helping others, fighting for causes, intellectual conversation and listening.

Alex Sandro dislikes: Limitations, broken promises, being lonely, dull or boring situations and people who disagree with him.

In summary, Alex Sandro is energetic and eccentric and energetic. He is a deep thinker and a highly intellectual person.

Alex Sandro Bio – About his Football:

Offensive skills: Without a doubt, Alex Sandro is a dynamic influence from the left flank. He supports his team with the right timing. He manages well the ball and is able to use his solid body in the offensive.

Defensive skills. Alex is alien to the lazy thought-process that deems most Brazilian full backs to be lax on their defensive duties.

In fact, he reads well the game and gets well in position without being afraid to be pointed. This is why Roberto Carlos hailed the Brazilian as his ‘heir’.

The Fight for a Brazilian Shirt:

Brazil has an embarrassment of riches in Sandro’s left back slot, boasting Real Madrid’s Marcelo and Filipe Luis of Atletico Madrid as their regular first-choice options.

He has just a few caps for his country despite being considered as one of the world’s best in his position. Taking Marcos Alonso into consideration, Sandro is another weapon to the Chelsea Football Team.

Initially, Alex Sandro came from a lower middle-class family background. This was before his hard work and football investment paid off for him and his family.

He is now a super-rich first-class citizen. Today, Alex Sandro’s father (Reinaldo Ramos da Silva), mother (Lobo Sandro), brothers, sisters, uncles, aunties and other members of his family tie are proud of their very own.

FACT CHECK: Thanks for reading Alex Sandro Childhood Story plus untold biography facts. At LifeBogger, we strive for accuracy and fairness. If you see something that doesn’t look right in this article, please place your comment or contact us!.