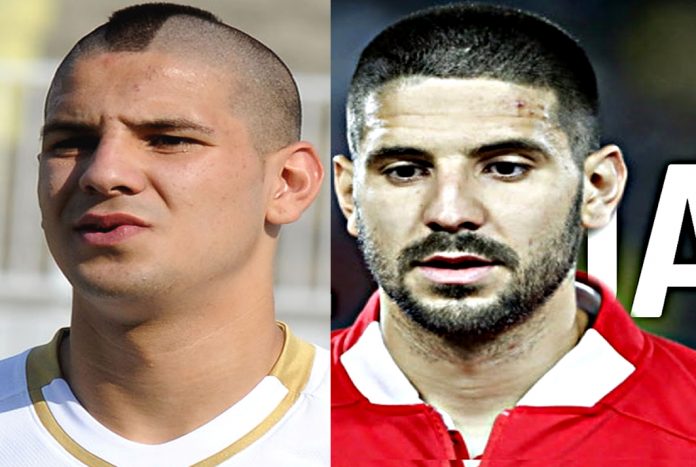 LifeBogger presents the Full Story of a Football Genius best known by the nickname “Mitro“.

Our Aleksandar Mitrovic Childhood Story plus Untold Biography Facts brings you a full account of notable events from his childhood time to date.

Yes, everyone knows about his goal-scoring capabilities. But only a few consider Aleksandar Mitrovic’s Biography, which is quite interesting. Now without further ado, let’s Begin.

For Biography starters, Aleksandar Mitrovic was born on the 16th day of September 1994. The Serbian was born to his mother, Natasha Mitrović, and father, Ivica Mitrović, at Smederevo, Serbia, formerly Yugoslavia.

Mitrovic grew up with his brother Milan who is currently his agent in the city of Smederevo, eastern Serbia.

Right from the very start, the Mitrovic Family have been a strong Newcastle supporter, people who admired Alan Shearer.

On a more personal ground, Mitrovic, during his early days, was outgoing, socially confident, and stubborn.

He once recalled growing up and being told that he would become a criminal or a kickboxer by his father. In his words;

Reflecting on his early life, when asked by Telegraph about what he would be doing without football, Mitrovic once replied;…

I don’t know what I would do if I didn’t play football.

Mitrovic had a lot of energy when he was a child. Growing up, it was difficult for his parents to condone his behaviour. It was his participation in football that steered him away from the poor choices he made as a child.

Mitrovic, as a child, believed he would not only become a footballer but would love to play and retire in Newcastle. Back then, as a kid, he owned a couple of Newcastle jerseys. In his words;

Newcastle has been my favorite club ever since I was a small boy in Serbia.

I have followed Newcastle my whole life. I had two Newcastle shirts when I was little.

It was unusual, most people choose a team like Manchester United or Barcelona, but for me, it has always been Newcastle.

Mitro’s love for soccer saw him in 2005 enrolling on the roster of a local Serbian youth team, Partizan, who gave him the stage to kick-start his career and showcase his talents.

A successful youth career came to an end in 2011, the year he turned professional after a loan spell at Teleoptik.

Upon returning, he became a different footballer. Mitrovic led his team to win the Serbian SuperLiga in his first season.

At the age of 18, Mitrović was named among the top 10 talents under the age of 19 in Europe by a selection of UEFA reporters.

After negotiations, Mitro finally joined Belgian Anderlecht, where he went on to score 44 goals in 90 games and won the league’s top scorer in his second season.

This feat attracted his premier league dream club, Newcastle, who acquired him in 2015. After a feud with Rafa Benitez in 2018, Mitro decided his time with his childhood club was over.

In reaction, he requested to be loaned out of the North East club. Fulham in West London became his destination. In his words;

I needed to leave Newcastle because I needed game time and needed games in my legs .

I was desperate to play football, to be on the pitch, to score goals.

He joined Fulham permanently after helping them to promotion to the Premier League in 20118. As I update this Bio, Fabio Carvalho has just fed him with goal assists – which has helped carry Fulham back to the 2022/2023 EPL season. The rest, as they say, is now history.

And behind almost every successful Serbian Footballer (See Nemanja Matić), there’s a glamorous wag or girlfriend, as seen in the name of Kristina, pictured with the love of her life.

With his partner Kristina, Mitrović has a son named Luka and a daughter whose name is unknown. 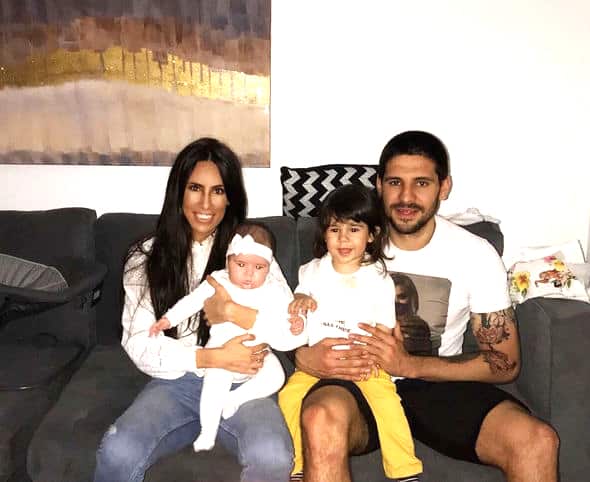 Without a doubt, Mitrovic’s striking ability, as well as his healthy family lifestyle, builds a complete picture of him. 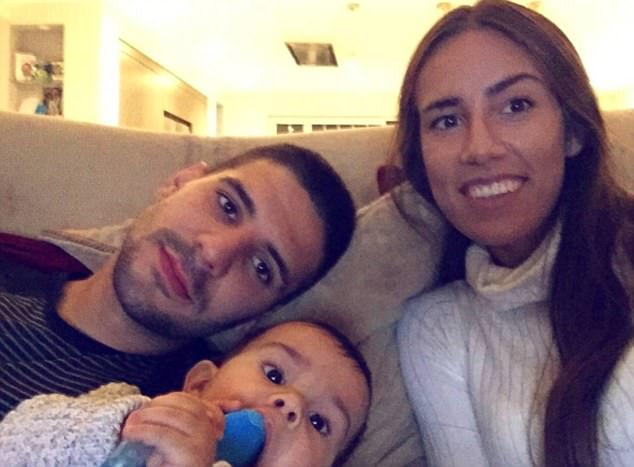 Mitrovic’s physical presence in the box and aerial prowess can only be matched by his fiery and unpredictable temper which is similar to that of Zinedine Zidane. Mitrovic is famous for head-butting opponents himself.

The infamous incident occurred in May 2014, when the Anderlecht star attacked Club Brugge centre-back Bjorn Engels and was duly sent off. Watch Video Below;

It was not surprising to the majority of football fans are aware of Mitrovic’s heated temper, which has earned him a bit of a bad name at his previous club, Anderlecht and in Serbia.

Mitrovic has been described by a Belgian Journalist as someone whose wildcard personality, when compared, could make Mario Balotelli Look Normal. 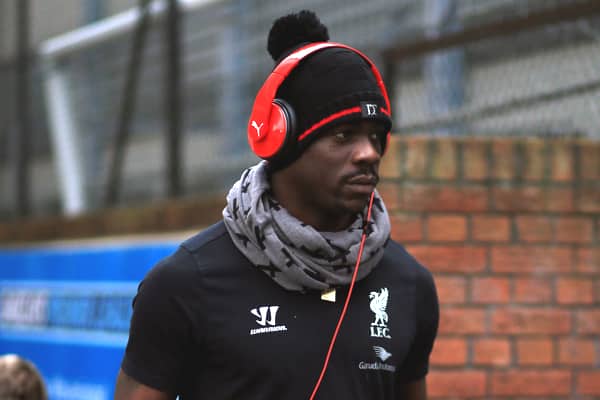 Mitrovic’s celebration (pictured above) needs no explanation as to what people have claimed it represents. Although Mitrovic himself denies it is a cheeky se**al reference. 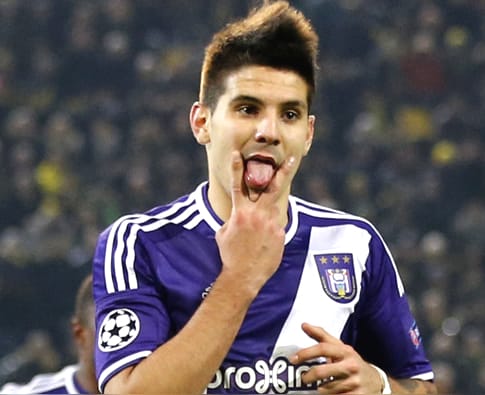 Instead, the Serbian forward claimed that he stuck out his tongue and put his two fingers on either side of it because he was mimicking “cutting off the tongue of his critics”.

Did You Know?… Mitrovic has been dubbed The “Next Zlatan Ibrahimovic” as he comes from his bloodline. 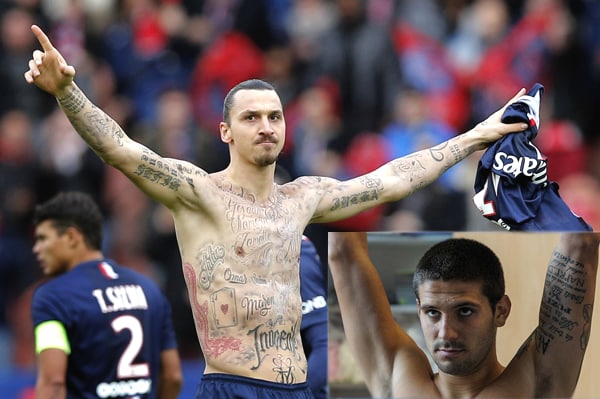 Two reasons exist why Mitrovic has been dubbed the “next Zlatan Ibrahimovic” since an early age.

First of all, Ibrahimovic was born and bred in Sweden; however, his family emigrated from the former nation of Yugoslavia to northern Europe many years ago.

Mitrovic is also from the same area of the former nation which is known for its similar traits.

Thanks for reading our Aleksandar Mitrovic Biography, including his childhood story.

At LifeBogger, we strive for accuracy and fairness in our quest to deliver you Serbian and Fulham football stories.

Surely, the Life History of Dušan Vlahović and João Palhinha will excite you.