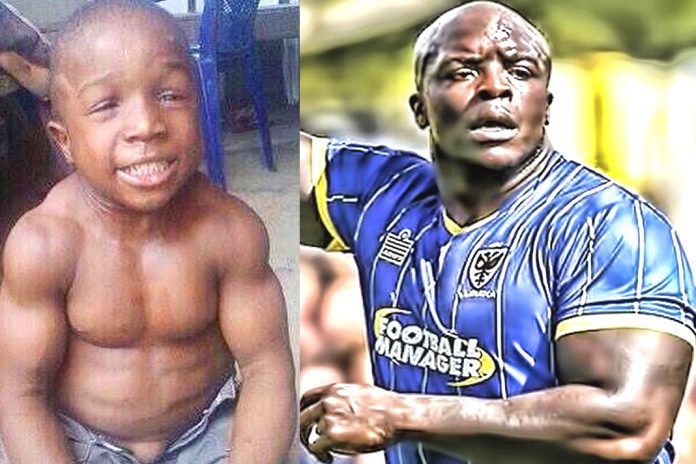 LB presents the Full Story of a Football Genius best known by the Nickname; “The Beast”. Our Adebayo Akinfenwa Childhood Story plus Untold Biography Facts brings to you a full account of notable events from his childhood time till date.

Our Adebayo Akinfenwa Bio does analysis of his life story before fame, family life and many OFF and ON-Pitch little-known facts about him.

Yes, everyone knows about his physical strength and heavy build body but few consider our Adebayor Akinfenwa’s Biography which is quite interesting. Now without further adieu, let’s Begin.

Saheed Adebayo Akinfenwa was born on the 10th day of May 1982 in Islington, United Kingdom. He was born to a Muslim father and a Christian mother.

Akinfenwa’s brawny physique even as a child earned him the nickname ‘The Beast’. Back then as a child, he was a big fan of Liverpool. His favourite player was John Barnes.

He once said… “Back then, I always wanted Steven Gerrard’s shirt. I once told my friend that if anyone gets his shirt before me, we are going to have a problem.” Unsurprisingly, he got the shirt.

Adebayo Akinfenwa hulking frame has not always been a blessing, however, and often proved a burden in his childhood time.

Big from an early age, the result of Nigerian Yoruba heritage and early life of much starchy food made Akinfenwa struggled to get people to see past his size.

As a teenager, he joined the Lithuanian club FK Atlantas on the advice of his agent, whose Lithuanian wife’s brother knew a member of the coaching staff there. He received racial abuse from fans. In his words…

I called my older brother Yemi and said ‘I’m coming home. but he said: ‘You can come home and let them win or stay and show them what you are about. After I got through that year, I thought there is nothing I can’t overcome in football.”

Racial abuse prompted Akinfenwas to return to the UK early in 2003. The ‘Beast’ became a journeyman afterwards.

However, just a handful of matches into his stint, the club suffered a financial crisis and released its professional playing staff. He spent 10 clubs in eight years, including four in one year. A journeyman career.

Since then, Adebayor Akinfenwa has played for 12 clubs scoring 204 goals in 631 appearances. The rest, as they say, is now history.

With paparazzi always on the prowl and numerous ways to connect with social media, it can be difficult to keep your life away from the public eye.

This is the case of Adebayo Akinfenwa who never allows his wife to accompany him to social events and attend high-end parties.

There are no records of past relationships (girlfriend and wife) on the internet. Despite that, Adebayo Akinfenwa uses his kids to let the world know he is a wonderful dad.

This was seen as he once posted a photo of him being dressed as a Father Christmas for his daughters. 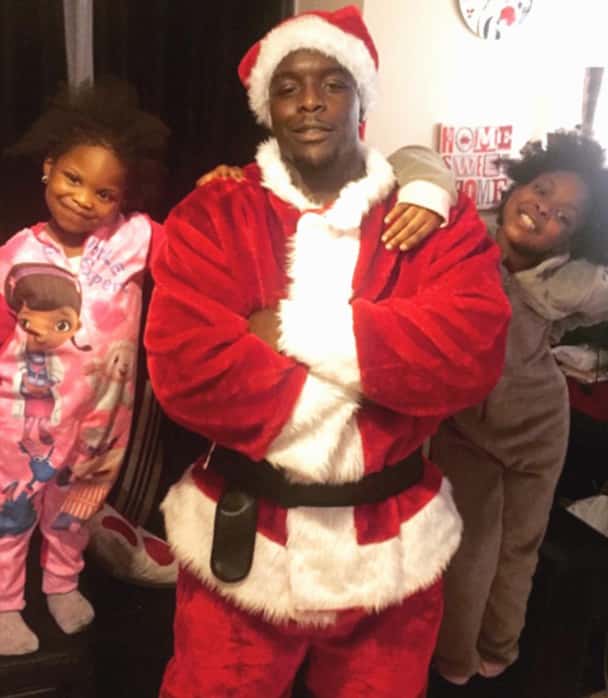 Adebayo Akinfenwa is also known to be a father who spends quality time moulding his son in his own image and likeness. His son who is known to lift mini weight is nicknamed by his dad’s fans as ‘mini beast’. 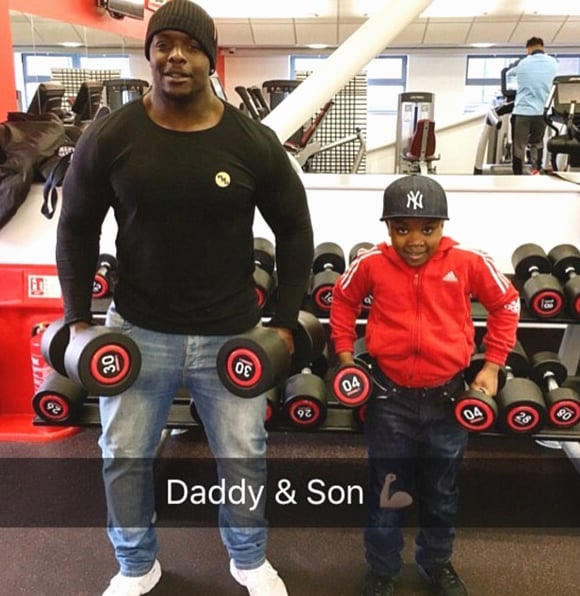 Posting alongside the picture captioned ‘daddy and son’, Akinfenwa wrote: ‘Never can start to (sic) early I guess. Took my lil man to my 2nd office #MiniBeastInTraining.’

Akinfenwa was born to a Muslim father and a Christian mother.

“When Ramadan was on, dad made us fast and then, things changed as I started reading the Bible every day and go to church.

It was my mother’s faith that I was drawn to. I now read the Bible daily and attend church every Sunday.” Says Akinfenwa.

Today, he is a practising Christian who reads the Bible daily and attends church every Sunday.

The striker says he believes he will succeed, no matter what comes from God and the example of his parents. He has brothers named; Dele Akinz and Yemi. Below is a photo of Dele who is a musician. 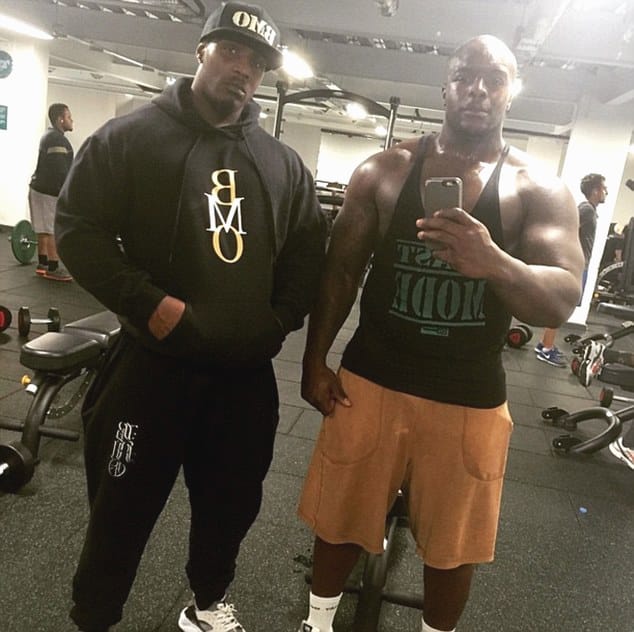 He captioned the above picture post; ‘I & @delemusic just finished in the gym & u can obviously see which one of us came to work out & which one, came to pose. He has not got a drop of sweat on #GymBuddy.’

Numerous rugby clubs and American universities have met his family members to convince Akinfenwa to switch sports because of his size and power. This, however, has fallen on deaf ears. 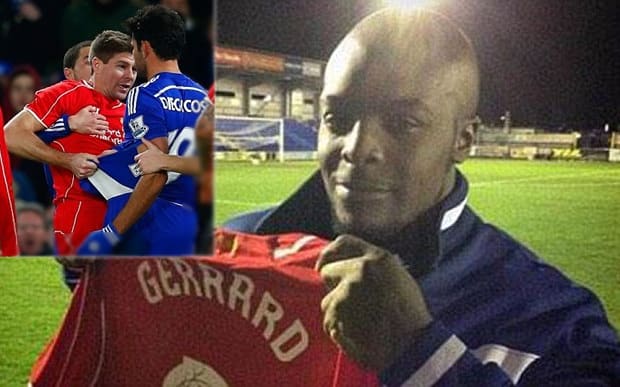 He told Diego Costa..“If there’s one man you don’t want to make angry, it’s ‘The Beast. I’m gonna have to keep it real. If it came down to it I’d have to snooze Diego Costa.

I like him as a player but there’s only one winner if he comes up against me.“ 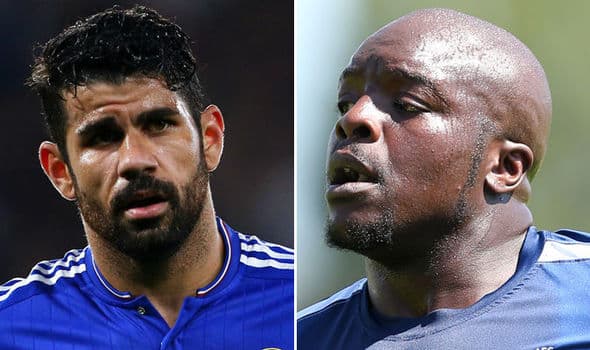 Adebayo Akinfenwa who was a one-time aspirant for president of the Steven Gerrard fan club, Adebayo Akinfenwa, has warned striker Diego Costa over his future encounters with the Liverpool captain. In his Instagram Post;…

Akinfenwa has become well known for being ranked as the strongest footballer in the world in various editions of the FIFA video game series.

In September 2014 he was invited to attend the launch party for FIFA 15 alongside various celebrities and Premier League players such as Rio Ferdinand, George Groves and Lethal Bizzle. 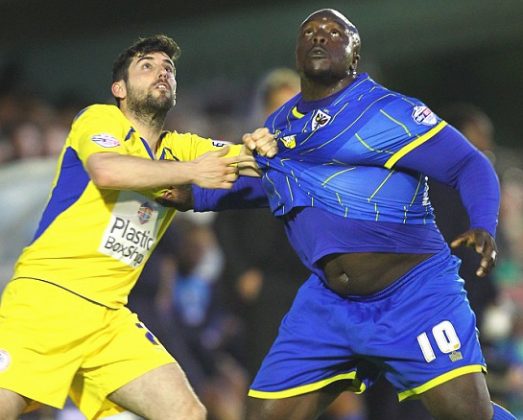 Akinfenwa reportedly weighs around 16 stone (101 kg) and can bench press 200 kg, almost double his own body weight. He runs a clothing label called Beast Mode On which plays on his strongman reputation.

During a certain Monday night’s FA Cup match, there were a whopping 39,000 tweets related to Akinfenwa. #BeastMode was the third most popular hashtag as Twitter went mad for Wimbledon’s cult hero.

“Beast Mode On is a state of mind,” he explained. “Beast Mode is about applying yourself and defying the limitations people put on you.” 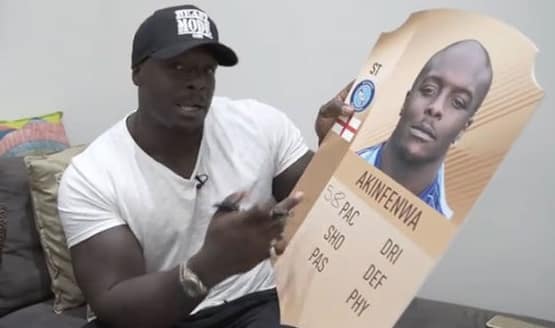 ADEBAYO AKINFENWA was left angry after being told his Fifa 18 rating. He was given a rating of 98 out of 99 which sparked some outrage.

Akinfenwa said: “So you have a better season and you go down – wait, really. 18 goals last season and 50-odd games – where’s the respect?.”

Akinfenwa beat off competition from Christopher Samba who was second, Oguchi Onyewu (third) and Kendall Watson (fourth) as the strongest player.

He then posted a video on Twitter of him lifting weights to further prove his point.

He tagged EA Sports in the tweet and wrote: “Yo @EASPORTSFIFA what’s a brother got to do to get 99strength  #BMO #Fifa18 #ComingForFifa19.”

Akinfenwa is 5ft 11 in but he weighs in at a mighty 16 stone or 102kg. That’s a BMI of 31.3 or around the same body weight as England rugby hooker Tom Youngs.

His burly and rounded figure makes him far from the chiselled, model-like structure of someone like Cristiano Ronaldo.

He says he has always been a “naturally big guy”, and has even struggled to get football teams to take him seriously.

“People said I’m too big to play football,” he said. “One hundred goals later, I’m not. There are no limitations to what you want to do.”

He has a passion for lifting heavy weights and admits that previous managers have had to “rein him in” to stop him from spending too long in the gym. 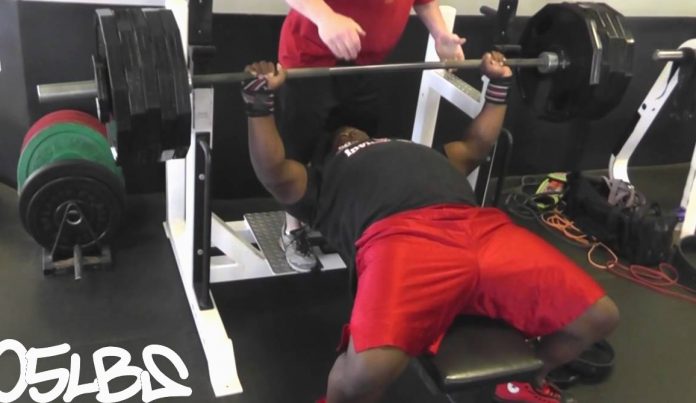 Akinfenwa’s strength has been recognised by the Fifa series of video games, which have deemed him the strongest footballer in the world, with a strength rating of 97 out of 100.

He gets mistaken for NFL players:

Akinfenwa is often recognised as a footballer. Just not always as the right sort of footballer. The striker admits he was once pulled over by a policeman who mistook him for a player in America’s NFL.

Akinfenwa was happy to set the errant copper straight, telling him: “I play proper football.”